Alexander Zverev was among the players to beat in 2017. The 20-year-old claimed the season’s fourth crown in Washington despite his young age. Zverev beat Daniil Medvedev, Kei Nishikori and Kevin Anderson to lift the fifth ATP title. He became the first U20 player with four trophies within a season since Juan Martin del Potro in 2008! In the final, Alexander ousted Kevin Anderson 6-4, 6-4 in 70 minutes for his second triumph over the South African at this event within three years. Zverev lost nine points in ten service games and never experienced deuce or a break point. On the other hand, the youngster earned six break chances and converted one in each set to control the scoreboard and bring the victory home.

It was a fast and floating battle, with almost 80% of the points wrapped up within four strokes, including a service winner in four out of ten points. Alexander tamed the number of unforced errors and had a massive advantage in the most extended rallies, taking 19 out of 23 to earn the victory. They both hit 22 service winners, and Anderson had to create the gap in that segment to challenge the young gun, as he had no tools to survive lengthy exchanges. The number of winners was almost identical. Zverev forged the win in the errors department, hitting 12 and drawing 23 from Anderson. The South African built a slight edge in the shortest rallies, and the German erased that with a dominant performance in the more extended ones to secure the victory in style.

Kevin saved two break chances in the opening game to avoid an early setback before Alexander stole his serve at 1-1 with a crafty lob that forced Anderson’s error. Zverev cemented the lead with three winners in the fourth game, and they both served well in the following ones, hitting 19 service winners in the opening 36 points! The German landed three winners in game eight to open a 5-3 gap and closed the set two games later after 34 minutes. With no service winners to carry him, Kevin sprayed three unforced errors at the beginning of the second set to find himself a set and a break down. Using this momentum, Zverev produced comfortable holds in one game after another, firing three winners in game eight to move within a game from the title. Alexander served for the title at 5-4 and landed three service winners to seal the deal and celebrate the first title at the ATP 500 level. 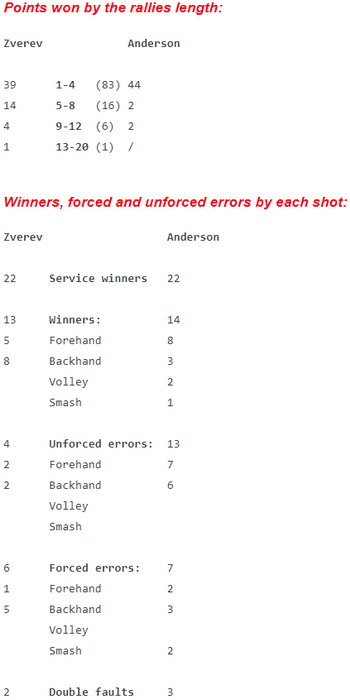