Since the start of the Open era, 27 players have scored at least 110 victories at Majors. Rafael Nadal is the third with over 300 triumphs, and 110 of those came at his beloved Roland Garros. The 13-time champion is on a mind-blowing 110-3 record in Paris, securing 13 titles from 17 trips to the French capital and seeking the 14th in four days. Nadal was equal with Roger Federer ahead of Roland Garros, with both players achieving 105 triumphs at their favorite Major events. The Spaniard moved in front of the Swiss with another rock-solid performance in Paris and became the first player with 110 wins at a single Major. Rafa made a winning Roland Garros debut in 2005, and he has been the one to watch in Paris in almost every season. The Spaniard has made 15 Roland Garros semi-finals from 18 trips to Paris, and he seeks the 14th title this week. Nadal kicked off his 18th Roland Garros campaign with a 6-2, 6-2, 6-2 triumph over Jordan Thompson, becoming the first player with 106 wins at a single Major.

Rafa beat Corentin Moutet 6-3, 6-1, 6-4 in the second round after breaking the rival’s serve seven times. In another similar clash, Nadal ousted Botic Van De Zandschulp 6-3, 6-2, 6-4 in two hours and 11 minutes for a place in the last 16. Thus, he set the fourth-round clash against Felix Auger-Aliassime, his first notable opponent. Nadal prevailed 3-6, 6-3, 6-2, 3-6, 6-3 in four hours and 21 minutes to reach the 16th Roland Garros quarter-final. Rafa created 22 break points and seized only six while getting broken four times. Nadal made a fresh start in the decider to overpower the young gun and set the quarter-final clash against Novak Djokovic.

It was their 59th encounter on the Tour, and Nadal earned a 6-2, 4-6, 6-2, 7-6 triumph in four hours and 12 minutes. Rafa dethroned Novak after a rock-solid performance in sets one and three, playing with bigger desire than the Serb and making a brilliant comeback in set number four to reach the semis. The Spaniard fired almost 60 winners and grabbed seven breaks from 17 chances. Despite not playing at his best, Djokovic could have forced a decider, leading 5-2 in the fourth and creating two set points in game nine. Nadal erased them, broke back and prolonged the set. He had a boost and used it nicely in the tie break, winning it 7-4 to emerge at the top and celebrate the 110th Roland Garros triumph. 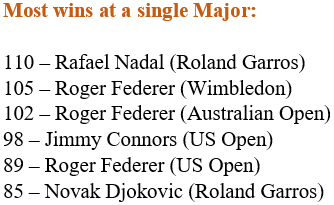