On Monday, Novak Djokovic wrote history after winning his 31st five-setter at Majors, leaving Roger Federer on 30! World no. 1 had to dig deep against the young gun Lorenzo Musetti, who was making a debut at Majors in Paris. Super talented Italian won the opening two sets before Novak took charge to build a 6-7, 6-7, 6-1, 6-0, 4-0 advantage in three and a half hours before Lorenzo retired and sent the Serb into the last eight. Dropping only 14 points after the second set, Djokovic stormed over Musetti to avoid an early exit and stay on the course towards the 19th Major crown and the second in Paris. Tied with Federer on 30 five-setter triumphs at Majors, Novak has now become the leader of the pack, securing his fifth comeback from two sets to love down to add another milestone to his already impressive tally. Nine players have scored at least 24 five-setter wins at Majors in the Open era, led by Novak Djokovic, Roger Federer and Pete Sampras, proud owners of 52 Major crowns!

Novak Djokovic became the first player with 31 five-setter wins at Majors since 1968.

Djokovic’s first Major win in five sets came against Guillermo Garcia-Lopez at Wimbledon 2005, adding five more in the next three seasons. Since Wimbledon 2010, the Serb is 24-5 when a Major match goes into a deciding set, a true testimony of his brutal mental and physical strength that made him one of the greatest players of all time. Since Wimbledon 2014, Novak has won 13 of the last 15 five-setters at the most notable scene, doing enough to steal the record from Roger Federer. It wasn’t easy for Novak to achieve it yesterday, though, playing the opening two sets for two hours and 20 minutes and struggling to overpower the young opponent.

Musetti was the more composed player, taking them in the tie break despite having nothing to separate them. Still, a teenager couldn’t follow that pace in the rest of the clash, struggling physically and standing powerless against the rival who raced his level to dominate until the very end and avoid an early exit. Lorenzo played on a high level in the opening two sets, throwing everything at Novak and beating him in the crucial moments to build a massive lead before fading from the court. 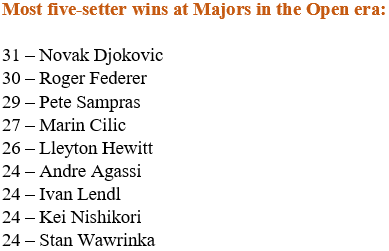