The 45-minute, Round 12 race was a bit of a heartbreaker for Rollan, who started from pole position and lead every lap until the final one.

The race’s only full-course caution came late in the race and set up a two-lap dash to the finish.

Mazda MX-5 Cup championship heats up as it heads west

On the restart, Rollan got wide in Turn 2. But he wasn’t alone as most of the field behind him also brought too much speed and enthusiasm into the corner. Everyone was able to recover as Wagner pulled alongside, but Rollan was able to stay with him and hold the lead.

“I guess I got too deep in on the brakes, maybe they weren’t warm enough, but I had nothing on the pedals, and I went straight,” Rollan said. “Luckily my competitors followed me through. I really don’t know, it seems like all of our tires were not up to temp and we were sliding everywhere, and Gresham slid in turn three and I got him there, but that was crazy.”

On the final lap, Wagner had a second shot to make the pass in Turn Two and this time it stuck. Wagner crossed the finish line 1.377s ahead of Rollan.

“With a restart with two to go, it really is just whatever situation is thrown at you, you have to take it and run with it,” Wagner said. “So I was pretty content to take a second-place finish after the win yesterday. But you know, it got so crazy there and an opportunity presented itself, so I had to go for it, and it ended up working out. It takes a lot of trust from everyone and a lot of good racing to come out of that with everyone still running and on track to make it to the line.”

“I was happy to get second, get the pole, get the most laps led,” Rollan said. “It was a great Hixon Motor Sports MX-5 Cup car, it was handling well. I think Gresham did a good job staying behind me and keeping the pressure on and congrats to him.” 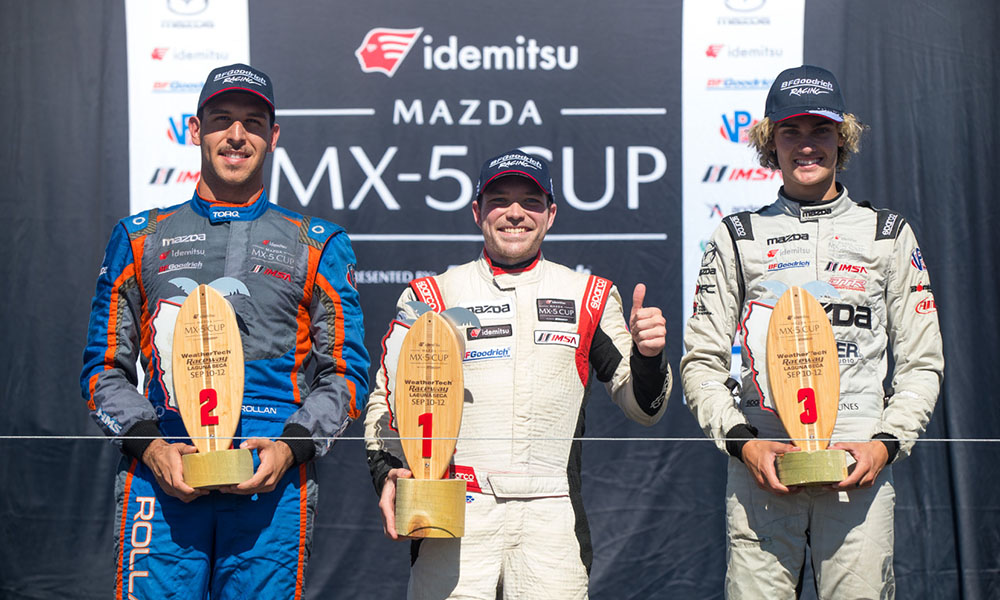 With the double victory, Wagner takes over the points lead with just two more races left on the schedule.

“When it comes down to the championship being this close, a weekend like this is even more important than earlier in the season,” Wagner said. “It’s really going to come down to 10 points here and 10 points there, so to get both wins and maximize the points haul going into Road Atlanta – it’s a perfect situation. But you know, as quick as it’s come to me this weekend, it can go away in Rounds 13 and 14. It’s definitely good to have the momentum and to be on top heading into the final round, but it’s still so easy to slip up and lose a few points. It’s really going to come down to the final race of the season. I got a little bit of margin, but not much.”

A third-place finish for Nunes was a welcome result after a disastrous Race One, where contact with Rollan damaged his car and killed his pace.

“Yesterday was a little disappointing as you had mentioned but there’s always things we’re learning from, that’s why we’re out here racing in MX-5 Cup,” Nunes said. “I learned to stay back, not dice for the lead early on in the race and we did that today. Today’s race, it was intense. We rode in third. There was a yellow right near the end and that’s when we needed to make the charge to the front. We all kind of butchered the second corner there, everyone pushed wide, it kind of turned it into about an eight-car race. I fell back to fifth, back up to third, and that’s where we finished. I diced with Selin a little at end. We had a little kiss and a make-up from yesterday because we got to dice clean today.

“So overall, it was a great race,” continued Nunes. “I’m on the podium, that’s great for points. I couldn’t have done it without my BFGoodrich tires keeping me hooked up, my Kicker Audio keeping me cool and collected throughout the race and my Sure Can gas can keeping my car powered. Thank you to them and thank you to all the fans.” 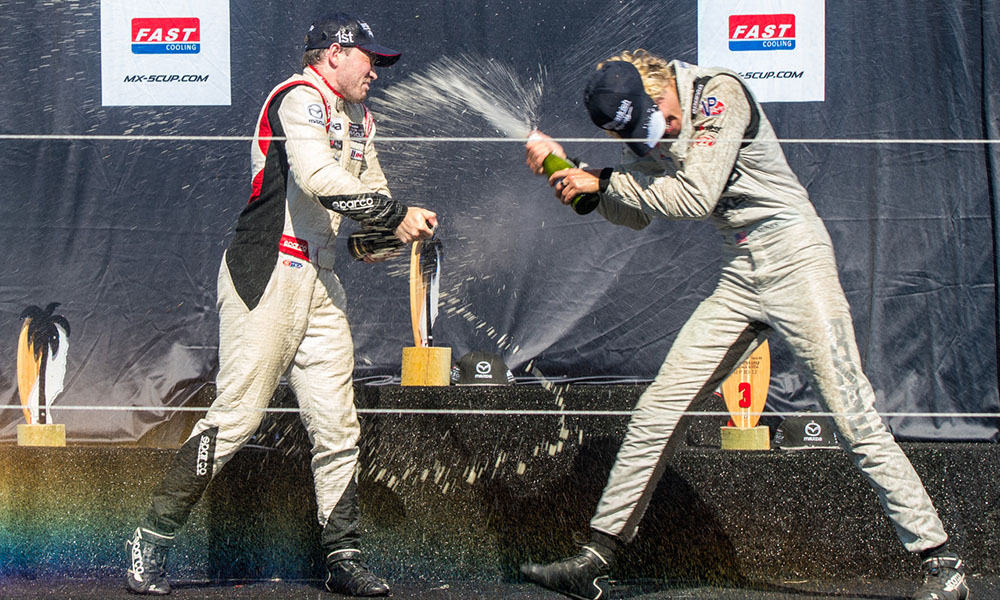 Behind Nunes, a pair of rookies, Luca Mars (No. 41 Copeland Motorsports) and Sam Paley (No. 28 McCumbee McAleer Racing) finished fourth and fifth respectively. This further tightens the battle for Rookie of the Year, which comes with an $80,000 prize from Mazda.

If style points were given out in Mazda MX-5 Cup races, Paley might be going home with some bonus points. On the opening lap he went spinning through the sand in Turns 9 and 10, held on, got the car straightened out and rejoined the race without issue, although in last place. The Rookie of the Year leader then charged back to a fifth-place finish, ensuring he maintained that lead.

Just behind Paley was Michael Carter (No. 08 Carter Racing Enterprises) who had to start from the back because of a transponder issue in qualifying. Carter was able to climb through the field and finish sixth. 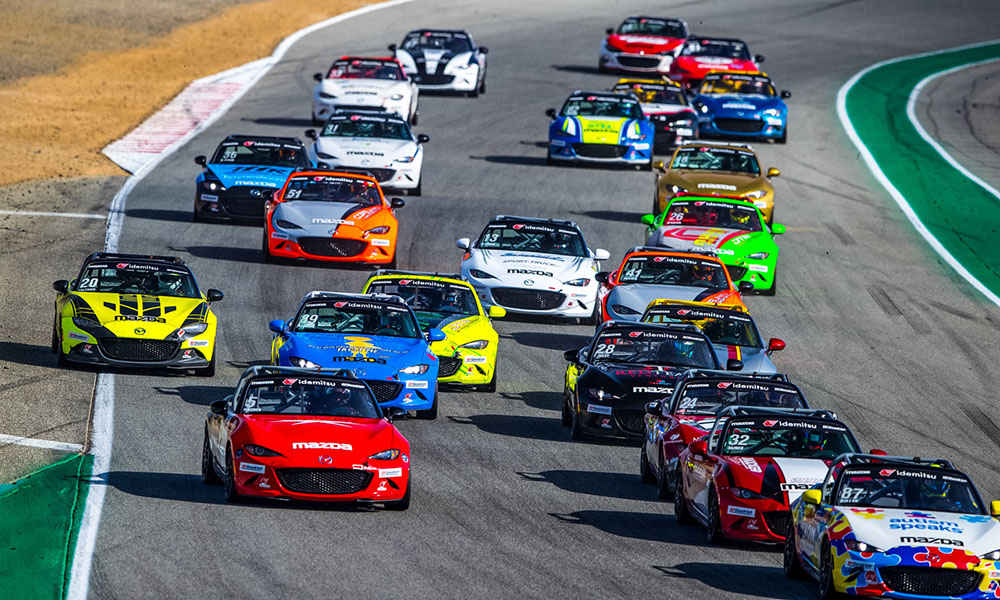 While watching those around him make mistakes, Moisey Uretsky (No. 55 McCumbee McAleer Racing) kept his nose clean and his tires on the track. This helped him climb eight positions in the race, from 17th on the grid to ninth at the finish, earning him the Hard Charger Award. The prize comes with $1,000 for him and $1,000 for his crew chief.

“Keep your head up and avoid all the carnage, that’s my advice,” Uretsky said. “Just keep your eyes up, because there’s always something happening on track. But that’s why we love it, because there’s a lot of tough racing. It sucks when people have contact and they go off, but that’s part of why we race hard. It’s because you’re racing so close that mistakes are bound to happen, but if you didn’t race that close, it wouldn’t be as much fun.”

If you missed any of the MX-5 Cup craziness from WeatherTech Raceway, the races will air on NBCSN, Tuesday, September 21, at 4pm ET.

Only two more races remain in the 2021 Mazda MX-5 Cup and they are nearly eight weeks away. Rounds 13 and 14 take place at Michelin Raceway Road Atlanta, November 10 – 12. That leaves the title contenders a lot of time to think about the $250,000 up for grabs from Mazda for winning the championship.