Zach Veach has been searching for his next move in motor racing. The Ohioan trained extensively on the Mazda Road to Indy, won plenty of races, found a sponsor in Gainbridge to take to Andretti Autosport to fund a three-year run in IndyCar, and turned his attention to IMSA and sports car endurance racing when his open-wheel journey came to a premature conclusion.

The 2021 season marked the end of the 27-year-old’s full-time participation in the sport. Entering the new year without a regular role to fill in racing, it marked a radical change for someone who spent every day of life–since his early teens — with driving as the center of his world. For the first time in a long time, he’s had a chance to stop, breathe, and take stock of where he wants to go in life.

Veach, one of the genuine good guys in the paddock, is figuring out where he belongs while enjoying the path that leads to an unknown destination.

“I’m trying to get back into IMSA, but that’s not easy and could take a while,” Veach told RACER. “And then the main thing that’s been cool lately is I’ve started coaching Ernie Francis Jr. with Force Indy in Indy Lights. I started working with him at Iowa, working with him and [team principal] Rod Reid, and they’re really good people. It’s been a lot of fun going back to like the Lights level and taking on a new role.”

As so many professional racers have done when faced with this kind of crossroads in their career, Veach has turned to driver coaching as a way to support himself and pass on a decade-plus of expertise to the next generation. From 2013 through 2016, Veach won six Indy Lights races and placed as high as third in the championship. Shortening the vast learning curve for Trans-Am star Francis Jr., a rookie to Indy Lights, is a perfect task for Veach.

Veach has learned about racing on the other side of the pitwall by coaching Ernie Francis Jr. in Indy Lights. James Black / Penske Entertainment

“Ernie is adapting to it pretty fast (although) he hasn’t had a lot of open-wheel time,” he said. “So for me, it’s been very rewarding to work with him. We’re starting to get into a groove with each other — we were at Sebring last week and they actually put me in the Lights car for about eight laps. That was the first time I’ve driven the car since 2016, and wow.

“So after my first four or five laps in the car, I’m like, ‘Hey, this thing’s not very good in the brake zones. Like, I’m really struggling getting the car slowed down, and I’m having rear lockups really quickly.’ The engineer’s like, ‘Well, let me look at data real quick.’ He comes back and says, ‘OK, yeah, you’re braking about 60 feet deeper than you should with about 500 psi more on the brake pedal… it’s a Lights car, not an Indy car, so pull it back and you’ll be OK.’ That was funny, but honestly, it feels nice in a way to do something for someone else, you know?”

Veach has also ventured outside of his comfort zone, trading Indy cars and production-based GT3 machines for something quicker and scarier, and he’s working on an undisclosed app as a new business venture.

“This year, as I’ve been instructing and trying to build some other things outside of motorsports, I’ve had an opportunity to do some sprint car racing with a local team owner from my hometown named John Kubricks,” he said. “So I’ve been a teammate to Brandon Wimmer at a couple of races in a winged 410, which has been the most violent, insane form of racing I’ve ever been a part of. Brandon was laughing at me because after my first laps in a sprint car, I got out of the car just wide-eyed and shaking.

“And he couldn’t believe that it was more chaotic than the start of Indianapolis, but it was. The thing about sprint cars is there’s no build-up to the speed. When the green flag drops, you’re instantly sideways, wheels off the ground, getting after it. It’s such a just brutal form of racing, but there’s something to it that’s so pure.” 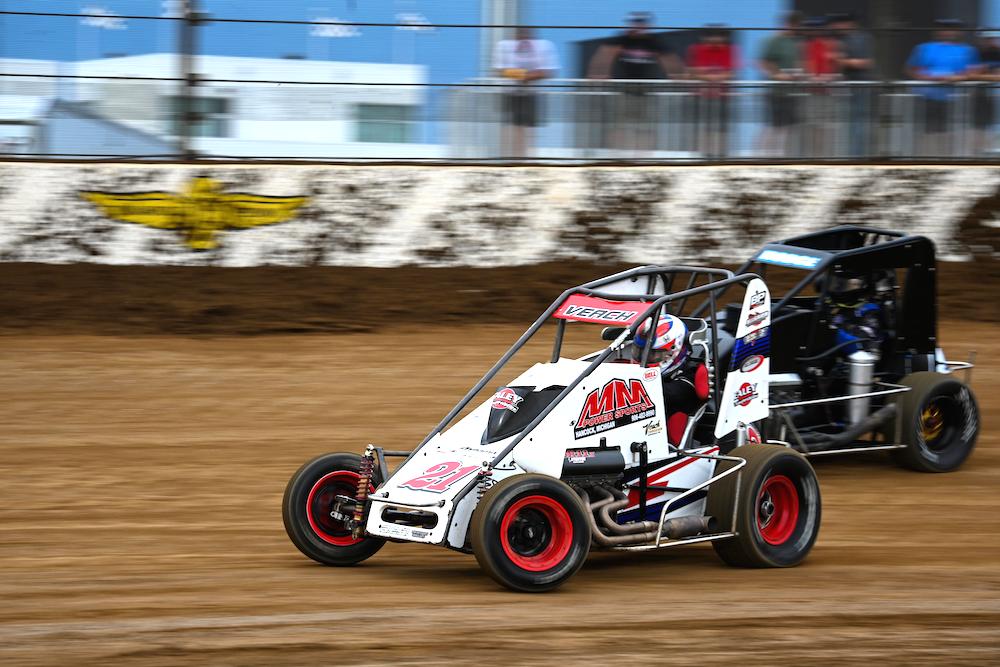 Veach will step out of his comfort zone to race this midget car in the Driven2SaveLives BC39. James Black / Penske Entertainment

Inspired by what he’s found in short track racing, Veach entered this weekend’s BC39 race at the Indianapolis Motor Speedway, named in honor of the late oval maestro Bryan Clauson who also made a few Indy 500 starts.

“I always looked up to Bryan when I was younger because he was like my upperclassmen,” Veach added. “So seeing him get his chance in Indianapolis, I always had a lot of respect for Bryan and as I’ve gotten my feet wet in dirt racing, the BC39 and the Chili Bowl had always been on my list of things that I wanted to do if I ever got the shot.

“This will be my first time ever racing a midget and my third-ever dirt race. So the expectations around the weekend are about learning. I’m so excited and just looking at this year is like all just learning and hopefully becoming good enough to belong with them. I just respect them to the utmost.”

Being away from open-wheel for a little while has been a powerful tonic for Veach. Through coaching Francis Jr, racing sprint cars, and trying to earn the respect of the midget racing community, the pull of his original dream has returned.

“The perfect year of racing for me would be doing some short track racing, going full-time again in IMSA and coming back to do the Indy 500,” Veach said. “Because I’ve spent enough time away now but I can show back up at the paddock and I’m very happy and fortunate to be there coaching Ernie. And I honestly didn’t realize how much I missed my IndyCar family until the Iowa weekend.

“I showed up to help Force Indy and all my old mechanics from various teams and engineers and everyone was so happy to see me back in the paddock that it was it was very heartwarming. I don’t know why I stayed away for so long. I need to get back, at least to Indy, so that’s also something I’m working on. To come back and feel so welcomed, man, I can’t really say how much that actually meant to me.”