A stunning run of stage wins put Toyota’s Elfyn Evans in the lead, and the chasing Hyundais of Ott Tanak and Craig Breen searching for answers, after day two of maximum attack on WRC Rally Finland.

Irishman Breen and Estonia’s Tanak had ended day one holding a 1-2 lead in their factory Hyundai i20 Coupe WRCS, but a stunning run of four straight stage wins on Saturday’s morning loop put Welshman Evans out front in his Yaris WRC.

Tanak fought back, finding better grip and feel from his Hyundai to earn fastest times in the afternoon’s opening three stages. But Evans’ scorching time in the fading light of the last of the day’s super-fast, gravel forest stages, 12.77-mile Patajoki 2, left him 9.1s ahead of Tanak.

And with the duo sharing fastest time on the final stage of the day, a 1.44-mile asphalt/gravel blast around the streets of host town Jyvaskyla, that’s the gap Evans takes into the four special stages and 28.42 competitive miles of Sunday’s third and final leg.

“It’s been a good day. I really enjoyed it,” said Evans, whose best Finnish finish is a second with M-Sport Ford in 2017. “It’s been a great fight so far. Obviously, there’s still a long way to go tomorrow, so we’ll just take it stage by stage.”

Like Evans, Tanak had started day two on full attack mode, but felt that his Hyundai’s handling was holding him back just a little in his developing duel with the Yaris driver — “We have our limits and this is our limit, so I keep going on this pace,” he noted.

But in the afternoon, the i20 was in its sweet spot and a confident Tanak was able to unleash the pace that had seen him win here in 2018 and ’19. So what had he changed on the car?

“Nothing,” said Tanak. “The roads changed and I could manage the car better. It’s good for Hyundai to be on the pace in Finland — it’s a big step. Obviously, Elfyn’s pushing quite a bit, too, so the pressure’s there, but it’s fun.”

Tanak and his Hyundai were in their element in the afternoon stages. McKlein/Motorsport Images

Suffering most from the on-the-limit scrap between Evans and Tanak was overnight leader Breen. The Hyundai driver had more than held his own on Friday’s six-stage leg, but received a day-two reality check. It wasn’t that he’d dropped his pace; it was the fact that the lead pair had found another level. Breen lost the overall lead to the charging Evans on Saturday’s third stage, and dropped to third behind Tanak on the sixth.

“Yeah, the two boys are hammering it,” said Breen, who is running only a limited 2021 schedule with Hyundai. “When you have it in your hands and it starts to slip away, it’s disappointing. But we have to be realistic.I know that’s not what people want to hear, but to get that last one percent at 200km/h (125mph) in the forest is really difficult. That last little bit, we need to find it.”

With a Welshman, Irishman and Estonian holding the top-three places, the Finnish fans didn’t have a whole lot to cheer about. Local hero and pre-rally favorite Kalle Rovanpera, who’d finished day one a disappointed fifth, ended his rally in Saturday’s fourth stage. Trying to save his Toyota Yaris WRC after a big moment on a fast left-hander, the 21-year-old Finn over-corrected and hit a gravel mound to severely damage his radiator. Game over.

That left Esapekka Lappi to uphold local honor in a privately-entered Yaris. The car is two years old (Tanak drove it to his 2019 Rally Finland win, before switching to Hyundai in 2020), and Lappi hasn’t driven a World Rally Car since last December’s 2020 WRC closer, so fourth overall, albeit 44.8s off the flying Evans, is a stout effort so far.

“Yeah, it’s OK, pretty good,” said Lappi, who won the event for Toyota in 2017. “Because the rally is two months later than usual, I think the roads are firmer than in the summertime, so it’s not too bad for ruts. We’ll keep trying, but those guys are not catchable now.” 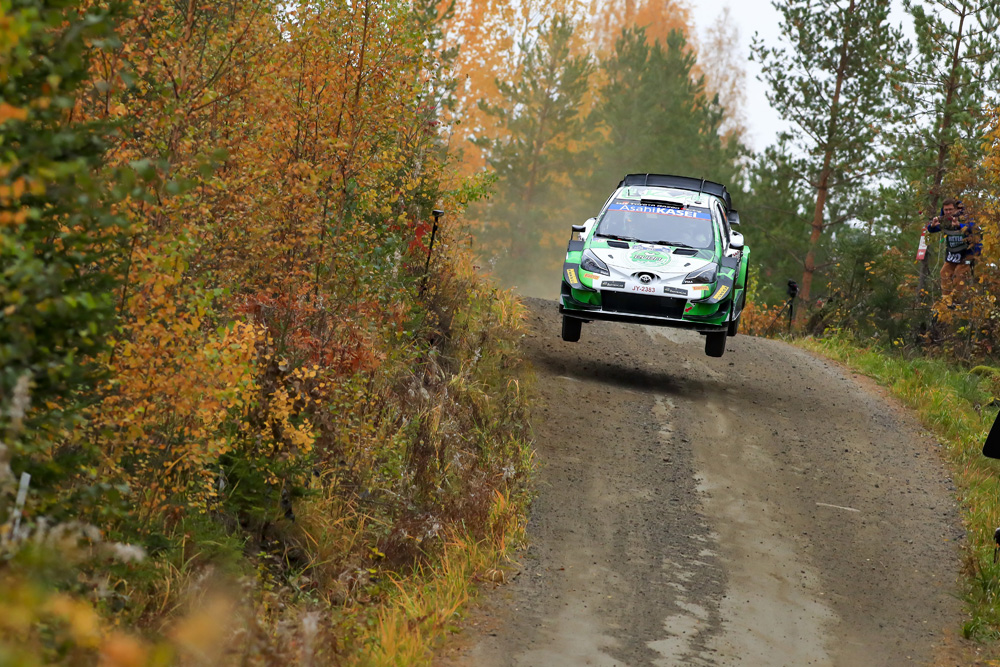 Lappi quickly was back to his old form in a privateer Toyota Yaris. McKlein/Motorsport Images

Fifth for WRC points leader Sebastien Ogier wasn’t down to a boost in pace, but rather the retirements of teammate Rovanpera and Hyundai’s Thierry Neuville, who suffered a terminal water leak in a heavy landing from one of the rally’s numerous signature jumps.

“The afternoon loop was much better,” said Ogier, who finished the day a cavernous 1m23.7s down on Evans’ Yaris. “A setup change we made was good for my confidence. At least it’s going the right way now.”

But if Ogier’s deficit highlighted the incredible pace of the leaders, M-Sport Ford was barely in the same zip code. Its Fiesta WRCs hold sixth and seventh overall, with Gus Greensmith at 4m16.9s behind Evans and Adrien Fourmaux an eye-watering 5m31.5s from the leader.

In WRC2, the second-tier of international rallying, Teemu Suninen’s Volkswagen Polo GTi sits 8.0sec clear of Mads Ostberg’s Citroen C3, despite the Finn suffering a scare with a holed radiator in the afternoon loop.

“It’s always nice to have a battle in Finland,” said Norway’s Ostberg. “It’s been a big one so far with Teemu, but I’m up for the fight, so we’ll see tomorrow.”