A fond reader of Sylvia Wilkinson’s writing (I devoured “The Stainless Steel Carrot” in a little over a week), I was delighted to hear that our good friends at Racemaker Press were publishing an updated printing of her 1982 book, “Dirt Tracks to Glory: The Early Days of Stock Car Racing As Told by the Participants.”

I wanted to make sure the book was available in the RACER Store (which it is) but I also had a few questions of my own after receiving a copy. I sent her a list of questions which she promptly answered in Sylvia Wilkinson storybook style!

For more information or to order “Dirt Tracks to Glory” in the RACER Store, click here. -Nick Lish

It seems like I backed into writing about racing. In the 1960s, when my first three novels were published by Houghton Mifflin, my publisher suggested I should write a book about my passion, auto racing. My first thought was they decided I was having too much fun and planned to make my weekend life as miserable as my fiction-writing life. (Back then I used to tell myself if I wrote x number of pages on my novel then I could go to the races on the weekend. It was my definition of self-discipline.)

So I did “Stainless Steel Carrot” for H-M—a year and a half with a racing team for a book I had to put together in four months. That publication brought World Book to my doorstep to cover racing; Children’s Press to write books that little boys would read; the Hardy Boys folks to make me Eric Speed so I could write racing mysteries; and more.

It was an income, albeit not grand, to replace my university teaching job at UNC after I had resigned in protest over my pay as a female.

Then my mentor Dr. Louis Rubin decided to open a publishing company in the South. The new Algonquin wanted a stock car racing book for their first list in the early ’80s. He knew I was involved in racing and had pushed me to do the Carrot; but he didn’t know that the stock car guys had tossed me out on my ass at Daytona in the ’60s with rules on their side.

He also knew I couldn’t say no to him since he’d meant so much to my writing career. So off I went, using a tape recorder for the first time in my life (I did the “Carrot” all with handwritten notes), then laboriously transcribing the interviews. Dr. Rubin asked me to write intros to each interview and also to explain racing to neophytes like himself. When “Dirt Tracks to Glory” finally appeared, Dr. Rubin got all excited about the book as part of a history of the South, so he decided to pursue a second edition through a university press.

Then 9/11 happened and that was canceled. At that point my agent swore off university presses since they chose to ignore a signed contract.

In the meantime, a third of my original photos got pinched from the publisher’s archives after Algonquin was sold to a big New York publisher.

Fast forward to the present: Steve Johnson, the unsung hero of all the great black and white shots in the current book, looked back over the original printed copy and said he’d like to see if he could bring them back to life. Also I still had a lot of shots we hadn’t used in the first book. The original photos came from three sources (remember no internet 40 years ago): Bill France Sr. let me go into his archives at Daytona Beach and take anything I wanted. (I discovered that many of the negatives were coming apart so I think that in a way, I saved the photo history of early stock car racing); Humpy Wheeler at Charlotte Motor Speedway did the same; and the participants let me borrow their personal copies if I would promise to return them. 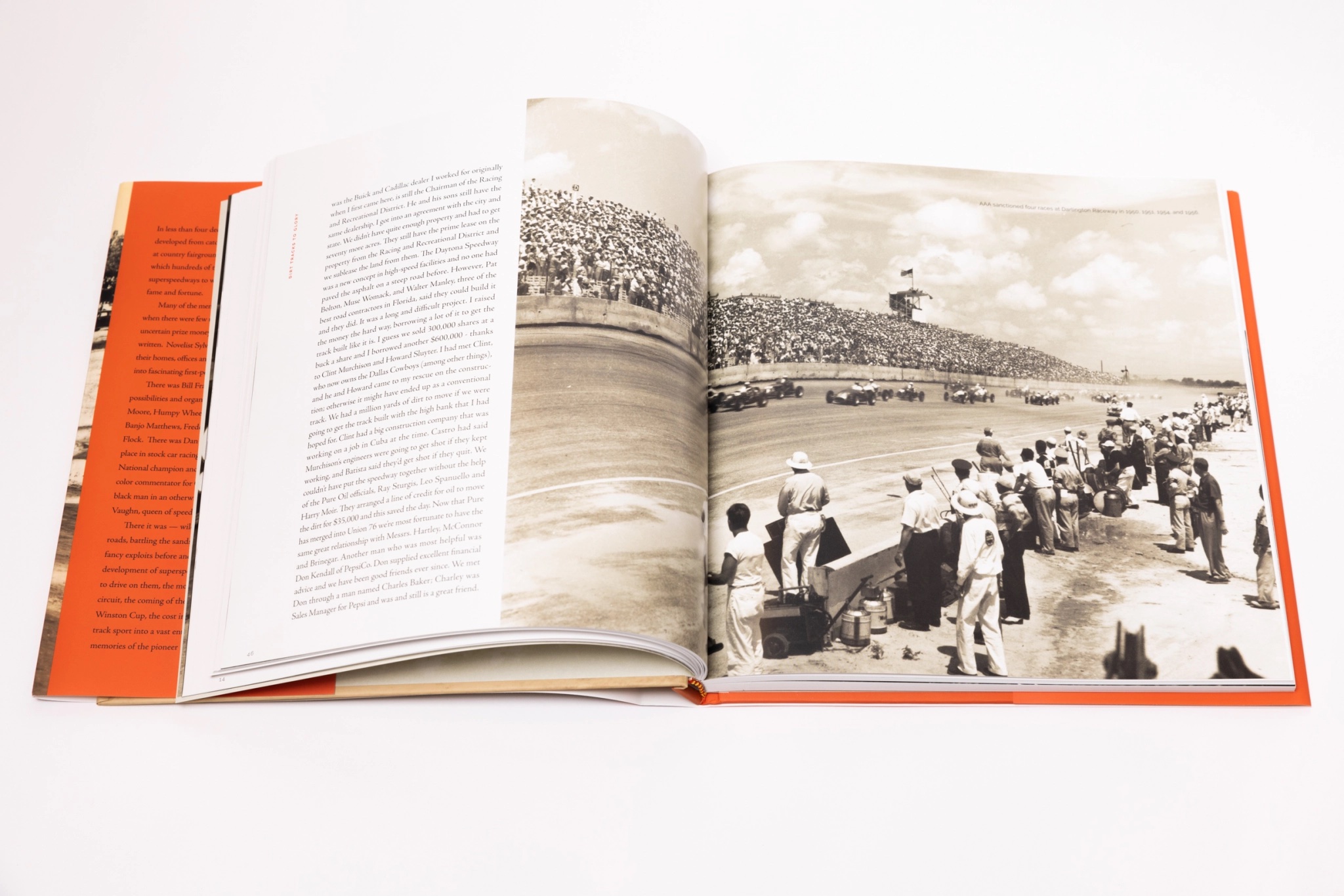 I love old black and white photos. To me, some of the most moving shots I’ve ever seen were from Ken Burns’ Civil War documentary which I could never even dream of duplicating. I read about Racemaker Press in an article by Preston Lerner so I wrote the publisher: Joe Freeman and found he still had a copy of the old edition, was fond of it and would like to reprint it. That is how the new edition happened.

Johnson took the old voice tapes and transferred them to modern digital form so they wouldn’t be lost. I never listen to them but did use some of the material that wasn’t suitable for Dirt Tracks in my sixth novel On the Seventh Day. The late Leon Mandel, who had read my fiction and decided to groom me as a racing journalist for Autoweek, encouraged me to write a novel about racing. Two southern brothers emerged from those interview and my imagination for Seventh Day.

The designer of this second edition, Tom Morgan of Blue Design, liked to alternate between regular and sepia and did some design things with the black and white that is all over my head. Steve did great work, too. Example? Look at the photo of Louise Smith on page 78. In the original, you couldn’t see her smiling in her wrecked car after they pulled it out of the Eno River and she climbed back in for a photo-op. Also the dust cloud behind the cars on the back cover had been lost.

I used to go to the track in Hillsborough — where Louise Smith and the rest raced — with my brother when I was a little girl. He would tell Mother that he was taking me along so she figured it must be an OK place that we were going if he didn’t mind my tagging along. I credit my big brother with broadening my experience! And my Southern father with encouraging me with ditties: “They told Little Sylvia it couldn’t be done, but with a smile she went right to it. She tackled the job that couldn’t be done, and found that she couldn’t do it.”

Read the full story at VintageMotorsport.com.