This story appears in the June/July 2021 ‘Heroes Issue’ of RACER magazine alongside other great features including an interview with Helio Castroneves on his ascension to the Indy four-timers club, Robin Miller’s exploration of the making of A.J. Foyt, an overdue reappraisal of Nelson Piquet’s career, and the inside story of Robert Wickens’ recent return to the cockpit. Click here to get your copy, or set yourself up for a full year of stellar motorsport writing and photography with a print or digital subscription.

A decade before Ted Horn swept his Maserati 8CTF to three consecutive AAA championships between 1946 and ’48, novelist Thomas Wolfe completed a work whose title eventually made its way into everyday conversation: “You Can’t Go Home Again.”

Dario Franchitti’s interest in mid-20th century American literature is open for debate, but the Scot clearly has little regard for Wolfe’s sentiment. At the end of 2007, the newly-crowned IndyCar champion quit open-wheelers in search of a new challenge. Less than a year later, after a soul-bruising foray into NASCAR, he’d agreed terms with Chip Ganassi Racing to return “home” to IndyCar, whereupon he immediately produced a period of dominance that may never be repeated.

The three championships that Franchitti claimed between 2009 and ’11 echoed Horn’s achievements six decades earlier, but unlike Horn — who was ludicrously unlucky at the Brickyard — Franchitti added a second Indianapolis 500 victory to the one he’d already earned with Andretti Green in ’07, and then tacked on a third Indy win as an exclamation point to the whole thing in 2012.

Of all the many things that are remarkable about Franchitti’s streak, one of the most striking is how close it came to not happening. Never mind the thousands of things that need to fall into place to win a championship, and then another, and another after that. His mere presence on the starting grid of 2009’s season-opener at St. Petersburg in Ganassi’s No.10 was only possible due to a very precise sequence of events, the first of which was an about-face on his decision to quit IndyCar.

“I’d accomplished what I wanted to accomplish, which was winning a championship and winning an Indy 500,” says Franchitti of his initial desire to move on. “I’d actually made a decision after winning the 500 [in 2007] that it was almost mission accomplished, and I could feel that I was going to need new motivation. Winning the championship that year put the stamp on it, but I’d made the decision already by that point. So it was a long-term deal with Chip [Ganassi] to do NASCAR [in 2008]. But pretty quickly, the dominoes fell. The first time I drove the car, I realized I’d made a mistake.”

His ill-fated NASCAR foray has been well-documented. Poor results and a lack of funding were compounded by a broken ankle sustained in a crash at Talladega. After recovering, Franchitti returned for a handful of races before Ganassi was forced to shutter the self-funded No. 40 Cup Series team mid-season. Franchitti went on to make some starts in the second-tier Nationwide Series, picking up a fifth at the Watkins Glen road course, but less than a season into this new chapter of his career, he was heading toward another crossroads. 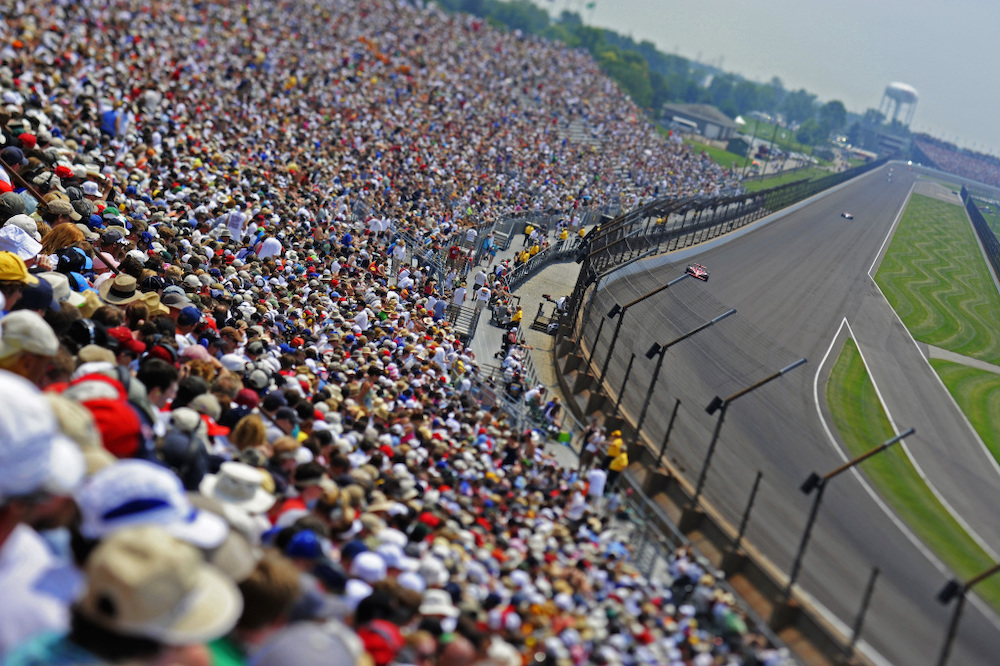 Franchitti started third, hit the front on lap one, and went on to lead 155 of 200 laps on his way to a second career Indy 500 victory in 2010. Williams/Motorsport Images

“By that point I was looking at a future in sports car racing,” he says. “I’m quite good at convincing myself of things – I think it’s part of being a good oval driver; there’s a lot of mind over matter! And I’d convinced myself I didn’t want to do the IndyCar Series again.”

That August, Franchitti made the trip out to the IndyCar/ALMS double-header in Detroit to watch his younger brother, Marino, wheeling Dyson Racing’s LMP2 Porsche RS Spyder. The sight of soon-to-be-champion Scott Dixon manhandling CGR’s No. 9 car between the barriers during Friday practice planted the first seed in Franchitti’s mind that he’d perhaps been too hasty in writing IndyCar off. That seed germinated rapidly later the same day when Franchitti got into a conversation with Ganassi managing director Mike Hull.

“He said, ‘I’m here to watch Marino and just checking things out,’” Hull recalls. “He said, ‘I’m not going to try to go back and do NASCAR again.’ And I said, ‘So what do you want to do?’ And he said, ‘Well, I’d love to drive Indy cars, but all the big teams are full, aren’t they?’”

Unknown to Franchitti and everyone else outside of the “need to know” circle, Ganassi had a 2009 IndyCar problem of its own. As Hull tells it, Dan Wheldon had surprised the team a few weeks earlier with the news that he would decline an option to continue on in the No. 10 after ’08 in favor of a move to Panther Racing. Until Franchitti showed up in the Detroit paddock, there were few obvious candidates available to fill what was clearly going to be one of the best cars in the field.

There’s an apparent yellow flag here. On one hand, Ganassi had a competitive IndyCar and nobody to drive it. On the other, it had the previous season’s IndyCar champion under a NASCAR contract and looking for something to do the following season. It seems inexplicable that nobody connected the dots, but both Hull and Franchitti insist that it wasn’t as straightforward as it seems in hindsight. Hull says that at the time, he was still of the belief that Franchitti wanted to continue in NASCAR. And when Franchitti joined Ganassi’s NASCAR team, he’d walled himself off from the IndyCar operation.

“I’d made it clear when I came over that I wasn’t going to divulge anything I’d done at Andretti, because I’d made a promise to those guys that I wouldn’t,” Franchitti says. “Not to the owners, but to the engineers and mechanics that had worked so hard. So we never talked about (IndyCar).”