The SBRS legacy is what drives new-since-2017 owners Anthony and Dan DeMonte and a “new and Improved” race series launched last year.

When it was time to make the switch from karts to cars, 16-year-old Jeshua Alianell chose the route of many top pro racers, the Skip Barber Racing School and Skip Barber Race Series.

The eight-weekend, 16-race 2021 SBRS held out special appeal to ex-karter Jeshua Alianell, a teenager from The Woodlands, Texas, looking to transition into cars — and toward a future in motor racing.

“So I looked up “best racing school” and [Skip Barber] popped up,” Alianell explained. “I showed my dad and said, ‘Maybe one day we can go test out a car and go out to one of the classes?”

“And about a year later, after I did another season of [125cc X30 Senior] kart racing, the opportunity came up and now we’re here…”

“Here” was the paddock at New Jersey Motorsports Park, the 16-year-old having crammed a lot of racing miles into a short three-month span: Three-Day, then Advanced Two-Day Skip Barber schools at COTA in Austin, both in the same week, before flying out west to Sonoma Raceway and the March 5-7 SBRS season openers at Sonoma Raceway.

There he impressed with a pair of second-place finishes in his first two races in the Barber F4-spec Mygales — impressive but only a prelude to Race 1 at COTA on April 29 where the teenager qualified on pole and led every lap of a race in a downpour to claim his first win.

“I enjoyed that — I actually like driving in the rain,” he said. “What really surprised me is the go-kart is so similar to that Formula 4 car. Like, everything I’ve learned in karting, I felt like it transitioned over to the F4 car.” 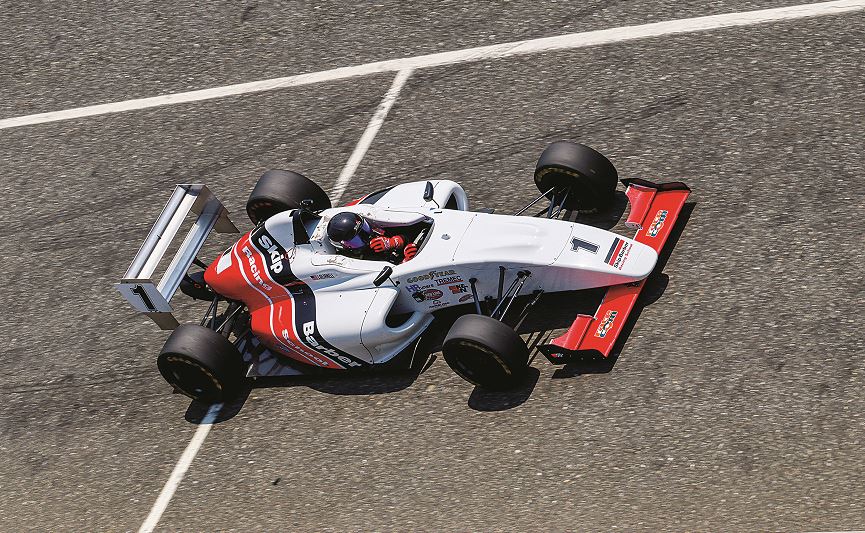 His biggest challenges, meanwhile — the power delivery and mastering trail-braking — are being chipped away at via the Barber instructor coaches.

“The same instructors travel around with us, watch us at different corners, then give us feedback. ‘What do we need to work on? What can we improve?’ And it’s the same guys. It’s a team effort. They’re very positive.”

A key attribute of the Barber Race Series is the ongoing video and data collection, reviewed with each driver after every session.

“We did some data gathering in karts,” Alianell said, “but it was not on this level. That’s been awesome.”

Of particular appeal to Jeshua’s physician father, Sam, is the presence of human performance coach Keke Lyles who, like all the coaches, is committed to pushing drivers in the series to the next level.

Also off-track, Alianell is soaking up advice from the SBRS PR and marketing team directing, working on his social media presence (find him on IG @jeshua_alianell).

Will he follow in the footsteps of the dozens of SBRS graduates who went on to greatness? Time will tell, but via the Skip Barber Race Series, he’ll be well-grounded in the fundamentals, well-prepared for what comes next.