The weather was a big part of the story on the second day of racing at the SCCA National Championship Runoffs. The rain was expected, but not until later than it came, which was in the middle of the Formula Atlantic race. With the entire field on slicks, and the rain hitting quickly, the decision was made to throw a full-course caution and checker the race early, with James French of Sheboygan, Wis., leading.

As the first race of the day, Super Touring Under didn’t have to deal with the weather. But the competitors did have to deal with Joe Moser who, in a bid to prove that a lighter, lower-horsepower car could win the class at the Runoffs, converted the Honda CRX in which he won STL last year to STU specs. He then ran away and hid from the rest of the field, leaving a pretty intense battle for the rest of the podium, claimed by two Runoffs rookies.

By the time the seventh race of nine rolled around, for F Production, the rain had tapered well off, and those on the grid had a decision to make — rain tires, slicks, or something in between. While a dry line had formed around much of the track during the Formula F race that ran previously, there were still some wet places, and every bit of the track off line was damp. Most of the frontrunners chose wets. Cliff Ira, running a new Honda del Sol and starting second, chose slicks. Mason Workman, starting fifth, chose hand-grooved slicks, akin to an “intermediate” tire.

Ira fell to fifth at the start; Workman dropped even further. But as the track dried more, and those on wets were seeking puddles to cool their tires, the track came to Ira and Workman. Ira took the lead from former champion Kevin Ruck on lap 11. Workman moved past Ruck a couple of laps later. Ruck did hang on for third. The victory was Ira’s second national championship, his previous coming in STL.

A Pro’s Rookie Experience
Chip Herr qualified second in Super Touring Under and finished in the same position in his first SCCA National Championship Runoffs. But Chip Herr is no rookie, and neither is his Audi A4.

Herr got his start in SCCA, running Spec RX-7 and Spec Miata. He won at the American Road Race of Champions, but never competed at the National level in SCCA. Instead, he went pro racing, scoring wins in World Challenge Touring Car, first in an an Audi A4 — the same one he drove today — then as a factory Mazda driver. Then he spent a decade racing touring cars in the Dominican Republic before the pandemic put an end to that.
So when he had the opportunity to buy the same Audi he drove before, he jumped at it.

“This is one of my favorite cars that I ever raced,” Herr said. “First win at Mid-Ohio in World Challenge. I knew STU was a class for World Challenge cars to go retire and play. Having a family and a wife, it was really exciting to put this together about 11 months ago. It still gives me chills getting into that car.”

This was the first year of Herr’s three-year plan; with the next two Runoffs being at VIRginia International Raceway, one of his favorite tracks, Herr wanted to have a few shots at winning the thing. But he certainly enjoyed the first one.

“I’m still having fun racing, and to finally come to the Runoffs, and it’s at Indy, this is fantastic. I was telling the SCCA people, all the street races [I did in pro racing] were great, but this is really cool. And there’s a lot of fast guys in STU, a lot of talented guys.”

Volunteers Honored
The vast majority of staff manning the Runoffs, or any other race, are volunteers. From flaggers to scrutineers to timers to stewards, most of the people making the racing happen at the Runoffs are donating their time and expenses for the love of the sport.

Each year at the Runoffs, SCCA honors the best in each specialty with the Worker of the Year awards. Pat Prevenas, of Blackhawk Valley Region, was one of those honored this year, for Flagging and Communications. In his case, he feels it’s as much for the 50 years of being a member and encouraging others as anything else that earned him the award.

“I wasn’t expecting it at all, but it kind of puts together the whole 50 years of me being involved with the Club, and also encouraging family members to be involved with the club. Both my children are SCCA members, my brother is an SCCA member. It’s obviously been a big part of our life, both at the racetrack and away from he racetrack,” he says. 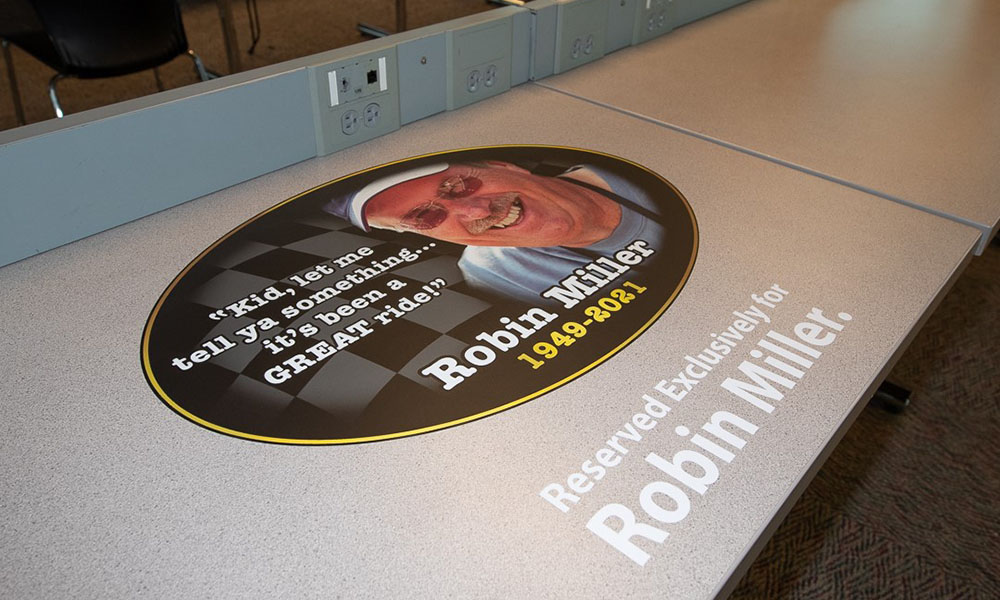 Robin Miller Tributes
Robin Miller’s ties to SCCA are distant — he got his start in racing in Formula Ford before he started racing Midgets. But the bond Miller, who lost a long battle with cancer in August, had to Runoffs host Indianapolis Motor Speedway is unbreakable. His long history covering IndyCar racing for the Indianapolis Star, then later SPEED, NBC and finally as our colleague at RACER, means he is woven into the very fabric of Indy.

On Saturday during the Runoffs, a celebration of his life was held at the Speedway, with the likes of Mario Andretti and Roger Penske singing his praises to an audience of friends and Indy legends. His regular seat in the IMS Media Center was reserved for him permanently, and there was even a remembrance on the Formula F grid before their race.