Back in 1972, Mark Donohue delivered Roger Penske the first of his 18 (and counting) Indianapolis 500 wins. Yet the New Jersey-born, Brown University engineering grad couldn’t have been more different in his background and approach from most of the guys he headed home at the Brickyard that day.

An outstanding road racer who approached his craft in an unusually cerebral way, his 1969 Indy 500 debut for fellow Brickyard neophyte Penske was his first race on any oval. But despite their collective lack of experience on one of the world’s most unforgiving race tracks, a second-row starting position and a seventh-place finish was a potent statement of intent.

Donohue’s “500” win came in his and Penske’s fourth start. By then, the combo had redefined how a driver and team could and should approach the Month of May – an approach that would earn Roger a further 17 Indy wins over the next five decades.

As our man Robin Miller noted in the June 2017 issue of RACER, 45 years after “Captain Nice’s” win at Indianapolis Motor Speedway, “When discussing the great ones at Indy, Donohue’s name is seldom mentioned.” But from the story he wrote, it’s obvious that the unassuming, yet devastatingly effective Donohue had not only earned the respect of his Indy peers, but of Robin, too.

Mark Donohue’s career at the Indianapolis Motor Speedway was much like the man: understated and somewhat underappreciated, while being overshadowed by his trendsetting car owner and the magnificent machine that took him to victory in the 1972 Indy 500.

When discussing the great ones at Indy, Donohue’s name is seldom mentioned, and that ’72 triumph is more remembered for his teammate’s domination and another team’s faux pas. But make no mistake, Donohue was a quick learner who adapted to ovals, high speeds and walls as easily as he got to grips with the aggressive USAC mentality, all while ushering in a more cerebral approach to racing at the Brickyard.

“Mark brought a different level to the sport with his technical mind, and he showed it wasn’t just brute force that could get you into Victory Lane,” says Roger Penske of the hand-picked protege who delivered “The Captain” the first of his record 16 Indy wins. “But whenever it was time to go, he did a helluva job.”

Three-time Indy 500 winner Bobby Unser, who had the field well and truly covered in 1972 in Dan Gurney’s Eagle before breaking down, likens the soft-spoken Donohue to his younger brother, Al.

“Mark wasn’t a Parnelli [Jones] or [an A.J.] Foyt,” he says. “Not much of a charger. He was more like my brother, Al, in that he was a little on the conservative side. But he got all that attention for being an engineer when the fact is, he was a damn good racecar driver.”

To appreciate what went down in 1972, it’s important to retrace the steps of the Brown University grad’s ascension that began with a hill climb in 1957 and ended tragically in Formula 1 in 1975.

Partnered with team owner Penske in 1967, Donohue captured the United States Road Racing Championship, then drove the Sunoco Chevy Camaro to the ’68 Trans-Am title while also making his Indy car debut at Mosport. When Penske brought him to Indianapolis the following year, the accomplished road racer had never competed on an oval and only tested once, at Hanford, Calif. Yet he breezed through his rookie test, qualified fourth fastest in an all-wheel-drive Lola-Offy, and finished seventh to earn Rookie of the Year honors.

“Mark felt that Indianapolis was like a four-corner road course,” recalls Penske, whose crew wore identical shirts (tucked into their pants), polished the race car’s wheels and washed the garage floor every night – all to much mockery from the USAC establishment. “He was very smooth, very calculating and adapted real well, even though it was all foreign to him.”

Bobby Unser wasn’t surprised at how well Donohue adapted to the Speedway.

“I had an all-wheel-drive Lola that year, too,” he recalls. “We tested together at Hanford and Mark really, really understood what was going on with that car. He’s the one who suggested they move the turbocharger forward and down to make the center of gravity lower. Very smart.” 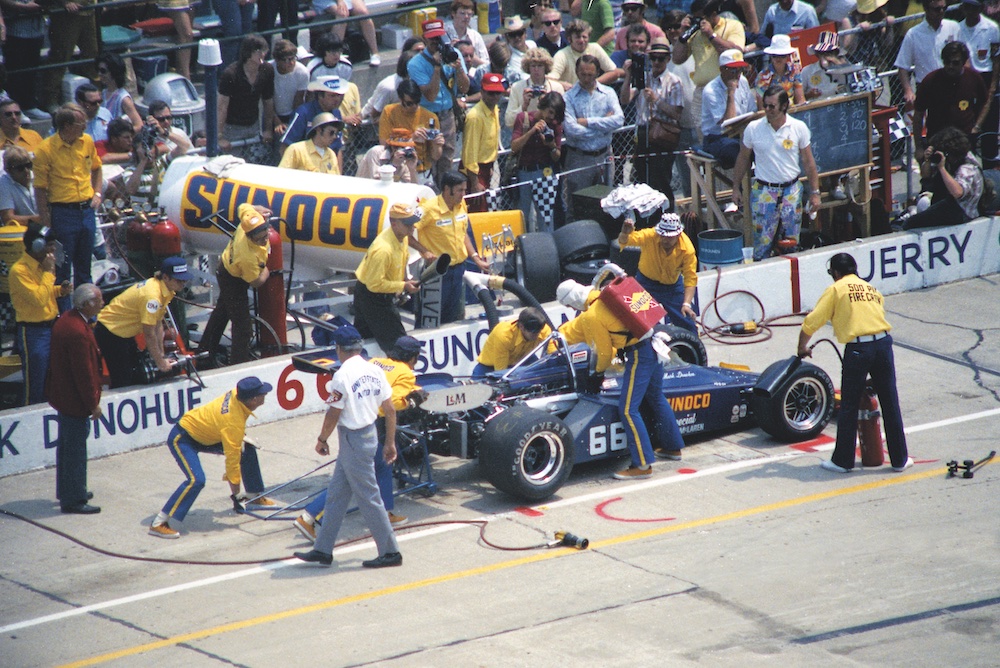 Donohue’s second oval start came in the 1970 Indianapolis 500, where he qualified fifth and ran second, behind Al Unser and ahead of Dan Gurney.

“I had an appreciation for him because I knew his background,” says Mario Andretti, whose lone Indy triumph had come in Donohue’s rookie year. “But it still impressed me, how well he took to Indy even though it was the only oval he’d ever run.”

Up to this point, Indy car racing for Penske had only been the Indy 500 and a few road races sprinkled in between Can-Am and Trans-Am, but in 1971 the team got serious. The Captain struck a deal with Teddy Mayer to buy a new factory McLaren, which didn’t really frighten any USAC regulars at the time.

“To be honest, McLaren was just another entry,” recalls Johnny Rutherford, whose life and career would change forever a couple years later with McLaren. “They were brand new and hadn’t won anything – and neither had Roger, at least in open-wheel. He’d been successful in sports cars and road racing, but it takes a while to figure out how to get around at Indianapolis.”

Still, considering how well Donohue and Penske had run in their first two attempts at IMS, it was hard to imagine why McLaren would sell a couple cars to “R.P.” when it was fielding its own two-car effort for Peter Revson and Denis Hulme.

“Bruce [McLaren] was a good friend and we had a long history together – I sold him my Xerex Special sports car,” says Penske of the well-respected F1 and sports car winner who died in a 1970 Can-Am testing accident. “I wanted to go to Indy with Revson and Mark, but Teddy was going to run Revson, so he sold me a couple cars.”

Penske didn’t unveil his newly acquired McLaren M16 until May, having Donohue run a Lola-Offy and a Lola-Ford at Phoenix and Trenton, respectively.

“We tested the M16 at Phoenix,” recalls Penske. “We took off the wings to see what it was like, then we put them back on and it was a rocket ship. Mark couldn’t believe how well it went around the corners, and we couldn’t wait to get to Indianapolis.”

First glimpse of the Gordon Coppuck-penned, Offy-powered M16, with its sleek shape and wings fore and aft, brought a collective gasp from the opposition.

“The first time I saw it I said, ‘This is it, it’s all over,’ and it was the most deflating feeling,” admits Andretti, whose McNamara-Ford looked like a garden tractor next to the svelte McLaren.

Donohue demolished Al Unser’s IMS track record of 170.221mph with a 181.2mph practice lap on May 12, a day that still makes Penske chuckle.

“We had stop watches back then, with a timing chart taped on the back that converted seconds to miles per hour, but 180mph didn’t exist on the timing chart.”