In 2016, RACER celebrated the 25th anniversary of an IMSA icon, the AAR Eagle Mk III. Ahead of IMSA’s visit this weekend to the Mk III’s birthplace in Monterey, we’ve updated the piece to reflect a few changes to the Eagle’s fabled history as it reaches the 30-year marker since the car turned the series on its head on home soil.

All American Racers’ Eagle Mk III chassis made its debut at Laguna Seca’s IMSA GTP round in 1991, and with IMSA’s WeatherTech SportsCar Championship ready to race at the same track, it’s worth taking a moment to celebrate the 30th anniversary of the fastest, most dominant prototype this country has ever produced.

“Wow, you’re not the only one that forgot it!” the late Dan Gurney said in 2016 of the Monterey milestone. “25 years ago? I don’t feel younger when I hear that news, but I don’t feel old.”

The Mk III’s first presence in the Monterey paddock drew the attention of most fans – and plenty of teams – before the opening practice session got underway. The 2.1-liter, turbocharged four-cylinder engine carried in the back of the Mk III was familiar; AAR had been using it in GTO Toyota Celicas and in its earlier GTPs, but the motor wasn’t the primary point of attraction.

Those in attendance – including this writer – marveled at its next-level aerodynamics; the sheer size and volume of the No. 99 Mk III’s high-waisted bodywork, plus the through-flow air channels running from the nose through the sidepods to the back, were unlike anything we’d seen in GTP.

“We got a ton of criticism about what we had done by the experts, which was kind of like the establishment in those days,” Gurney said. “You had to do things the way they thought it ought to be done. Or so they thought.”

“They said our air inlets on the front were too big. Just generally, they were negative about it. Most of the ‘experts’ didn’t realize what we were doing aerodynamically, and still don’t. If they had realized and saw what happened even in that first race, it was the beginning of the end for the rest of those guys.”

This Eagle looked like it was from the future, and once Juan Manuel Fangio II hit the 2.2-mile track with the Mk III, its performance confirmed our suspicions: Every other GTP car was made redundant in an instant.

Short on testing mileage, Fangio and AAR used the Laguna Seca event as more of a test held within a race. Despite the lack of knowledge on what the Mk III wanted for mechanical and aero setups, the Argentinian was able to qualify second behind Wayne Taylor in the one-lap-special Chevy Intrepid. With its track-pulverizing downforce and instant torque, the South African claimed an impressive pole with a lap of 1m14.928s.

IMSA GTP landscape changed the instant the Eagle Mk III was unloaded for the first time at Laguna Seca in 1991. Image by Marshall Pruett

Fangio wasn’t far behind with a lap of 1m15.223s to earn a front-row starting spot next to the Intrepid, but once the green flag waved, Taylor was a sitting duck.

The Mk III came close to winning the first time out at Laguna Seca as Fangio built a staggering lead of more than 50 seconds by the close of the contest, but those chances were derailed by a pit lane violation during a splash-and-go that resulted in a one-lap stop-and-hold. Another violation leaving the pits – after serving the first penalty – led IMSA to tack another 35 seconds onto the No. 99 after the checkered flag. Fangio was credited with an unrepresentative seventh.

Fangio did manage to lead 54 of the 84 laps and set the fastest lap during his fiery charge after the first penalty – a 1m15.741s – as Davy Jones went on to win in the TWR Jaguar XJR-16. To fully grasp the raw nature of the Eagle Mk III on its 1991 premiere, AAR returned for the Laguna Seca GTP race in 1992 with a full season of development under its belt and shattered the track record with a pole lap of 1m11.294s set by PJ Jones. That’s damn near four seconds faster – 3.929s to be precise – from where the MK III started in 1991.

And to appreciate the Mk III’s frightening speed, the pole for IMSA’s visit to Monterey in 2015, set by Wayne Taylor’s son Jordan in the No. 10 WTR Corvette DP, was a 1m18.718s. Jones’ 1992 pole, a full 7.424s below 2015’s DP benchmark, says more about the changes in prototype technology and relative tire quality than the caliber of driving talent.

IMSA’s modern track record at Laguna Seca, a 1m15.035s lap set by Jordan’s older brother Ricky Taylor in 2019 with an Acura ARX-05 DPi on Michelin rubber, effectively halved the difference, cutting it to a deficit of 3.741s.

On the Mk III’s return to Monterey in 1992, it had Europe’s most fearsome prototype to contend with as TWR brought the all-conquering Jaguar XJR-14, with its Cosworth/Formula 1 engine and revolutionary aerodynamics, to attack the Eagle.

The XJR-14 vs Mk III battle wasn’t even close: AAR’s machine pounced on TWR’s best car without mercy, capturing nine wins from 15 races and the GTP title with ease. Jaguar, along with every other factory program, ran and hid after 1992. AAR returned for 1993 with the same two-car team and swept GTP while setting 10 lap records at 11 tracks on the calendar.

“The Jaguar was a terrific car,” Gurney said, “but it wasn’t quite terrific enough. But it was one whale of a good car.  And it had exceeded the Formula 1 lap time at Silverstone, we were told.  So no doubt it was very good.  And the TWR people were a great group.  One of the things about the Jag was that it seemed to like really smooth racetracks like a Formula 1 car does. And our car liked those, but it wasn’t bothered by the rough ones.  That really made a difference. We had a bigger sweet spot in terms of ride height and angle of attack, and all that stuff. That was really special. What we ended up realizing is our car was even better than we thought it was.” 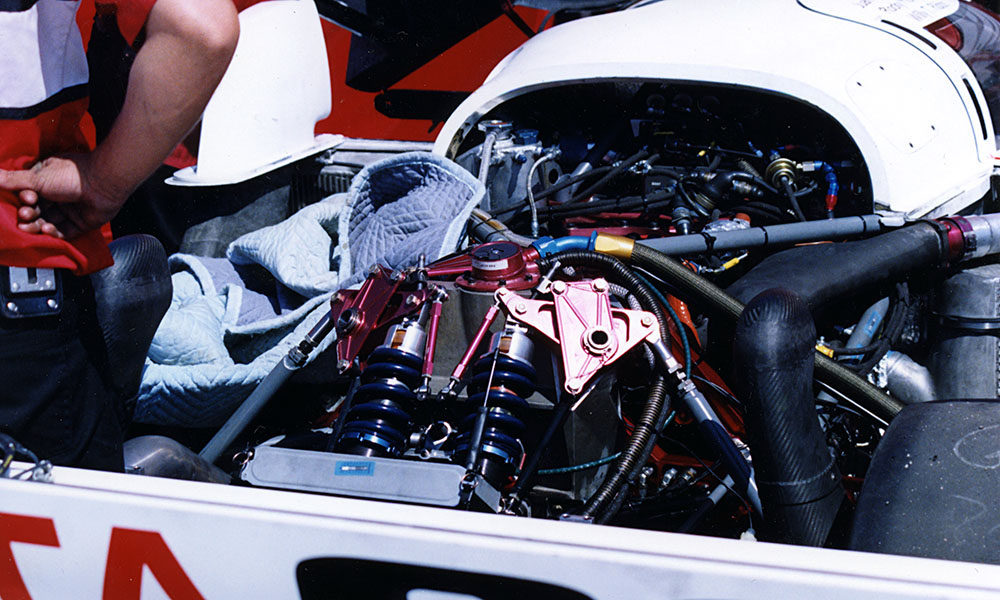 Along with the innovative aero, the Mk III’s suspension started a new chapter in prototypes with tight packaging front and rear that was more commonly found on open-wheelers. Image by Marshall Pruett

The Mk III’s aero played the greatest role in the car’s GTP dominance, but as Gurney explains, Drino Miller’s ferocious little Toyota engine wasn’t just along for the ride.

“Drino did a lot of our development work,” he said. “I was told that he blew up three dynamometers working on that thing!”

From cleaning out the GTP class by the end of 1992 to rewriting IMSA’s history books and closing the GTP era at the end of 1993, the Eagle Mk III turned American sports car racing upside down with a simple and unassuming debut more than a quarter-century ago in Monterey. And despite the car’s age, Gurney didn’t shy from sending a reminder about the Eagle’s long-standing presence in today’s IMSA series.

“I must say that with PJ driving, the Mk III still holds the lap record at the Daytona 24 Hour circuit,” he said of the WeatherTech Championship’s season-opening event.  “We set that in 1993.”

With the loss of Gurney in 2018, he missed the passing of the Daytona lap-record torch to Mazda as Oliver Jarvis finally improved upon the Mk III’s standard of 1m33.875s. It took 26 years to achieve, but the Englishman was finally able to beat the old Eagle with a new lap record of 1m33.685s.

All those years, and all the sweeping advancements in technology, to inch ahead of the Mk III by a mere 0.190s. IMSA at Monterey in 1991 was the start of something that was truly special.