Talk about a shot across the bow of IndyCar’s most successful team to start the new season. I love moments like last week where a big and aggressive move — the confirmation of Gavin Ward’s hiring at Arrow McLaren SP — sends a signal to the entire paddock that a team on the cusp of something big isn’t messing around.

Most of the exciting silly season news revolves around drivers moving from one team to another, but on rare occasion, it’s a personnel change with the signing or a loss of a key crew member that makes waves. That’s precisely what we have with Ward’s decision to leave Josef Newgarden’s Penske timing stand for a career upgrade at AMSP.

There’s considerable power and potential within AMSP’s expanded engineering group, and in Ward, the team has acquired someone with a ton of experience in Formula 1 from his years at Red Bull, not to mention championship-winning IndyCar pedigree from the title he won with Newgarden in 2019. Moreover, AMSP has also brought a person in who is at the point in his career where he’s ready to move on from race engineering and apply his knowledge in a greater capacity — to an entire team — like a technical director.

The timing is also perfect for AMSP’s Craig Hampson who, after working as the team’s TD since arriving in 2020, is said to have been longing for a return to the timing stand. Combined, AMSP has two of the best engineers in IndyCar, with one wanting to look after big-picture performance, and the other longing for the challenge of getting AMSP’s second car into the win column. Together, they’ve been given what they want, and that’s where this play by AMSP could become a nightmare for its rivals.

With Hampson in charge of his No. 7 Chevy, Felix Rosenqvist’s odds of returning to victory lane have received a massive lift. In fact, I believe every driver Hampson has worked with for a full season, maybe barring one, has won an IndyCar race. And with Will Anderson continuing as Pato O’Ward’s race-winning engineer on the No. 5 Chevy, the Taylor Kiel-led operation is looking like a genuine title contender.

AMSP went quite far last year in that regard with O’Ward, but it was effectively a one-car team taking on the best multi-car campaigns that Chip Ganassi Racing, Andretti Autosport and Team Penske had to offer, and the size of the challenge became untenable as the No. 5 effort faltered a bit in the home stretch. With O’Ward ready to resume the fight, a rejuvenated effort for Rosenqvist and all of the anticipated contributions from Hampson and Ward in their new positions, plus the return of Juan Pablo Montoya for the month of May, AMSP fans have every reason to feel bullish about the rise of the entire organization in season ahead.

Looking back across decades of Team Penske-related news with its drivers and major personnel, you’ll find the vast majority of the stories involve the most successful team in IndyCar history doing the hiring of rising or established stars. On rare occasion, like we have with Ward, the tale is altogether different with one of the series’ most valuable assets heading out the door to try and help a less accomplished team overtake his former employer. Strange times.

As I mentioned in the Penske engineering update earlier in the week, the team isn’t ready to announce its driver and race engineer pairings, but I can say that Eric Leichtle comes to the program accompanied by nothing but positive endorsements of his skills and efforts with Pratt & Miller Engineering as its IndyCar project manager.

There’ll be a new face alongside Newgarden’s on the No.2 pit stand this year. Phillip Abbott/Motorsport Images

The loss of Ward and hiring of Leichtle is a fascinating subject with regard to Penske’s immediate future. If Leichtle is installed with Newgarden, the two-time champion will head to the season opener at St. Petersburg with a new race engineer who will engineer an IndyCar for the first time at a motor race.

Fortunately for Team Penske, there’s a recent history of doing so with the No. 2 Chevy, so the onboarding process for new IndyCar engineers is well defined. Not so long ago, Penske took Brian Campe, a veteran engineer within its NASCAR program, and moved him over to IndyCar with Montoya. Campe was able to spend time learning from the senior engineers on the open-wheel side before being thrust into the role, and if we consider the 2015 Indy 500 win and championship tie with Scott Dixon (who took the title thanks to having more wins) he facilitated with JPM, it’s entirely possible for Leichtle, who spent last season helping with strategy on Simon Pagenaud’s car, to find similar success.

Ward also spent a considerable amount of time shadowing the Penske engineers before he went live with Newgarden, but the question here is whether Leichtle will have enough time to do so before we go racing on February 27 in St. Pete. There’s also been a suggestion he might work with Will Power and Power’s longstanding race engineer David Faustino could slide over to Newgarden’s No. 2 entry.

Which Penske driver is most likely to wage the strongest championship bid, which driver has the longest runway ahead with the team, and what would be the smartest driver/engineer pairing to achieve its short- and long-term goals? I don’t envy the people who are tasked with providing those answers.

The only change I can say is a done deal involves Ben Bretzman being attached to Penske sophomore Scott McLaughlin. I absolutely love this move. McLaughlin had a good rookie season with race engineer Jonathan Diuguid leading the way, but with Diuguid’s promotion to lead Penske’s new Porsche IMSA/WEC program, I was concerned about the New Zealander’s future. There were some highlights produced in 2021, more often than not on the ovals, but few standout performances elsewhere on the calendar. To go from a good season to delivering what Penske expects from its drivers, consistency and stability to build upon is what McLaughlin needed most entering his second season.

Losing Diuguid certainly didn’t help, but with Simon Pagenaud moving on from the team, Bretzman’s newfound availability should be a blessing for the Kiwi. Bretzman’s more than a numbers guy; he goes about his race engineering job as a coach, mentor, friend, and security blanket. For what McLaughlin needs to make the leap from running just outside the top 10 at most races to making regular appearances inside the top 10, he couldn’t ask for a better person than Bretzman to continue what Diuguid started.

So, whatever it is that Penske ends up doing with the other two driver and race engineer assignments, we know that meaningful change, learning, and adaptation will be involved, and that’s not something I’m accustomed to seeing to this degree with the program. Most years, there’s a feeling of Penske being a juggernaut, rolling from one season to the next with all questions answered. The early months of the 2022 championship will tell us whether it will continue.

From a forward-looking perspective, a footnote in our story about RLL’s engineering changes triggered a flurry of texts regarding former technical director Tom German’s move to a factory role at Toyota Racing Development. Most of those texts went something like, “I guess that answers whether Toyota is giving IndyCar a serious look.”

Considering German’s vast experience at Team Penske, Andretti Autosport, and RLL, and his undeniable success with Indy 500 and championship wins, it would indeed be silly to think TRD acquired German and then limited his scope to boosting its NASCAR and short track programs.

Go beyond the engineering moves, and there’s been plenty of action taking place in the background. As we wrote in RACER’s last silly season update regarding the last significant seat to fill on the grid with Ed Carpenter Racing’s No. 20 Chevy, “England’s Jack Aitken recently tested with team, following Ryan Hunter-Reay’s test, and if either has the sponsorship to deliver to ECR, I’d assume a deal would have been announced. It makes me wonder if Conor Daly might just end up staying in the car with a new group of backers in tow.” 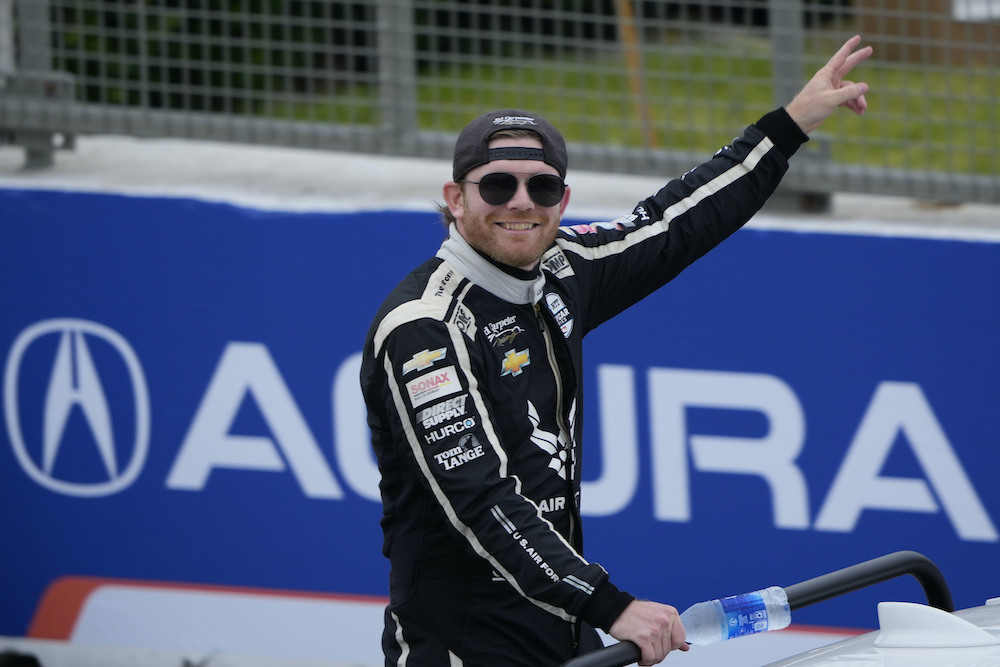 Is Daly back at the head of the queue for ECR’s No. 20? Richard Dole/Motorsport Images

I texted with Jack last week, who said he wasn’t able to raise the funds and is out of the picture at ECR, but hopes to find another entry point to IndyCar with ECR or another team in the future. Daly mentioned having something in the works last week on his podcast, and I continue to hear his name spoken of as a strong candidate to return to the No. 20 Chevy. That car remains as the last entry to confirm its full-time roster, and if it isn’t Daly and a new sponsorship package to bring and secure the road and street courses (plus the Indy 500), I’m not sure where ECR will find a driver with millions in hand to step in and claim the seat on short notice.

To my knowledge, RHR doesn’t have millions to offer — if he did, he would have been announced as Carpenter’s teammate — so if it isn’t him, Daly or Aitken, ECR will be under pressure to find someone else, as we’re now just 45 days out from the green flag at St. Pete.

Cusick Motorsports continues to find itself in the strange scenario of having a significant budget to offer and being unable to find an IndyCar team to field an entry for Stefan Wilson at the Indy 500 and a handful of other rounds. Would Cusick/Wilson be a good fit for ECR’s vacancy?

Sad to learn the Juncos Hollinger Racing team has cancelled its plans to compete in the Indy Lights series this year. JHR ran Sting Ray Robb and Toby Sowery/Rasmus Lindh last season, appeared to have one car filled and had inquiries coming in for the second, but Juncos tells me it will focus solely on IndyCar this season and look to return to Indy Lights in 2023.

Lots of questions continue to come in about Carlin Racing and whether it will be on the IndyCar grid as an independent team or in some form of collaboration with JHR. I should be able to provide an answer in the next week or so; it’s not that I don’t know the answer, but rather, the timing of that answer being best kept for later in the month.

Penultimate note before we go is on the hard return of COVID-19 with the Omicron variant and how it’s sweeping through teams like it was 2020. From crews on the shop floor to two IndyCar team leaders that I know of, there’s been a constant influx of folks mentioning they’ve been hit with the virus. It’s too early to tell whether the upcoming season will be impacted by it in any way, but after speaking to a number of folks who own or run some of our favorite racing series over the last week, it’s a significant concern.

Finally, I received a text from former Force Indy USF2000 driver Myles Rowe who thanked all the kind folks who’ve donated to his GoFundMe account. Myles said that while they’ve only gotten to the halfway point of completing his budgetary needs to keep going in USF2000, it looks like he’ll be able to start his sophomore season on the Road to Indy while continuing to search for the necessary sponsorship to complete the year.