The NTT IndyCar Series has ventured into an interesting territory with its handling of Andretti Autosport’s post-race penalty following Alexander Rossi’s win last Saturday with the No. 27 Honda.

In its end-of-day Wednesday press release, the series announced the car failed to comply with two items, starting with Rule 14.4.1.1. The minimum weight shall include the car in ready-to-compete condition excluding Driver, Driver Equivalency Weight, fuel and drink bottle content; and ending with Rule 14.4.1.1.1. Minimum weight for Road/Street Events – will be 1700 pounds.

What does all of that mean? For the first rule, it makes it plain for IndyCar teams that all of the aforementioned items must be removed from the car when it’s presented for post-race technical inspection.

All of the E85 ethanol is pumped out of the fuel tank. The driver equivalency ballast — which could be a large or small amount of weight bolted onto the car to try ensure a small driver and a large driver compete with vehicles that tip the scales at or near an identical number during the race — must be uninstalled. And the drink bottle, which sits tucked away in a panel next to the driver’s knees in the cockpit, is the last item listed to extract by the team in the post-race tech process. We’ll come back to that last bit in a moment because there’s a scenario where it isn’t taken off the car.

The purpose for all of the removals is to strip away the major variables that would manipulate the minimum weight of a Dallara DW12 chassis after the car has completed a race. Minus fuel and ballast and drinking material, every IndyCar is at its baseline weight and ready for inspection.

The next rule cited in the violation involves the minimum weight each IndyCar is expected to meet, and at the Indianapolis Grand Prix road course round, it was 1700 pounds.

After reading IndyCar’s original explanation of the matter and wondering why the Andretti team and Rossi received a fine and losses of points instead of an automatic disqualification for the back-and-white topic of being underweight, I asked for further clarification from the series on the car falling below 1700 pounds as measured on the tech pad, and how the penalties were chosen.

“Based on pre-race and post-race technical inspection, the No. 27 was compliant and met or exceeded 1700 pounds during the race,” the series told RACER. “It was once the car was weighed without elements of Rule 14.4.1.1., in post-race inspection, when the car was found to be non-compliant. The process the team used to achieve the minimum weight is not permitted.

“Since the drink bottle was used to achieve minimum weight, IndyCar imposed a monetary fine and points deduction in line with the severity of the infraction according to IndyCar’s Technical Penalty Guidelines.”

It’s here where the deeper answers to the inspection process reveal the issue at hand. Everything listed by IndyCar about the drink bottle is accurate, but the real problem started with the No. 27 having an insufficient amount of ballast installed before the race.

Every team adds extra ballast to their cars before the race as a precaution to avoid falling under 1700 pounds in post-race tech. This extra ballast is unrelated to the driver equalization ballast and is not required to be removed for tech; it stays on the car from the start of the race until after the car clears post-race inspection.

On average across all teams, somewhere in the range of five to seven pounds of extra weight is installed to ensure the car comes in safely over that 1700-pound mark. Some teams like to cut the margin closer and go for 1703-1704, and some come in at 1710 or more. But as a whole, it’s completely normal for IndyCar’s tech team to see 1704, 1705, 1706, or 1707 flash across their screens when the car is on the scales.

Alex Palou’s car rolls out of tech at IMS during the Indy 500. Teams routinely adjust ballast to account for variables such as in-car cameras and drink bottles with the aim of coming in just over the 1700 pound minimum – but miscalculations can happen. Image via Penske Entertainment

The weight of the drink bottle is also a factor in the post-race tech routine. On average, drink bottles weigh two to three pounds when full, and for thirstier drivers, bigger bottles that carry more might be used. For the sake of consistency, we’ll use three pounds as the standard for the rest of the article.

If a car is weighed and comes in at or over 1705 pounds, the inspectors might not ask for the drink bottle to be removed because at three pounds, the offset would be at least 1702, easily above and fully compliant with the minimum weight rule of 1700.

But if the car is slightly under 1705, I’ve heard the practice is to immediately demand for the drink bottle to be removed — if it wasn’t already taken out – and for the car to be weighed without it. This is what happened with the No. 27 entry. We don’t know what low number it hit, but it had to be in the sub-1705 range to catch the attention of the technical inspectors, and the bottle was still in the car.

I’m also told that after IndyCar instructs a crew member to remove the bottle, the car is not only re-weighed, but it’s common to place the bottle back on the car and document the weight again, followed by removing the bottle and confirming the weight without it, etc. The dance of weighing the car with and without the bottle is usually done a couple of times for the sake of accuracy and repeatability.

In the case of the No. 27, the team is believed to have missed the target with its extra ballast, and without that safety margin in place to keep the car above the 1700-pound minimum, it didn’t race comfortably above the number it needed to be deemed legal after the race.

Although it’s highly uncommon for a series to open a penalty press release by saying the car was at legal weight in the race it won, the note is accurate. Where some of Rossi’s rivals have taken umbrage is that the penalty listed by IndyCar — using the water bottle to meet minimum weight — doesn’t tell the full story.

The rest of the drivers had the same three-pound water bottles in their cars, plus the extra ballast installed to ensure their cars were at that approximate stripped-down weight of 1704-1707. If you add in the water bottle weights to the other cars on top of their safety ballast, you have the rest of the field at 1707-1710 pounds.

So, we don’t know what the exact gap between the No. 27’s no-bottle minimum weight happened to be, but it was likely in that 1697-1699 range, and with most of the other cars at no-bottle weights in the area of 1704-1707, some of Andretti’s competitors figure Rossi spent the afternoon racing with a five- to 10-pound advantage.

There’s an old number used in racing that says 10 pounds of weight is worth 1/10th of a second in lap time. It’s far from a scientific estimate, but it drives home the general point that even a modest decrease in weight will result in improved lap times and better tire life. 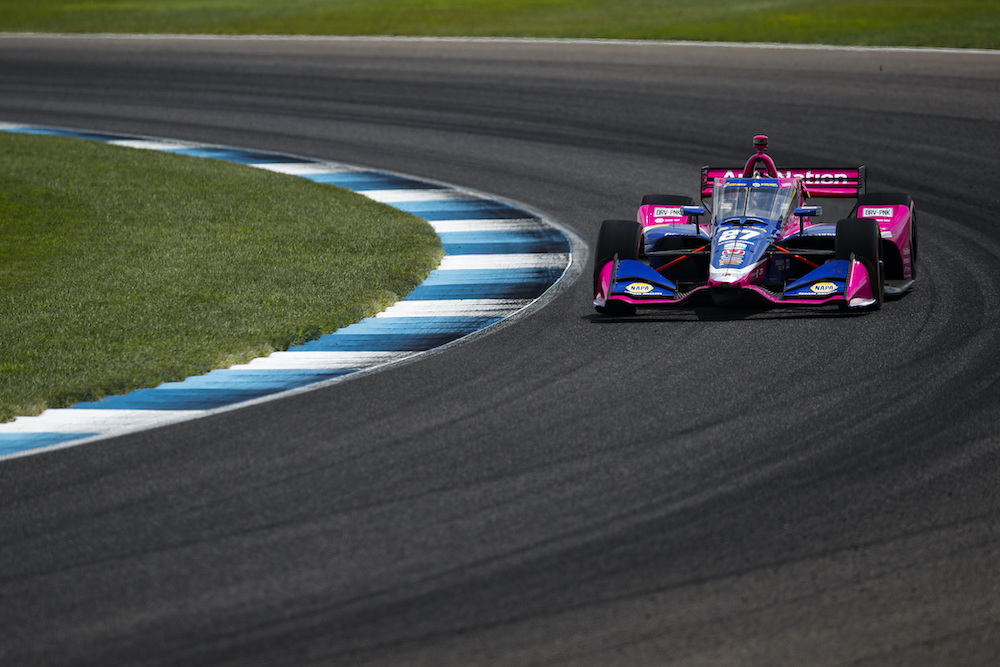 Rossi’s car was technically at a legal weight throughout the race, but if it was running insufficient ballast, it was gaining some degree of illegitimate performance advantage. Jake Galstad/Motorsport Images

Although unconfirmed, I’ve heard the No. 27’s race-weight advantage wasn’t that high, closer to four to six pounds below the others. Whatever it was, the key takeaway is IndyCar deemed Rossi and the Andretti team to have spent 85 laps on Saturday at a weight that was legal, but with the car converted to post-race tech specification, it was not.

What happens in tech tends to be the only determination most racing series use to arrive at its penalties, but here, IndyCar pulled in what it felt were mitigating factors from the race to steer away from a DQ.

Although rare, it’s not entirely unheard of for a team to lose track of its ballast target. I’m guessing this was taken into consideration as well. If a team goes to lighter coilover springs, a small amount of ballast would be added to compensate. If NBC decides to install an in-car camera, ballast equal to the camera system’s weight would be removed. If cooling shutters are added or removed from the bodywork or radiators, another ballast adjustment would be made going up or down in weight to stay in line with the safety number each team chooses for its cars.

As a few IndyCar mechanic friends reminded me this week, it’s not impossible to fumble one’s math or to get lost on the safety ballast figure and either race without enough weight installed, as happened with the No. 27, or to go the opposite direction and add too much, which leads to getting barked at by the race engineer for carrying unnecessary weight and hurting the car’s peak performance capabilities.

Nonetheless, I don’t believe for a moment that the Andretti team did anything other than make a simple error on its ballast number. Did it affect the car’s performance? Of course; a one-pound advantage is still an advantage, and at an estimate four to six pounds, you could argue that Rossi might have had a half-tenth gain per lap. But with all the times he’s ran off and hid from the competition with outrageous winning margins in cars that flew through post-race tech with no issues, I just don’t see this as the difference-makers between winning and losing.

If there’s a concern in the handling of the penalty, it’s the precedent set by the series that says there’s no reason to fear disqualification if a car comes in underweight after the race. The $25,000 fine is not a concern for the Andretti team or Rossi, and since the No. 27 is not in a realistic hunt for the championship, losing 20 Drivers’ points has done nothing to change his season. Andretti also lost 20 Entrants’ points, but it’s in no jeopardy of losing anything from the series’ ruling.

So will an entry with deep pockets and no hope in the championship decide to push the minimum weight boundaries with IndyCar and have a $25,000 check ready to hand over if it helps their driver to eke out a small performance advantage?

I’d hope not, but as with most penalties, the path that isn’t chosen can send a powerful message to those who are looking for loopholes. I can see why IndyCar labored for a few days to decide on the right course of action, and can say that I understand how it arrived at the penalties.

But I don’t like my post-race technical penalities to involve grey areas. This doesn’t feel like the right message was sent to the rest of the paddock.