Verstappen’s left-rear tire punctured at 195mph halfway down the start-finish straight while cruising with a four-second advantage over Perez and title rival Lewis Hamilton. It was the second tire failure of the afternoon, with Lance Stroll suffering a near identical crash at speed on the same hard compound after 31 laps. Verstappen’s tires were 33 laps old.

Verstappen had no warning of dangerous tire blowout

Pirelli will analyze the remains of the stricken tires before ascribing a cause for the failures.

Red Bull Racing sporting director Jonathan Wheatley radioed race control that the team had no warning of Verstappen’s failure from telemetry, and race director Michael Masi subsequently red-flagged the grand prix to allow the field to fit fresh tires and race safely to the finish.

The race resumed with a standing restart, and accounting for laps behind the safety car before the suspension and on the way to the restart grid, the grand prix ended with a two-lap sprint.

Perez started from pole alongside Hamilton, whom he had jumped at the first stops after rising from sixth to fourth on the first lap.

Hamilton got the better getaway on the new grid, but the Briton had unwittingly left enabled a formation lap brakes setting that meant he was unable to slow for the first corner.

He not only surrendered a podium place but tumbled down to 15th and failed to score — a slice of luck for Verstappen, who maintains his four-point lead in the championship.

All this cleared the way for Perez to claim a first victory in Red Bull overalls, albeit he was forced to park the car in pit exit immediately after crossing the line with a hydraulic problem.

“First of all, I have to say I’m very sorry for Max, because he did a tremendous race an deserved the win,” he said. “But in the end it’s a fantastic day for us. We were close to retiring the car, but luckily we managed to finish the race.

“I’m so, so happy for today … this is definitely a strong boost of confidence for myself and for the team.” 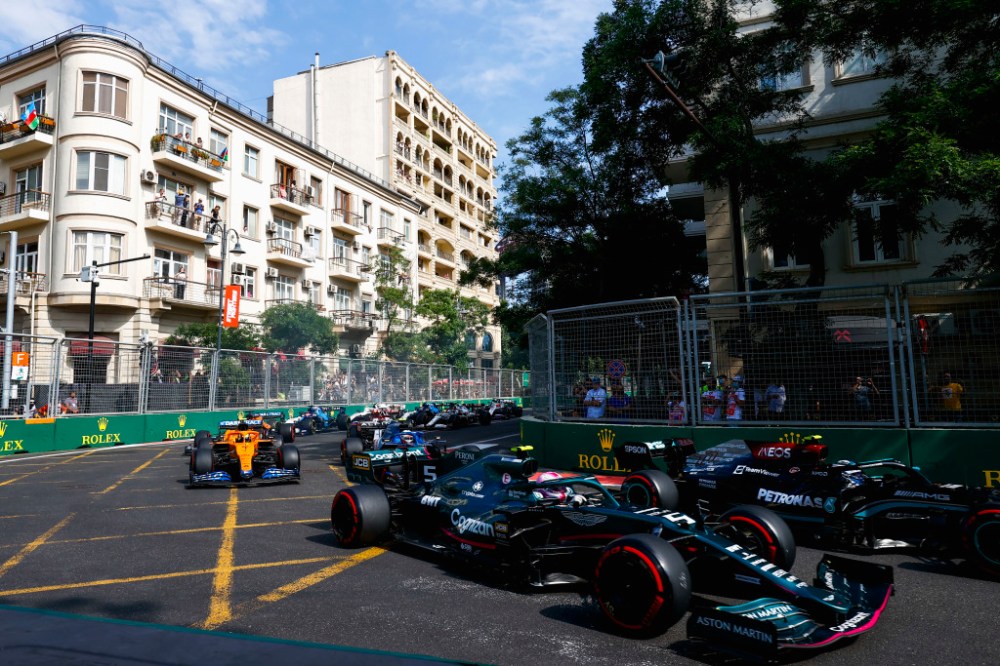 A spectacular surge through the field netted an improbable second place for Sebastian Vettel and Aston Martin. Andy Hone/Motorsport Images

Sebastian Vettel scored Aston Martin’s first podium with a strong drive from 11th on the grid to second. The German rose to net sixth after his first stop and snatched places from Charles Leclerc and Pierre Gasly at the safety car restart after teammate Stroll’s crash. He lined up third on the new grid and inherited second from Hamilton to score his best result since the 2019 Mexican Grand Prix.

“A great day — I’m over the moon,” Vettel said. “I think it means a great deal. It’s been a tough start.

“It was a great race. We had great pace, that was the key.”

Gasly lined up fourth on the new grid after sitting behind the front-runners all race. He battled tightly at the restart with Carlos Sainz and Lando Norris, who restarted fifth and sixth, and lost a place on the penultimate lap to Leclerc; but he snatched back the position to score his second career podium on the final tour.

“Incredible,” he said. “Honestly I don’t really know what to say. It was such an insane race, a super-intense last two laps.

“The car’s been incredible all weekend … I didn’t know if we could keep that position and fight for even a podium, but in the end we did it.”

Pole-getter Leclerc and McLaren’s Norris finished fourth and fifth, a decent result for Norris in particular after dropping to 12th on the first lap and making slow progress back up the field until the Stroll safety car restart.

Fernando Alonso finished a shock sixth after spending most of the race battling outside the points. The Spaniard took the restart 10th but a sizzling penultimate lap saw him gain four laps to defend sixth on the final tour and record the best finish of his comeback to date.

Yuki Tsunoda navigated the chaos of the race and standing restart to finish seventh, where he started, in a strong recovery from his Q3 crash on Saturday.

Carlos Sainz finished eighth, small consolation for the Spaniard, who dropped from fifth to 15th at his pit stop after running of the track in the castle section of the track on cold tires.

Daniel Ricciardo scored two points for McLaren in ninth in a quiet afternoon for the Australian, and Kimi Raikkonen finished 10th for Alfa Romeo.

Antonio Giovinazzi finished 11th ahead of an off-form Valtteri Bottas. The Finn started 10th but made no progress in the race despite some stern encouragement from his engineer.

Bottas stopped for new soft tires during the Stroll safety car in an attempt to find pace in the machine, but it worked only to drop him further down the order and resulted in Mercedes’s first non-points race since the 2018 Austrian Grand Prix. 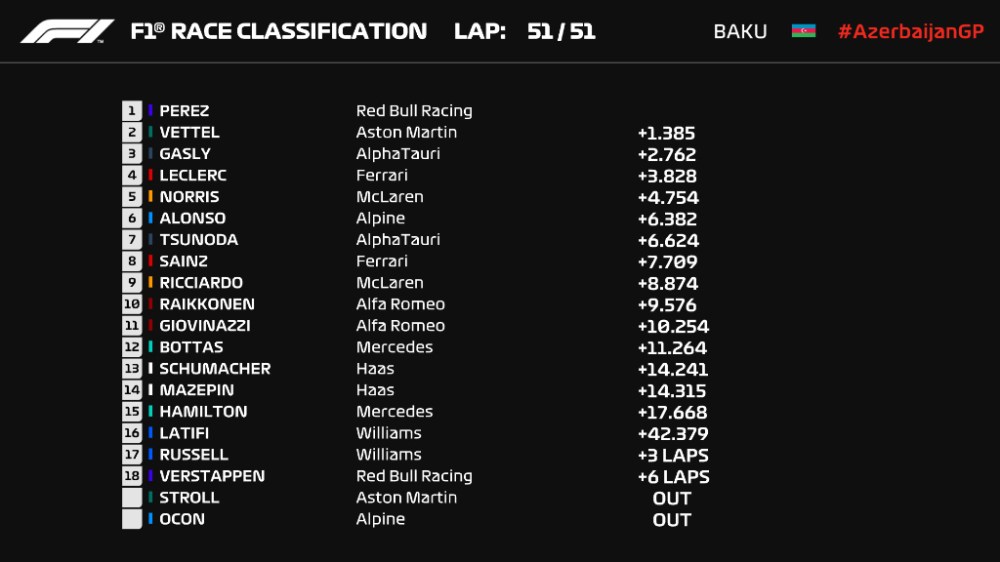 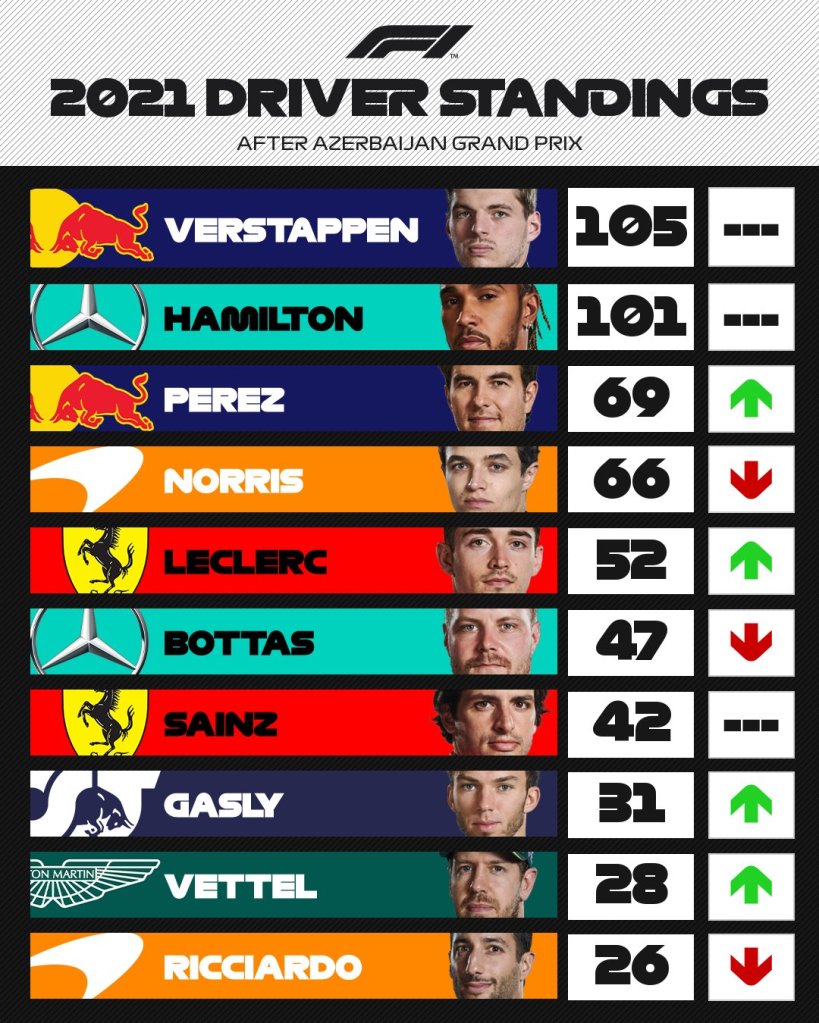