Home / Racing / OPINION: Spa was mess of the sport’s own making

Lewis Hamilton called the Belgian Grand Prix “a farce”, and he was right. But not because there was no racing.

Formula 1 and the FIA were put in an impossible situation. The weather conditions simply were not good enough to try and hold a race. Every observer could see from the spray even behind the Safety Car that visibility was terrible; at full racing speed it would have been far worse.

The rain on Sunday was far from torrential (for the most part, anyway) but it was so consistent that there was just water everywhere. The geography and topography of Spa meant rain clouds were forming directly above the circuit, and then the water they deposited was pooling up across various parts of the track.

It was only two years ago that Anthoine Hubert lost his life at Spa-Francorchamps because of a crash triggered by an incident at the top of Raidillon that those approaching couldn’t see. When there’s no visibility of an accident ahead, the chances of it being severe or even fatal grow exponentially.

This wasn’t the drivers being wimps. It was absolutely the right decision to not let them loose. If they were ever told to go for it, that’s what they would have done. They’re competitive beasts who sometimes need saving from themselves – just look at Lando Norris in qualifying. But that doesn’t mean they’re happy about it.

In the true Robin Miller style of recalling a race from the past, I remember sitting in the press room at Suzuka in 2014 waiting for a typhoon to hit, but F1 not starting the race any earlier for a number of commercial reasons. It was ridiculous, and felt it at the time, but once the lights went out, the drivers still went for it, and it ended tragically.

Some lessons appear to have been learned from a safety point of view at least, but the praise the sport should have gotten for making a tough decision even though it wouldn’t be popular was completely undone by the way the regulations led to the final result.

Yesterday was not a race. There were no racing laps. The first running was made up of a few formation laps, and the latter two were attempts to check the conditions. Nobody was racing, so it wasn’t a race.

The regulation that more than two laps need to be completed was not written with this scenario in mind. It clearly addresses a time when an incident causes a stoppage, or the weather deteriorates to a point that it is unsafe, and the race can’t restart. In such cases though, the regulations seem to assume the first few laps will have been racing ones.

F1 showed signs of having learned some lessons from the tragic 2014 Japanese GP. Steven Tee/Motorsport Images

But it should have been obvious what the potential outcome would be when the race “resumed” (somehow, having never actually started) yesterday. The Safety Car led the field out, the clock started ticking and it counted as the first race lap. Once more than two were ticked off, any final stoppage was going to give an official, but ridiculous, result.

It’s a problem created by the rule makers that race direction walked headfirst into, and in some ways I have sympathy for Michael Masi, and in others I don’t.

Clearly everyone wanted to get some form of race in. The stewards used a clause in the International Sporting Code to stop the race clock and expand the window to try and run in, giving every chance for a break in the weather.

And there was a break in the weather, but it was so slight, and so short, that by the time the teams had responded to the 10-minute warning and got out on track, it was raining more heavily again.

But like the fans, those teams hadn’t been sitting around waiting for no reason. They wanted to go racing. They wanted to earn more points, or at least stop rivals scoring as many. And Masi saw what was probably the last chance to get a race started and took it, only for that to still prove unsafe and be called off.

At best, it was an error in judgement, because it created a scenario where an afternoon featuring no running at speed would count as a race that handed out half points. But the FIA should have seen it coming. At worst, it was a box-ticking exercise to generate a result that contractually meant a race took place, and it’s so hard to shake the feeling of the latter.

“The only people to lose out are the fans who have paid good money to watch us race,” Hamilton wrote after the event. “Of course you can’t do anything about the weather, but we have sophisticated equipment to tell us what’s going on and it was clear the weather wasn’t going to let up.

“We were sent out for one reason, and one reason only. Two laps behind a Safety Car where there is no possibility to gain or lose a place or provide entertainment to fans isn’t racing. We should have just called it quits, not risked the drivers and most importantly refunded the fans who are the heart of our sport.” 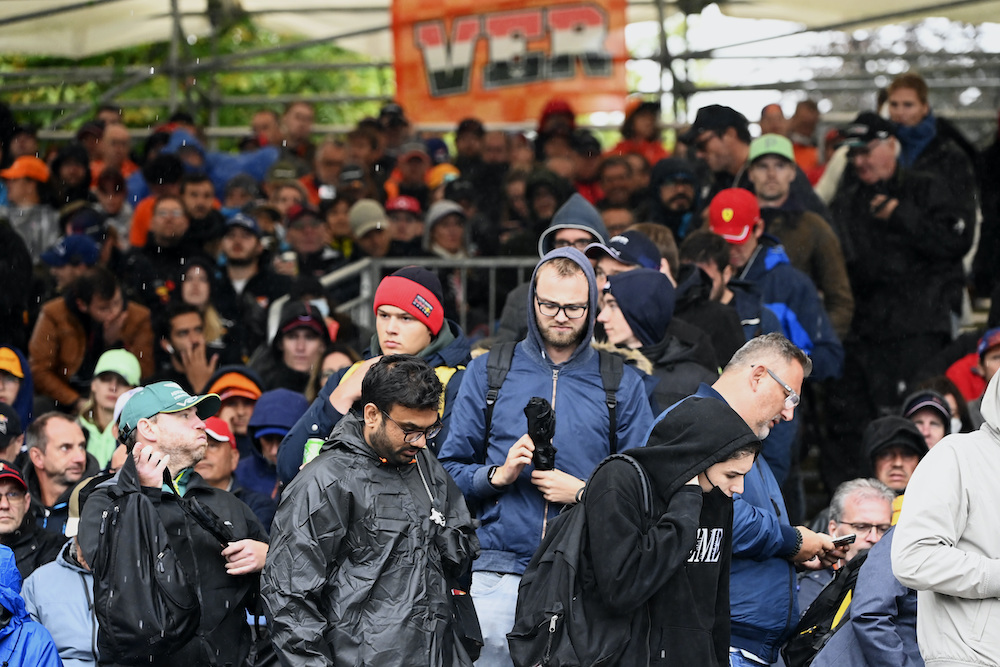 Fans stuck it out, but left without much of a reward for their loyalty. Mark Sutton/Motorsport Images

On Sunday evening, Hamilton also inferred the development was similar to Melbourne in 2020, when F1 tried to kick off its season despite the rapidly growing COVID-19 pandemic. At that time he stated the sport shouldn’t have been there but “cash is king”, and he insinuated the same this time round.

The conditions were not good enough for racing, but they were just about safe enough to lap behind the Safety Car. If there was a real intent to start the race, then when those first few laps were attempted, they should have continued for a number more. Cars circulating could potentially help clear some of the standing water, but it would also ensure they were already on track and running at the point that any possible further break in the weather occurred.

Once the cars were called into the pits again, there was no way they were going to be able to take advantage of any potential improvement. The race clock was paused based on a hope that the conditions would improve, but then that hope wasn’t backed up by the actions on track. As soon as the bare minimum was achieved to count as a race, it was called off.

And to compound matters, F1 then delivered the laughable image of a podium ceremony taking place afterwards and champagne being sprayed, just for rolling around behind the Safety Car. George Russell’s performance on Saturday was sublime – sensational even – but he should not be able to call himself a podium finisher based on Sunday, no matter how much he deserves such a result on his resume.

The fans will surely be refunded in some way, because the race didn’t happen, regardless of what the official classification says. They have to be. There were thousands and thousands who fought through horrible conditions to be there, sat through them all day and then were rewarded with a two-lap crawl behind a Safety Car. They have to be listened to.

Just like the drivers have to be listened to as well. They were when it came to the conditions being unsafe, and the right calls were made on that front, but that has still been overshadowed by the final outcome that resulted in a race being declared and points given.

Hopefully the powers that be are listening.