Home / Racing / OPINION: For what it’s worth…

Well that was quite the weekend at Silverstone, wasn’t it?

It had a bit of everything. A stunning one-lap performance, a new format with talking points and then the frankly inevitable collision between Max Verstappen and Lewis Hamilton, all in front of 140,000 fans.

I say ‘inevitable’ not just because an incident like that has looked likely all season, but based also on the Sprint and the first few corners on Sunday. Hamilton saw just how important track position was against Verstappen, because although Mercedes made a step forward at Silverstone, the two cars were so closely matched it was always going to be immensely difficult for one to overtake the other.

That had been proven when Verstappen got the jump off the line in the Sprint and Hamilton tried round the outside of Copse but had to yield, and then never seriously threatened again.

So Hamilton must have been rubbing his hands together with glee when the roles were reversed yesterday, and he got the better launch and he had the inside line for Turn 1. But Verstappen held firm round the outside in a move that brought them close to contact for the first time, and then Hamilton positioned his car on the outside of the following two corners to force Verstappen to defend the inside.

That meant a great run onto the Wellington Straight, and at this point they were clearly alongside each other but with Hamilton edging ahead, squeezing the Red Bull to the inside with just millimeters between them.

Before the race, Verstappen said he had nothing to lose. I wondered if he was serious given he is now the championship leader, and in the past he’s said he has nothing to lose when chasing Hamilton.

When that’s been the case, we’ve seen Lewis jump out of the way, like at Imola and Spain, so I wondered if Verstappen would take a similar approach. But he’s not been in this position before, and he made clear that he won’t be changing his style as he stood firm down the inside into Brooklands and forced Hamilton to back out.

We could have been talking about a controversial collision on numerous occasions before we got to Copse, such were the fine margins as each driver put it all on the line.

I don’t think any of this angered Hamilton. I think it just told him what Verstappen was likely to do. And based on that, Hamilton knew he needed the inside line to make a move stick. He got the exit out of Luffield he needed, slipstreamed behind the Red Bull, sold a dummy and just wedged a gap between car and wall on the run to Copse.

Verstappen has spent several seasons in the role of the hunter, but now that he’s leading the points and Hamilton’s the one trying to chase him down, both drivers are having to alter their approach. Glenn Dunbar/Motorsport Images

Perhaps Verstappen should have known Hamilton would do that, but perhaps not. Again, these two haven’t gone wheel-to-wheel in a fight like this where it looked so crucial to the race outcome since Max has had a comfortable lead, and there was a clear change in Hamilton’s approach. He needed to attack and give as good as he got, rather than play the long game.

‘Give as good as they get’ is what they’d both done up to that point, and to be honest I feel that’s what they both did heading into Copse. Hamilton got alongside at the very last second before turn-in, but with dirty tires and a very tight line into the corner. Verstappen had moved back to the left to give both a bit more space before turning in himself, because he knew that it was never ending well if they stayed up against the wall.

At that point, Hamilton couldn’t carry the speed he needed to in order to get through the corner and make the move stick cleanly, and started to back out. With Max committing to the outside line but not yielding either, it came just too late and left front of Mercedes met right rear of Red Bull.

It’s a penalty. One car wasn’t making the move cleanly and knew it, tried to bail out when the other didn’t and only just failed to do so. The contact wasn’t massive, but the consequence was. And that’s why I think the stewards just about got it right.

First lap or not, there was nobody ahead to distract Hamilton and Verstappen. They were racing each other in clear air, had (just) got through half the lap cleanly, and unless there’s a massive bottleneck you need to start holding drivers accountable at some stage otherwise the first lap will just be chaos.

A 10-second time penalty clearly indicates Hamilton was at fault, but rightly doesn’t take into account how it impacted the rest of his race. Whether he had a car capable of fighting back to win or had damage that eventually forced his retirement, you can’t make a penalty call based on what might happen next. The purpose of the penalty is simply to recognize his role in the incident and hurt his chances of getting the best possible result, whatever that may be.

For Verstappen, it was a huge accident and one that needs to remind everyone of the dangers involved. The car held up brilliantly, but his body was still subjected to 51G and that could be catastrophic regardless of how the car performs. 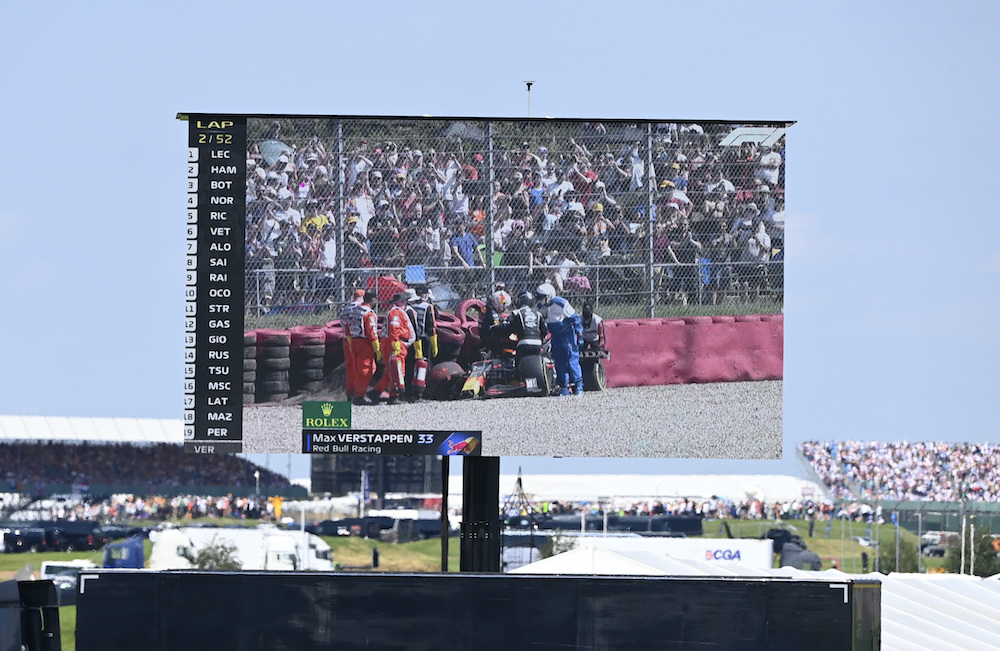 Max Verstappen emerged from his huge impact unharmed – and with a newfound clarity about what he can expect next time he’s wheel-to-wheel with his main title rival. Mark Sutton/Motorsport Images

But now, thankfully, we can say he’s fine. And he’s now also been reminded of how Hamilton will race him. He will be just as firm as the Red Bull driver when he needs to, and Verstappen will perhaps need to adopt a bit of Hamilton’s own previous approach and adjust his aggressiveness accordingly. For the first eight corners it was perfect, for the ninth… when he looks back at the season, he might wish he’d played it that bit safer knowing how it could end up.

Does that absolve Hamilton of blame for the incident? Not at all. But being right and having a crash or being wrong and having the chance to finish second at worst is a decision drivers have to weigh up all the time in a championship fight.

Where I will absolve Hamilton of blame is when it comes to his celebrations, because at the time he jumped out of his car he wasn’t aware that Verstappen had been taken to hospital. He’d asked if Max was alright after the crash and duly was told he was out of the car, but the team didn’t appear to provide him with an update and so he was understandably soaking up the moment after such a dramatic chase of Charles Leclerc in front of his home crowd.

Verstappen also didn’t know that Hamilton hadn’t been told, so he was fully entitled to call it disrespectful as he watched from hospital. I doubt he would retract that statement once he knew that either, because just like his with driving, he’s not one to change his stance.

But just because the penalty was right doesn’t make the whole incident bad. The increased tension between the two is an added factor in a fiercely competitive title battle, and it’s a fight that we’ve been waiting to see for so long.

The big flashpoints are the ones you remember – think Hamilton v Rosberg in Spain, Schumacher v Villeneuve in Jerez or Prost and Senna at Suzuka – and this has just become a massive chapter in this year’s rivalry that has the motorsport world talking, and then some. This fight now has it all.

But most importantly, whether you agree with me or not, there is absolutely no excuse for racist abuse towards Hamilton for his part in the controversy.

As emotional as some of the comments were from those both inside and outside the sport yesterday, there is a line that cannot be crossed.

I want to see more incidents and dramatic moments that fuel intense debate, and leave people more than likely angrily shouting at me how wrong they think I am – that’s good for the sport. But when it comes to racism, there is no debate to be had.