After falling to fifth overall on the opening lap, the No. 72 Murillo Racing Mercedes-AMG GT4 of Kenny Murillo and Christian Szymczak would fight back to take the overall and Silver-class win in Round 5 of the 2021 Pirelli GT4 America season at VIRginia International Raceway, their third win of the season. “This is a big family effort and I can’t thank everyone enough,” said driver Kenny Murillo, “Christian did a great job in his stint and I couldn’t be happier how the team and car performed!”

The No. 47 NOLASPORT Porsche of Matt Travis led the Pirelli GT4 America field to the green flag for Saturday’s Race 1 but it was Nick Wittmer’s No. 38 ST Racing BMW that made the move to snag second position overall and first in Silver as the No. 72 Murillo Racing Mercedes-AMG would fall to fifth overall in a hectic but clean opening lap.

Going into Turn 1 on the second racing lap Steven McAleer and the No. 11 BMW would push Wittmer out of the way and grab second overall, first in Silver as Kris Wilson’s No. 16 Mercedes-AMG would follow McAleer through to take third overall, sitting first in Am.

McAleer’s charge was not over as he would then power past the overall leading No. 47 Porsche down Madison Avenue with the three class leaders in Silver, Pro-Am, and Am running 1-2-3 overall.

Further back in Silver Tim Barber and the No. 22 BMW would grab fourth in class, sixth overall ahead of Ryan Dexter’s No. 062 Aston Martin with the No. 94 and No. 36 BimmerWorld entries of Jon Miller and James Clay stalking Dexter going into the Turn 3-4-5 complex. Miller would get past Dexter for fifth in class.

With 43 minutes left on the clock the No. 16 Mercedes would get past Travis’ No. 47 Porsche for second overall, both cars remaining in their class leads. Kenny Murillo and the bright orange No. 72 Mercedes would regroup after his disappointing opening lap and would hook to the back of the No. 47 not wanting the No. 11 car to extend his class and overall lead any further. Murillo would get past Travis for third overall, but would sit behind the McAleer by nearly 6s.

As the pit window closed for the required driver swaps Toby Grahovec, now behind the wheel of the No. 11 BMW, would remain in the overall and Silver-class lead with Jason Hart in the No. 47 Porsche sitting third overall, first in Pro-Am with John Allen and the No. 16 Mercedes leading Am, sixth overall.

With 13 minutes left on the clock the leading No. 11 BMW of Grahovec would spin the tires coming out of Turn 3, allowing the No. 72 Mercedes of Christian Szymczak to slip through at turn 4 taking the overall and Silver-class lead. The No. 47 NOLASPORT Porsche of Jason Hart would gain on the No. 11 as the two fought for second overall, allowing the No. 72 to pull out a comfortable cushion on its rivals.

Two laps later Hart would dive to the inside of the No. 11 for second overall going into Turn 1 as the leaders would then catch lapped traffic going into Oak Tree. At the same time Am leader John Allen would see a slight off-track excursion and fall to third in class with the No. 68 Smooge Toyota of Kevin Conway taking over command of the class with the No. 98 Random Vandals Racing BMW of Andrew Wiksrtrom inheriting second. 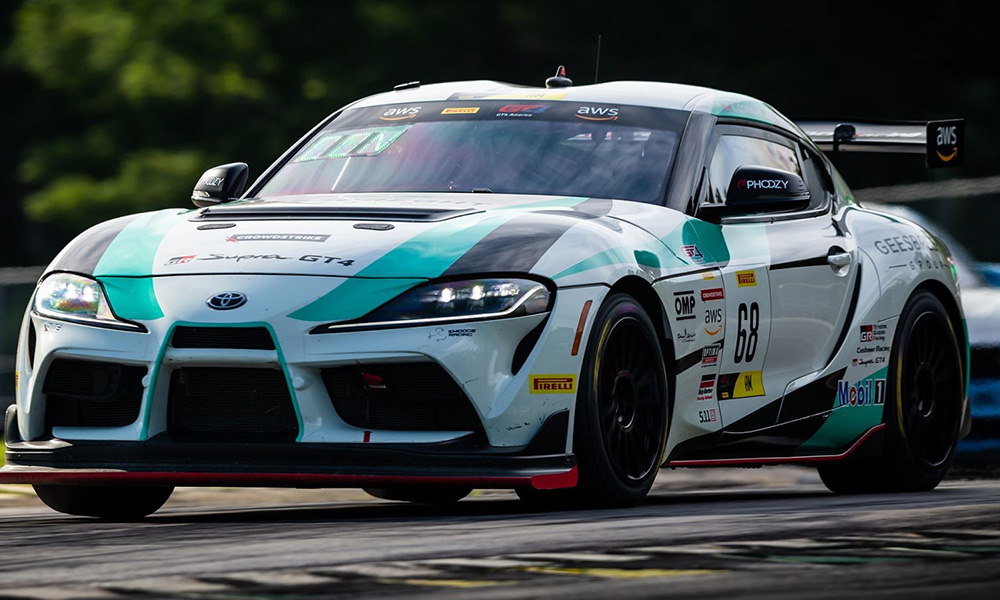 Both Brandon Davis in the No. 59 Aston Martin and the No. 119 Pro-Am BMW of Gregory Liefooghe would get past the No. 11 for third and fourth overall with Davis closing on the class leader of Jason Hart with 2 minutes remaining. On the white flag lap, the No. 119 BMW would power past Davis for second in Pro-Am with Hart holding on to the win by .121s, their fifth-straight to open the season.

Kevin Conway and the No. 68 Toyota would take the Am win, a mere .142s ahead of Wikstrom and the No. 16 Capstone Mercedes of John Allen.

The No. 72 Murillo Racing Mercedes-AMG GT4 would take the overall and Silver-class win with the No. 11 Classic BMW finishing second in class, fifth overall with the No. 22 CCR Racing/Team TFB BMW third in class, seventh overall.

Round 6 of the 2021 Pirelli GT4 America season sees the green flag fly on Sunday, June 6th at 11:10am ET, streaming live on the GT World YouTube channel and on SiriusXM Channel 392 and WebApp channel 992.