Home / Racing / MEDLAND: Come on Ferrari, get it together

It really is the hope that kills you, isn’t it?

2022 always had the potential to deliver a season where one team dominated. Despite the focus of the new regulations being to improve the racing spectacle, a big change in rules tends to see one team get it more right than the others and have a pretty clear run to the title, with convergence then closing things up over time.

This year started so differently, with both Ferrari and Red Bull closely matched and promising a title battle throughout the year that would keep everyone engaged off the back of what had been a, quite frankly, incredible 2021 from that perspective.

Three races in and we were bemoaning Red Bull’s lack of reliability and how it had given Charles Leclerc a big buffer in the drivers’ championship early on, but there was always that nagging feeling that Ferrari has not put together a sustained challenge for a decade.

Back in 2012, you have to say it was a massively impressive performance from both Ferrari and, more specifically, Fernando Alonso to take the fight to Sebastian Vettel throughout the season. Both team and driver were almost faultless throughout the year and came so close to securing the title in what was far from the quickest car.

Since then, there’s been nothing of real note. 2017 and 2018 promised championship challenges but failed to deliver, with the potential disappearing rapidly around the summer break.

In Barcelona, this year just started to hint at being different. Even though Red Bull had turned things around quickly to win back-to-back races at Imola and Miami, the first set of Ferrari upgrades certainly seemed to work in Spain. Charles Leclerc was on pole for the fourth time in six races before scampering off into the distance.

Charles Leclerc leads away from pole at the Spanish GP. Andy Hone/Motorsport Images

To be fair to Red Bull, there was less certainty about the result of Sunday’s race in Baku before Leclerc once again retired from the lead with a power unit problem. The strategies were offset and Max Verstappen looked particularly quick in the second half of his opening stint, then again on the hard compound tire after making his pit stop.

Perhaps we’d have seen Verstappen close down and beat Leclerc as he had in Miami, but the defending champion didn’t need to. Just like Sergio Perez didn’t really need to fight the Monegasque in Monaco —  Ferrari handed over victory with strategic errors.

The latter we’ve seen before and it’s frustrating, but Ferrari’s reliability had looked better in recent seasons, with no retirements due to a technical issue last year. There was the time Leclerc didn’t start in Monaco due to a gearbox problem, but he’d crashed heavily the day before to cause that damage, and then was taken out in Hungary as the team’s only other retirement.

After a start to 2022 that appeared to follow that trend – the two retirements for Carlos Sainz in Melbourne and Imola being due to racing incidents – it has all unravelled in the last three races.

Leclerc’s qualifying form is still sensational, with six poles in eight races and the last four in a row, but all four have been won by Red Bull — three wins for Verstappen and one for Sergio Perez — and there have been a pair of one-twos in that time.

That Leclerc now sits 34 points adrift of Verstappen is quite astonishing given the fact his lead was 19 points just three races ago. The Ferrari is rapid, and Leclerc is very much at one with the car, but he’s being let down badly by the lack of reliability as well as that Monaco strategy. 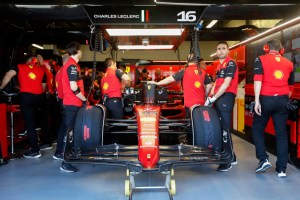 Reliability and questionable strategy calls by the team have begun unravelling 2022 at Ferrari. Carl Bingham/Motorsport Images

It’s not like Red Bull have been faultless, either, but recent history suggests that it would always resolve its issues. Plus, it’s a team that’s traditionally started a season a little slowly (in the V6 hybrid era anyway) and then come on stronger towards the end of the year. That means Ferrari needed to be taking advantage early on, but instead it has left itself with a mountain to climb.

If there’s one thing the evolution of Formula 1 has done, it’s open up a greater opportunity for Ferrari to finally be successful. Now under a budget cap, it is the only team that had a similar level of resource as Red Bull and Mercedes, but the struggles from 2020 and 2021 afforded it slightly more time than its main rivals when it came to developing its 2022 car.

This year was a major opportunity on that front, and the car itself has clearly delivered on that promise, with the ability to challenge Red Bull for honors at pretty much any circuit. Ferrari is tripping over itself when it comes to its reliability, however, and it is in danger of robbing fans of another epic title battle between two of the sport’s most exciting talents.

In a 22-race season, it is too early to write off Ferrari’s chances just based on the past three races, especially considering the issues that Red Bull suffered in the opening three, and smaller concerns that hampered Verstappen in Spain such as the DRS problem. It’s not too early to suggest Ferrari has to hit back pretty much straight away.

The gap between Red Bull and Ferrari in the constructors’ championship stands at 80 points, while Mercedes is just 39 adrift in third.

Even with the ongoing car bouncing issues, there’s a confidence that Mercedes will eventually get things right. It’s starting to look like it will be too late to really factor as a title contender, but sitting here, right now, I feel like it’s more likely that Mercedes will be regular race winners later this season than not.

The same can’t be said for Ferrari, where the overriding feeling — despite wanting to believe this year will be different — is that the challenge will only fade the longer the year goes on.

If the traditional drop off after a strong start is to be avoided, and a title battle to continue, then the Scuderia really needs to buck that trend, and buck it quickly.