Five of the six entries in the lead DPi class took times at the top of the chart in the abbreviated session, with the pole swapping back and forth a dozen times.

Kevin Magnussen was the last man standing, earning his first career pole with a lap of 1m20.031s in the No. 01 Chip Ganassi Racing Cadillac DPi-V.R, moments before a red flag ended the session with 4m37s remaining of the 15 minutes.

“We’ve been strong this year, but we haven’t really capitalized on that pace,” Magnussen said. “It’s nice to get a good start to this weekend, and it’s nice to get a pole position at GM’s home track with a Cadillac. You can’t be so unhappy with that. I knew when I signed up with Chip Ganassi that I would have a chance at winning races. We haven’t done that yet, but we’ve been leading and have been in the fight for the win. It’s been more enjoyable than anything I’ve done the last few years.”

MacNeil and Musial Jr. lead the way in qualifying at Homestead

Harry Tincknell was second in the No. 55 Mazda Motorsports RT-24P, 0.021s off Magnussen’s time. Starting on the second row will be Pipo Derani, 0.130s further back in the No.  31 Whelen Engineering Cadillac, and Ricky Taylor, an additional 0.138s behind in the No. 10 Konica Minolta Acura ARX-05.

Heistand topped GTD in the No.39 Audi. Motorsport Images

Tristan Vautier was a major threat for the pole, but he slammed sideways into the Turn 3 wall with five minutes remaining. The incident brought out a session-ending red flag and cost Vautier his two fastest laps. He will start from fifth for Saturday’s 100-minute race.

Olivier Pla was sixth in the session, 1.424s off the pace in the No. 60 Meyer Shank Racing Acura – the lone DPi not to spend time at the top of the cart.

Racing for the first time at Detroit since 2008, Corvette Racing is running its Corvette C8.Rs in a two-car GTLM exhibition class. Nick Tandy led the pair, running 1m27.283s in the silver No. 4, 0.323s ahead of teammate Jordan Taylor in the yellow No. 3. 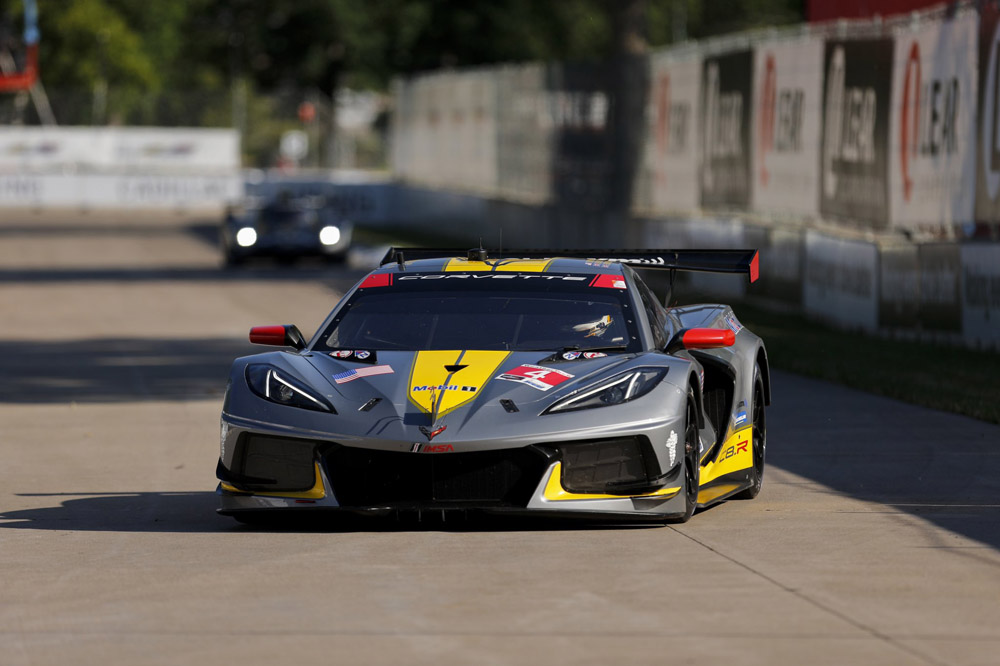 Moments after setting the fastest GTD lap, Aaron Telitz tapped the wall in the No. 14 Vasser Sullivan Lexus RC F GT3. He limped back to the pits and had to settle for fifth, +0.336s back. Madison Snow returned to qualify sixth, +.336s in the No. 1 Paul Miller Racing Lamborghini Huracan GT3. Snow experienced mechanical problems late in the morning practice, and sat out the second session while the team changed engines.

With grid positions set, the pro drivers took over the GT3 machinery to qualify for IMSA Sprint Cup points. Mario Farnbacher was fastest in the No. 76 Compass Racing Acura NSX GT3 at 1m29.871s, +0.123s ahead of Ross Gunn in the No. 23 Aston Martin, and +0.137s better than Townsend Bell in the No. 12 Lexus.