The FIA World Rally Championship heads to Rally Finland this weekend (Oct. 1-3), with home hero Kalle Rovanpera aiming to celebrate his 21st birthday with a first win on the fastest event on the calendar.

Rovanpera (below) is the hottest property in the WRC right now after becoming its youngest-ever event winner in Estonia in July, then following that up with victory in Greece’s Acropolis Rally in September.

The younger Rovanpera, who hits 21 on Friday, will put the presents to one side to chase a third-straight 20201 WRC gravel victory in his Toyota Gazoo Racing Yaris WRC over fast, flowing stages close to where he was born and raised.

Finnish drivers have won Rally Finland an incredible 55 times since it first began in 1951. Rovanpera will be looking to make it 56 in the event’s delayed 70th running, following its 2020 cancellation due to the COVID pandemic.

“Driving Rally Finland in a World Rally Car is going to be one of the coolest things for me in my career so far,” he says. “A home rally is always different, and Rally Finland is something special. You can really feel the atmosphere there.”

Cars frequently top 125mph on rollercoaster roads amid the forests and lakes of central Finland. The speed, big jumps, proximity of the trees, and blind crests masking corners mean pace notes must be perfect and delivered with pinpoint accuracy by the co-drivers.

The rally runs two months later than normal, with fall already setting in. Cooler temperatures, damper roads and less grip on the slippery gravel are challenges that drivers must counter this time.

“Now that it’s later in the year, the conditions could be really difficult if it’s wet and muddy,” Rovanpera explains. “That could change things a bit, but I’m really looking forward to it, and it’s going to be really nice to see the fans back and cheering for us on the stages.”

In the fight for the 2021 championship, Rovanpera’s teammate Sebastien Ogier holds a 44-point lead over Elfyn Evans in another factory Yaris. If results go his way, Frenchman Ogier could clinch his eighth title here with two rounds remaining.

The Toyota team is based just outside Jyvaskyla and the Yaris is undefeated at the rally since the Japanese manufacturer returned to the WRC in 2017. But Ogier is taking nothing for granted.

“The Yaris WRC was born on Finnish roads, so it should perform well there, but I’m expecting tough competition as well, including from my teammates,” he says. “Nothing is decided in the championship yet, so let’s see what approach we will take this weekend.”

Japan’s Takamoto Katsuta and 2017 winner Esapekka Lappi also drive Yaris WRCs. Katsuta has stand-in co-driver Aaron Johnston alongside, while Lappi, who drives for the privateer RTE-Motorsport squad, is back at the top level for the first time in 10 months.

Hyundai trails Toyota by 57 points in defense of its manufacturers’ title and needs strong performances from its i20 World Rally Car trio of Thierry Neuville (below), two-time and defending Rally Finland winner Ott Tanak, and Craig Breen. 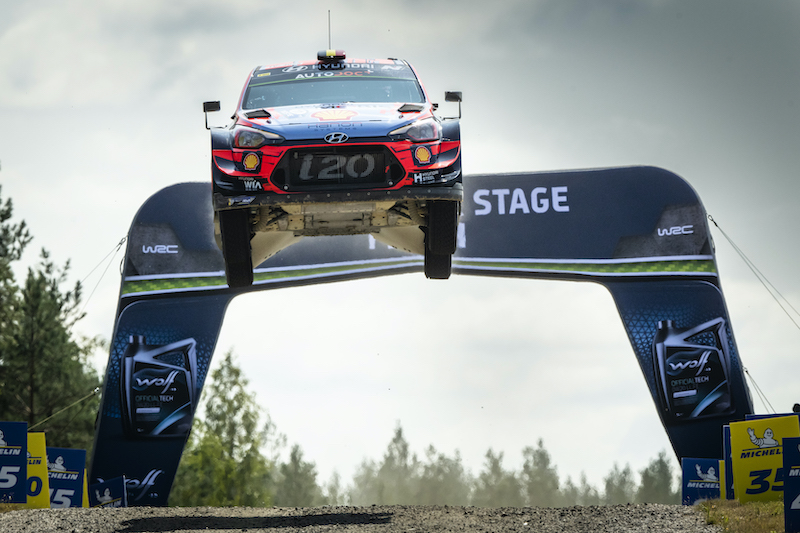 Check out WRC.com, the official home of the FIA World Rally Championship. And for the ultimate WRC experience, sign up for a WRC+  subscription to watch all stages of every rally live and on demand, whenever and wherever.