It’s the end of an era for Eddie Gossage and Texas Motor Speedway.

The only president in the track’s history, Gossage has been a forward-thinking showman that, at times, has been perceived as over-the-top and bombastic. However, the proof of his influence is in the legacy he’s created since TMS broke ground in April 1995.

Although his tenure came full circle with the NASCAR All-Star Race on June 13, it reaches its full conclusion tomorrow, with July 1 officially signaling his final day at the helm before moving on to new pastures.

As he prepared to turn off his office lights for the final time, Gossage sat down with RACER to reflect on the past 28 years.

RACER: Did you ever think that the majority of your life’s work would be here?

EDDIE GOSSAGE: Well, I knew that this would be on my tombstone. I’ve spent almost half my life doing this, and what I didn’t know when it started was how long that run would be. It’s 27 and a half, 28 years since Bruton called. I knew this would be the defining mark in my career and probably my life, because how many people build a stadium of any size, much less one that was 150,000 seats to start with?

I think if I had actually understood the gravity of it all and the near-impossibility of it all, that it would have just intimidated the heck out of me. But it’s like the old deal of, “How do you eat an elephant? One bite at a time.” It’s just one day at a time, one thing at a time, and over time, it becomes this unbelievable place.

I say ‘near-impossible’ – if you weren’t of Bruton’s personality, to build something like this is just virtually impossible because there are so many people that insert themselves in the process that you have to either work around or run over. That’s everybody from politicians, to business leaders, to community leaders, and none of them are helping you build it. They’re all just in your way, and they don’t want to get out of your way. So, you got to go around them or over them, and we did some of both. There were just so many people that were in the way, and they’ll tell you that they were instrumental in building this place.

R: Obviously, the Dallas-Fort Worth area is a top five sports market, but for a long time Texas wasn’t really known as a racing market.

EG: Bruton’s not big on studies. He’s big on your gut feeling. And he’s told me repeatedly, “If you don’t feel it in your gut, the answer is no.” We, in our gut, felt like we were in exactly the right place. When we announced this place, it was 70,000 seats. As each day went on, things occurred in the community. You could feel the support and feel the interest, and it was just at a time when the sport was in a straight-up vertical climb. I talked to Bruton all day, all night and it did seem like almost every night he’d go, “Hey, let me ask you a question, kid.” What’s that? “Could you build 75,000 seats? Can you sell 75,000 seats?” Yeah, we can sell 75,000. You bet we can. Then one night I realized we’re at 150,000 seats. What if we throw a party and nobody comes? 150,000 is a big hole to fill.

So I said, “Hey, you know, let’s just stop here. Let’s do this and leave it here.” And he was fine with that. So that first race sold out instantly, and the second year sold out instantly. The third year we added 16,000 temporary seats right over here (points over towards Turn 2) which was a mistake. We shouldn’t have done that, but we did and sold them out. We were killing it. There was monstrous demand. It was a very heady time. The momentum we had and the success we were having… nobody had ever built a speedway with that many seats to start with, because the only thing bigger is Indianapolis. We obviously felt great about it because we put the money into it to do it and we built it and it worked. Man, we were proud. It was awesome. It was a great time. 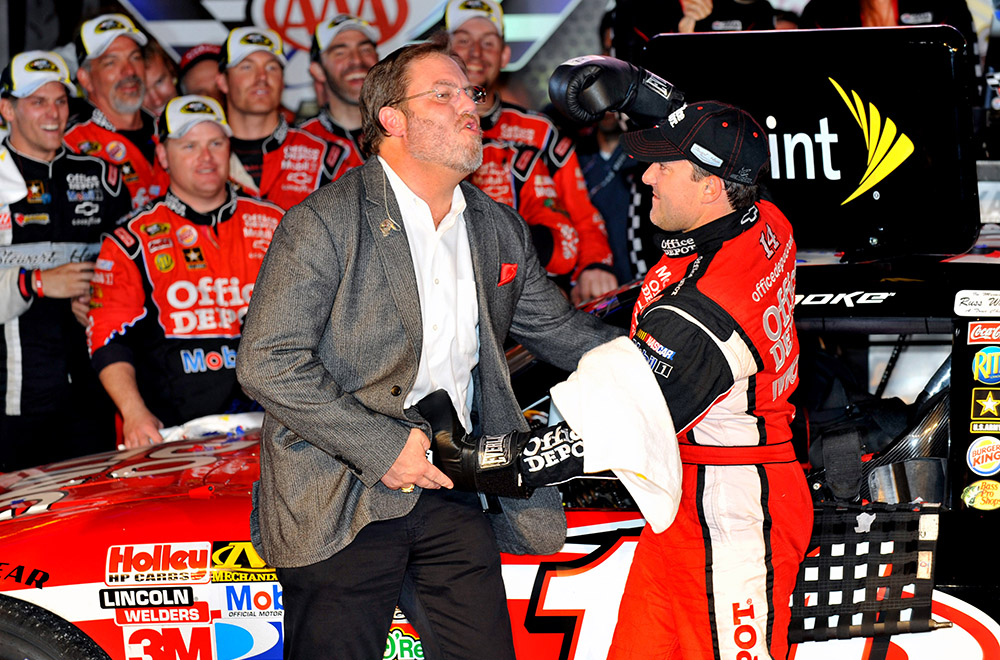 Tony Stewart celebrates his win at TMS in 2011 by delivering a punch to the gut of Gossage, who presented him with the gloves in victory lane. Motorsport Images

R: NASCAR, IndyCar, IROC, Red Bull Air Race, IMSA (American Le Mans Series), IndyCar championship finales, all sorts of stuff at the dirt track, now an All-Star Race… this place has housed a lot of great racing over the years. Is there anything you never got to do that you really wanted to?

EG: The season finale for NASCAR. No question. We earned it. If you can earn it on merit, we did. I hate that we never got a crack at that. Market size, crowd size, purse size… we were way ahead of everybody else, and we never got the special race. Now, I say that with tremendous appreciation for the fact that we got a special race (with the All-Star Race). Having the All-Star race is a great exclamation point to our 25th season. For me, personally, it’s a great exclamation point to end with, because the All-Star Race isn’t just another race. If you’d asked me that three years ago, I’d have been much stronger on (the subject of never getting the championship finale). It’s all good.

R: A track isn’t much different than a house in that random things are likely to need attention. The challenges TMS has faced are pretty well documented -–the weepers in Turn 2 nearly two decades ago, drainage problems and the events that led to the recent repave and reconfiguration. Was there any challenge you were hit with and genuinely didn’t know how you were going to end up?

EG: Turn 2 is a handful. I don’t think you apologize for that. They didn’t apologize for the tunnel turn in Pocono. You don’t apologize because the track is so narrow at Darlington. There’s bumps in Turn 4 at Charlotte. There were weepers at Richmond. There were weepers at Kansas. That’s unfortunately not unique to us. The tough one was those first couple of years. The geometry as you’d come off of (Turns) 2 and 4, and then the water coming through the track, had to be addressed. People that don’t live here don’t have a full appreciation for how much the earth moves in North Texas.

Ultimately, we had to build a bridge. People don’t realize the track sits on a concrete bridge underground now so that it won’t move and so that it has a way to drain. I’m not an engineer. I did not design this place. To this day, I don’t have anything to say. I’m not involved in the paving or the mix, it’s not what I do. No track president does.