This, weekend the Superbike World Championship will set up its big top at the majestic Misano in Italy. Historically, the Kawasaki Racing Team WorldSBK has ruled the series with an iron fist, team rider Jonathan Rea winning six straight championships and the Kawasaki KHI race department responsible for the same number of Manufacturers’ crowns.

And so far, so good in 2021; Rea leading the title chase after two rounds. And then there is Alex Lowes. Sixth in the 2020 WSBK championship fight, Lowes raced well last season in his first year with the lime green marque, but the 30 year-old Englishman wants more in ’21.

After finishing second, second and third in the opening Aragon races. Bad luck haunted Lowes’ garage at the recent Estoril round. He ultimately finished 19-6-4 in Portugal, but now he and the entire KRT enterprise will look to Misano come Saturday and Sunday and reach for a higher gear in his quest to become the ’21 WSBK champion.

Q: Is it nice to be finally back in to something of a traditional racing rhythm with the WSBK championship?

ALEX LOWES: Yeah, because obviously you spend so much of your life waiting for the next race. You have a focus on the next race. You know when the race is going to be. You train for the race. You think about the race. With the lockdown, we didn’t know what was happening and the calendar kept changing. We didn’t know how long it was all going to be, and it was just strange. It was the same for everybody, but it a strange year and a strange situation. It’s great to be back to it. You feel like you have some momentum, and then we’ll have the next race at Donington after that, which is a race we have not had in a couple of years. From there we’ll have Assen. It’s more of a normal European race schedule now, so yeah, it’s nice to be back racing. Hopefully we can have fans back at 100 percent soon. There will be a few fans coming back this weekend, which will be nice. Everybody just wants to get back to normal now.

AL: It’s a fantastic team. Obviously last year was, like we said, a strange year, and we never thought we’d be going to races where you wear you mask and stay in your little bubble group, and you weren’t allowed to mix with or meet with other people in the paddock. But I was able to get to know the team a bit more, and I was able to spend a bit of time in Barcelona with the guys. They’re a great group of guys with a lot of experience, so there are a lot of things you can learn from being around them.

Q: It certainly seems like Jonathan Rea and you get along well.

AL: Yeah, we get along good. Obviously, you want to beat your teammate and he’s always winning, so that’s a hard job at the minute, but I’ll tell you one thing: I’m getting a lot closer all of the time, and we’re trying to be more similar. That’s my focus: To keep him close and to try and beat him. In general, we have a good relationship and off the bike we definitely get on well and we have a special relationship, but a good relationship, as well.

Q: Perhaps the best of times and the worst of times with your results at the Aragon and Estoril rounds. What do you think thus far?

AL: Yeah, I’m happy in general. Obviously, we’re racers, we always want to do better. Unless you win every race, you always want to try and improve. I’m happy so far. This year we’ve made a good step with my understanding of the bike, and I feel a lot more prepared now for all the different situations. At the opening round at Aragon we had some damp races and we had some wet sessions, and I was able to be fast in all of those conditions. That gave me a lot of confidence, and obviously there are a lot of different tracks coming up, some new tracks, and I’m very excited to try the bike on these new tracks and to try and get on the podium every weekend. That’s my target now. 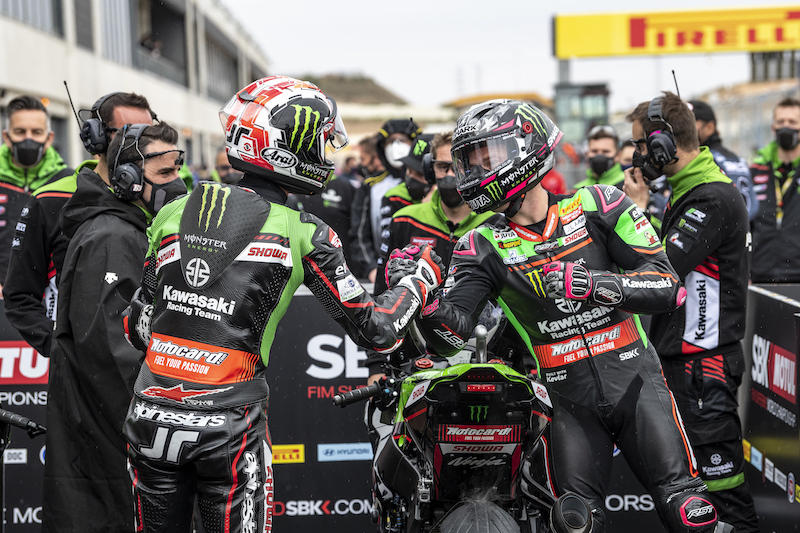 Q: Speaking of the Ninja ZX-10RR, do you have a good relationship with the motorcycle?

AL: Yes, I like it. Obviously I was riding a different bike for Yamaha for four years, and you sort of get stuck in that. You try to ride that bike the way that bike needs to be ridden, so it’s taken me a little bit of time to totally understand the Kawasaki, but it is so strong, and it stays on the pace and it is good on acceleration. I’m trying to ride the bike more in that way and it just took a little bit of time. Now, I understand exactly what I need to do. I’m not doing it 100 percent just yet, but it is getting a lot more natural for me to ride the bike how it needs to be ridden, and that’s why the results are improving.

Q: During every given World Superbike weekend, all of you guys, as competitors, are sent out to race three different times. That’s a lot of racing over 48 hours!

AL: It’s good. Obviously I speak to my brother (ED: Sam Lowes competes for the Elf Marc VDS Racing Team in Moto2) a lot and they just have one chance at every MotoGP weekend. If you don’t have the best race, you’ve got to wait a long time to try it again. At the same time, if you have a really good race, you have to back it up the next day. I like the schedule. I like how it gives you an opportunity to either fix a mistake or repeat a result. The only thing that has been quite hard, and something that I really need to focus on, is that when you arrive at a new circuit with the bike on Friday, you only have two 40-minute sessions. Then on Saturday, you have qualifying and then you are directly into the race. Sometimes you’re only on the bike for a little bit when you don’t have that much experience with a track. Apart from that, racing is the most enjoyable part of riding bikes, and that’s what we like to do. Yeah, it’s nice to test and try new stuff, and do the practices or do a good lap in qualifying, but racing is the bit you really enjoy. The more races the better for me.

Q: What’s your take on the WSBK competitive landscape thus far in 2021?

AL: Obviously, Jonathan is winning again at the start of the season, but I think the championship is the strongest it has been in a long time. There are lots of guys that can win. There are a lot of bikes and teams that can win. If you go back seven or eight years, there was maybe Aprilia and Kawasaki that could win and then you had Ducati. Some of the teams were nearly there, but not quite. Now, and with everybody slowly improving, there are a lot of good bikes and a lot of good riders, and the teams have upped their levels, as well. I think what you’re seeing is some great racing this year. For me, I think the level is the highest it has been, certainly since I’ve been involved here since 2014. The current level now of the bikes, teams and riders combined, is the best that I have been involved with.

Q: Can you be the 2021 WorldSBK World Champion?

AL: Yeah, I can win the World Championship. I think I need to improve in a couple of areas just to get that last little bit and beat the guy on the other side of the garage. It’s a challenge that I’m really excited about, and I really believe in myself to get there. I just need to be calm at the start of the year. Like we said, we have three races a weekend and 39 races over the course of the year, so it is about being smart now and building up the confidence an building some momentum. That’s the target.