Home / Racing / INSIGHT: Why the timing’s right for change at Mercedes

It had already been reported, and the drivers knew, so their attempts to bat away the questions during the Dutch Grand Prix were not the most successful.

“I know where I’ll be driving next year,” George Russell admitted. “Verbally (told) before Spa. I’m not going to sit here and lie and not say the truth. The truth is there’s nothing to announce, but I’m aware of the situation of where I’ll be racing next year and I was informed just prior to Spa.”

After all-but-admitting that he knew his future too, Valtteri Bottas betrayed the fact that it wasn’t at Mercedes by talking about a new project.

“A multi-year contract would be nice, that’s something I never had before in Formula 1,” Bottas said. “That way I definitely could give full commitment to the team, knowing that the work will continue.

“I still have quite a few years in Formula 1. I really want to continue in Formula 1, for sure.”

If that wasn’t enough confirmation for anyone, then the change in tone from Lewis Hamilton – whom Mercedes has taken advice from, but not bowed down to – regarding Russell really sealed the deal.

“(Russell) is the future, he’s one of the members of the future of the sport. I think he’s already shown incredible driving so far, and I’m sure he’s going to continue to grow. So where better to do it than in a great team like this or what team wherever he goes to?”

Prior to that, Hamilton hadn’t really entertained the idea of Russell joining him; at least, not in public. He had been steadfast in his support of Bottas, and it’s clear to see why.

Bottas has been the perfect teammate for Hamilton, even if he hasn’t been the most exciting one from a neutral’s point of view. The Finn has regularly been the driver second or third on the road behind his more decorated team leader, and has been able to push him particularly hard in qualifying.

Seeing Bottas pick up 17 pole positions in his 92 races for Mercedes so far is a solid effort when compared to the 40 achieved by the most successful qualifier in F1 history. But of those 17 occasions, precious few have been converted into victories: five, to be precise.

Regularly he has dropped back from that position; his race pace not quite matching his qualifying performances. Certainly, he was not at the level of Hamilton and Max Verstappen on most Sundays. But then, Mercedes didn’t always need him to be.

Quite often, Bottas was required to make life strategically difficult for Verstappen, to be the spanner in the works that allowed Hamilton a better chance of victory against a Red Bull that was regularly lacking a second driver at the sharp end. That has even continued this year, where Sergio Perez – on the podium only twice ,compared to seven time for Bottas – has lacked the consistency needed to put Red Bull top of the constructors’ standings.

So Bottas hasn’t needed to change anything from a Mercedes point of view up until now. He has fulfilled the role perfectly and ensured they won every constructors’ championship – and that Hamilton has claimed every drivers’ title – since he joined.

But all good things must come to an end, and it’s definitely time for that. 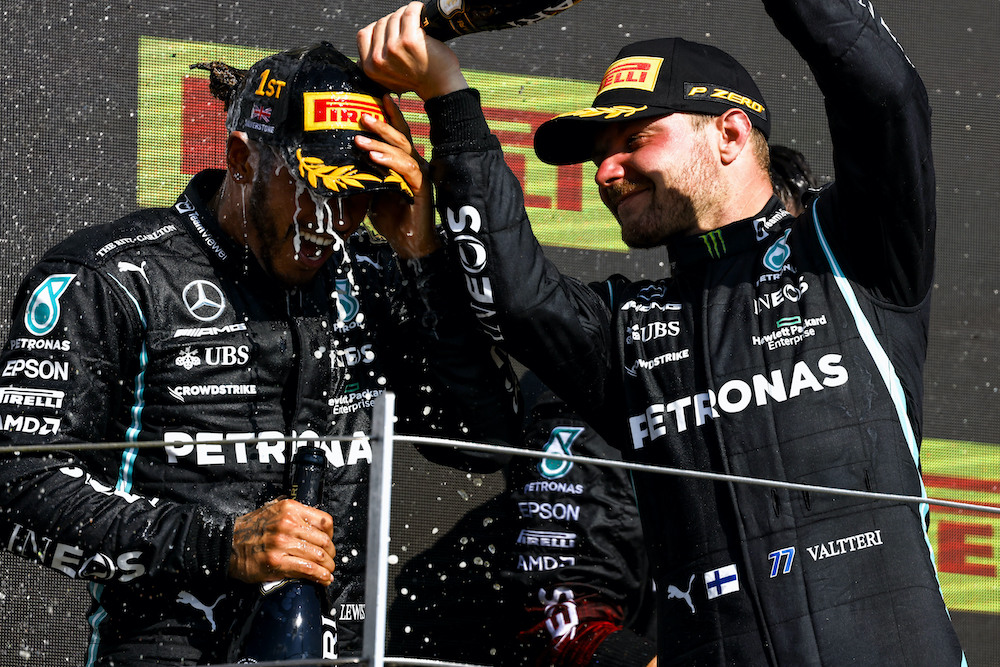 Bottas has performed the role required of him by Mercedes perfectly during his years with the team. Glenn Dunbar/Motorsport Images

Confirmation of Russell’s promotion will come on Tuesday (if it were even needed after the Bottas announcement), and Mercedes simply couldn’t ignore the performances the Briton was delivering. Some of his qualifying laps in the Williams have been superb, and that has convinced the team that he can do a similar job to Bottas on a Saturday.

With that strength retained, the expectation is for Russell to be an upgrade on Sundays. He has made mistakes in his young career so far, but has also driven impressively under pressure, often having to be defensive after qualifying an uncompetitive Williams further up the grid than it really deserved to be.

He has also shown he can be a team player, taking the opportunity to tell the world when he informed Williams it should prioritize Nicholas Latifi and sacrifice his own race when his teammate was running in the top three early in the chaotic Hungarian Grand Prix. Russell told me that wasn’t a pointed comment, but it certainly was a smart one either way.

Not that Mercedes particularly needs Russell to be that same team player that Bottas has been, because he has been chosen for a different role. Bottas was picked as a very solid, quick team player who would steady Mercedes after the destabilizing spell when Nico Rosberg and Hamilton fought. He had four years of experience behind him, and turned 28 in the year he joined alongside a 32-year-old Hamilton.

Now Bottas is that 32-year-old, Hamilton approaching the later stages of his career and Russell with it all ahead of him at just 23. As the defending champion himself said, he’s the future.

Which is why he couldn’t be allowed to stagnate and needed his big break, and why Bottas also needed a new opportunity. The Finn has done his time, but without Hamilton making a shock decision to stop, he was never going to get his chance to lead at Mercedes, and so that prospect comes elsewhere.

A year ago might have yielded Bottas better options on the grid given the amount of driver movement elsewhere, but he is at least getting to be a big fish in a smaller pond at Alfa Romeo, and will be called upon as the experienced leader to drive the team forward. Whether 2022 offers a more competitive opportunity than 2021 does for that team remains to be seen, but at Mercedes the best-case scenario was once again playing second fiddle to Hamilton.

Bottas gets the chance to rebuild his reputation a little and prove himself as one of the best drivers on the grid who just happened to be paired with an even better one for the past five years. For Russell, a slightly different challenge awaits, as he doesn’t necessarily need to take the fight to Hamilton, but he does have to show himself to be good enough to succeed the seven-time world champion as the team’s focal point at some stage in the future – something that was never really expected of Bottas.

Whether either of them take those chances or not will be in their own hands.