Home / Racing / INSIGHT: What next for Carlin’s IndyCar program?

If there’s one constant theme across Carlin’s four years in IndyCar, it’s the struggle for continuity. There have been fluctuating car counts. Fluctuating sponsorship arrangements. Fluctuating drivers. A global pandemic. And that’s before you count the more isolated setbacks, like having both Max Chilton and Pato O’Ward bumped from the Indy 500 in 2019, or being forced to sit out this year’s Indy GP after Chilton encountered travel problems while trying to return from the UK.

Some of that comes with the territory of team ownership. Carlin has competed in 20 different championships since it was founded in 1996, the overwhelming majority of which have been focused around open-wheelers. There’s been significant success along the way, which makes the team’s current struggle to gain momentum in IndyCar all the more frustrating for team boss Trevor Carlin.

“It’s been tough for everybody,” he tells RACER. “The pandemic side of things… and because we’ve been dealing with so many other issues, the issues we’ve had with racing don’t seem to be that distressing. Everyone is just plowing through and trying to cope as best as they can. The worst thing, really, is that we just lost a bit of inertia in trying to push the team forward. Sponsorship deals that we’d been chasing have been put on hold and haven’t come to fruition, so that stopped us from getting the team back up to two cars. That’s obviously been our target.

“So we’ve been in a holding pattern, really, for the last two years, and we’re just trying to find a way to get back on track. We’re working on a couple of deals at the moment to get some funding in, so Max could either carry on, or we could bring somebody else into the team. We’ve definitely got nothing signed, sealed and delivered yet, so it’s going to be another painful couple of months, I think.”

Chilton currently holds the keys to Carlin’s IndyCar future. Or at least, its ability to prepare for one. The Brit has been a constant presence in Carlin’s IndyCar line-up since the beginning – first as a full-timer, then a road/street specialist, and now as a road/street plus Indy 500 driver – and was an alumnus of the team’s storied British F3 program before that. The roots run deeper still when you consider that Carlin falls under the umbrella of the Capsicum Motorsport; a company co-owned by Chilton’s father Grahame. Max’s presence in the team is underwritten by a significant amount of funding, but with a lack of clarity over his intentions for next season, that’s income that Carlin can’t yet rely on for 2022.

“(Going into) this year, we had the commitment that Max was going to do the season, so we could plan around that,” Carlin says. “But at the moment we don’t know if he’s doing next season, so we can’t plan. There are other drivers out there with some funding, but of course none of them have got a full budget. So I can’t commit to them yet until I get some more team funding. It’s a real chicken and egg. And there are some quite exciting drivers out there that it would be nice to bring in. But I just haven’t managed to close a team sponsor to help me with that yet.

“The problem is, I can’t start the year without the money in place. I’ve got to pay the wages, the rent, all this stuff, so I don’t want to start a program and then have to stop. Once you start (a season), you’re sort of obliged to carry on. So, it is tricky. It’s a fine line.”

Carlin is exploring a range of options to shore the team up ahead of 2022, ranging from traditional sponsorships, to funded drivers, to partnering with other teams in the Coyne/Vasser Sullivan vein. The stakes are high: Carlin admits that what happens over the next few weeks could well determine whether the team’s IndyCar program makes it through the winter.

“I’m open to anything to keep the team going and alive,” he says. “We’ve got great blokes, and I think we do well as a one-car team on quite limited funding. But I don’t want to just keep surviving. I either want to make a step forwards, or reconsider what we do as a team over here in the States.”

There’s no firm make-or-break deadline to determine the team’s future. “I don’t like to put dates on things,” Carlin says, “because if you put a date on something, usually the day after that, the phone rings. “ But the practicalities of needing to prepare for a relatively early start to the 2022 season imposes a deadline of its own. 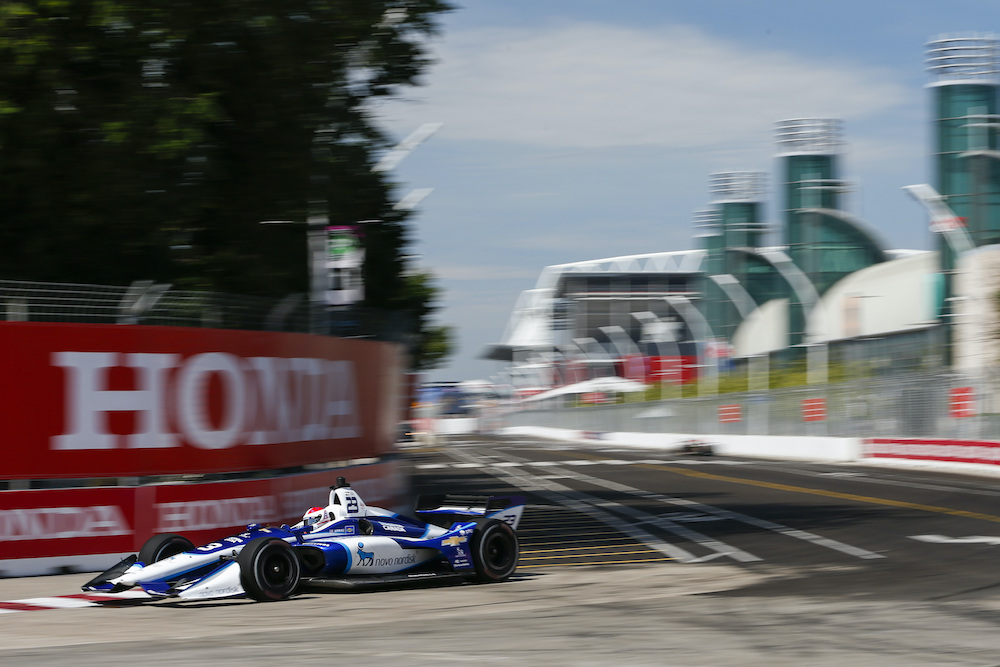 “Really, you need to have a deal in place before Christmas, because the season starts so early next year,” Carlin says. “Realistically, we’ll be testing in the first week of January, I’d imagine, and St Pete’s the 29th of February. So you’ve really got to get a wiggle on, or you won’t be ready. But the cars aren’t changing, so it’s just a livery change and prep. So that’s straightforward. But the guys have got to take some holiday and all that, so before you know it, it’s November, then it’s December, and then we’re rocking and rolling. We’ll do our best to still be here; we’ve got all the kit, we’ve got two or three cars, got all the trucks and equipment to run two cars.”

While Carlin’s thinking is driven largely by pragmatism, it’s not unfair to suggest that he’s also motivated by the sense that IndyCar remains unfinished business for his team. Outside of winning the 2016 Indy Lights title it hasn’t managed to shake off the scrappy underdog label in the States yet, but in Europe, Carlin is recognized as an established powerhouse. Hidden among the frustrations of the 2021 IndyCar season have been genuine bright spots – particularly the car’s pace on ovals – and Carlin sees that as evidence that he has foundations for something worth building upon.

“(Those results) get your hopes up, your positivity up,” he says. “Max has qualified in the Fast 12 at the previous two races (before Long Beach). And we’ve got some development stuff up our sleeve if we continue. We learned a lot at Laguna. We didn’t do the test, because we didn’t have the budget to do the test. And we qualified really well, but our race car was atrocious. If we’d done the test… now with the experience of having done the race distance, we know exactly how to fix it. But because we didn’t get the test…

“And people tend to forget that when Pato did that race for us at COTA (in 2019) and finished eighth, if he’d had a better pitstop he’d have been in the top six. And the car has moved on a lot since then. So it would be nice to have a real crack at it.

“But I’m philosophical as well, because we’ve been very fortunate. I never even dreamed of having an IndyCar team. We’ve managed to have an IndyCar team, done four full seasons, two of them with two cars… I think that’s an achievement in itself. And with our budget level, I think we’ve punched above our weight at times.

“On the other side, I love motor racing, I really enjoy it, and I love to be competitive. And there’s only so long you can go without the sniff of getting a good result. It’s hard enough even when you’re winning. When you’re not winning, it becomes a bit soul-destroying. But IndyCar has been a really good adventure, and I’d rather it didn’t end.”