Home / Racing / INSIGHT: The Honda/Red Bull marriage is not over yet

2021 has been proving to be a bittersweet year for Honda. Last year it announced it would be withdrawing from Formula 1 at the end of this season, but it wasn’t willing to go quietly, so it was all hands to the pump to upgrade the power unit as much as possible in time for its farewell.

One thing that did show was its commitment to success in F1, even when it was cutting short its timeframe in which achieve it. You could view withdrawing as the cheap option, but after that there were no shortcuts taken with the project.

Fast-tracking development was an added investment, and one that has been rewarded with arguably the best power unit on the grid at this stage of the season. A recent update to the Energy Store (ES) definitely paid off, with Max Verstappen winning the first two races (well, being classified P1 in Spa as well as Zandvoort) with the upgrade and being quick at Monza of all places before his recovery from 20th to second in Russia.

And that’s the first thing that is so bittersweet. Honda’s departure has actually led to its most competitive position since returning to F1 in 2015, because it attacked 2021 in a way others didn’t. Mercedes has 2022’s new regulations to focus on in tandem with a new car, and Ferrari is in a big rebuilding process, so Honda stole a march this year by having an extra focus.

With that comes the frustration that after so much effort, there’s only one real chance to reap the big rewards with championship success, and it’s this year. But Honda also sees the value of its investment and partnership with Red Bull, and isn’t walking away without looking back. In fact, it’s not quite walking away yet at all.

While Honda’s development efforts this year have a short shelf life, its partnership with Red Bull is poised to yield further dividends beyond 2021. Mark Sutton/Motorsport Images

It was easy to get caught up in the more eye-catching bit of news this week as the RB16B will be decked out in a special Honda livery to mark what should have been the Japanese Grand Prix weekend — another bittersweet moment, as Honda won’t sign off with its home race this year — but there was a different announcement on Thursday morning that was particularly noteworthy.

Honda never hid the fact that it would work out a transition with Red Bull in order to allow its power unit IP to be taken over by the new Red Bull Powertrains. But exactly what that transition would look like had not been made public over the months since the original deal was announced. Now, we know it looks like a significant Honda involvement in 2022.

Unless a sponsorship deal is announced, then the Honda name will not be on the Red Bull next year, but there will be plenty of collaboration between the two companies on the F1 front, as the announcement detailed:

“Honda will support Red Bull Powertrains in building the 2022 PU and also provide trackside and race operation support from Japan throughout the 2022 season, and from 2023, Red Bull Powertrains will take responsibility for all manufacturing and servicing of Red Bull Racing and Scuderia AlphaTauri’s engines.”

If we break that down into even more simple terms, Honda will still be building the power unit and running it. At least in some form.

Obviously that will be on a sliding scale in terms of input from Red Bull as it builds up to 2023, but even then the confirmation that “employees of Honda Racing Development UK (Milton Keynes) will become employees of Red Bull Powertrains” highlights how much of the same team will be working on the engines. Essentially, an arm of Honda’s racing program has been absorbed into Red Bull.

Far from that being a simple takeover, Honda isn’t cutting ties at that point, ether. The whole process has enabled Red Bull and Honda to find more common ground for the future, and so they will partner on multiple different motorsport projects, including their young driver programs and brand marketing. 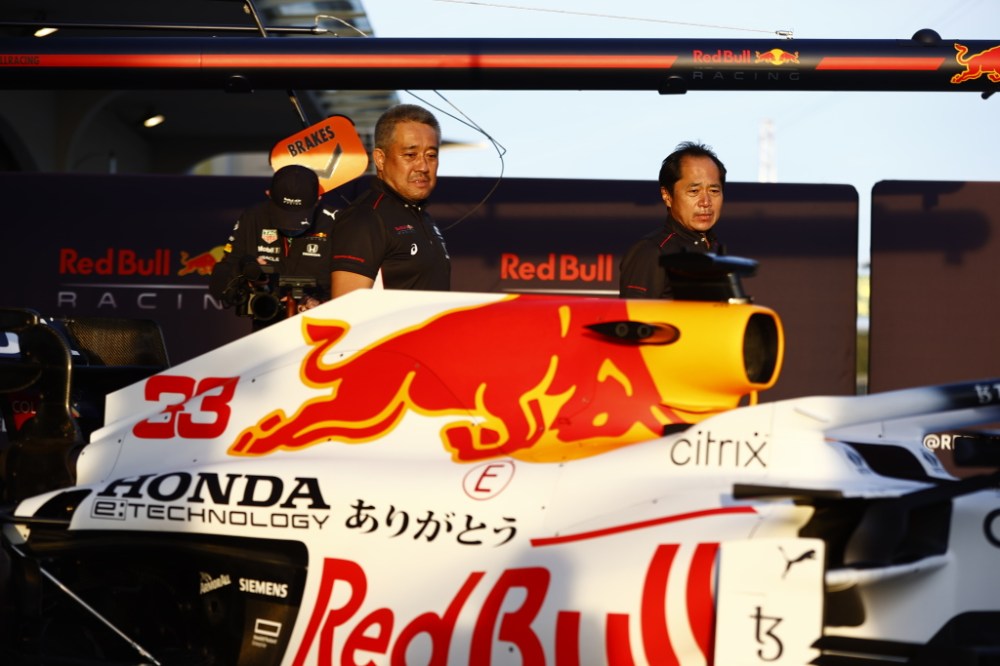 Toyoharu Tanabe, Honda’s F1 technical director, and Masashi Yamamoto, general manager, Honda Motorsport, look over the unique Red Bull Racing RB16B for the Turkish GP, the announcement of which coincided with revelation of a closer collaboration between the two companies. Andy Hone/Motorsport Images

And a notable part of the evolution is the way Honda will now run all of its motorsport under one umbrella as Honda Racing Corporation (HRC). If that’s familiar to you, it’s because that’s the motorcycle arm of its racing projects, or at least has been until now. Red Bull has long been involved in motorcycle racing, and now its Honda links will extend to a wider range of motorsport activities, which opens up numerous possibilities.

F1 aside, in many other disciplines, Red Bull needs the hardware from a manufacturer in order to have a presence. It wanted to give its drivers seat time in DTM this year, so partnered with Ferrari and AF Corse in order to do so. Could we see Honda involved in future?

While Honda Performance Development (HPD) in North America remains under a different umbrella of the wider Honda brand, we already know it will be in LMDh from 2023 onwards. At a time when its F1 input will have changed, and with the Hypercar rules allowing LMDh cars to run at Le Mans, perhaps that will see collaboration with Red Bull in the world’s biggest 24-hour race. Imagine Max Verstappen at Circuit de la Sarthe…

A lot of this is just me letting my mind wander, but that’s what the Red Bull and Honda announcement allows us to do. The rebranding and rehoming of the power unit won’t lessen the Honda influence, and the wider partnership outside of F1 is one that is full of potential. Especially if this year ends with one or both of the F1 world championships going the way of Red Bull Racing Honda.

The bittersweet year might still have the sweetest of outcomes, but either way it’s not going to be the firm ending that it perhaps looked like being 12 months ago.