Home / Racing / INSIGHT: Sean Johnston on flying the Stars and Stripes in the WRC

When it comes to his single-minded mission to take the Stars and Stripes to the pinnacle of international rallying, Sean Johnston isn’t going to let a little thing like being flat on his back with the head cold from hell get in his way. Laid low in his Munich apartment just a week out from the FIA World Rally Championship’s penultimate round, the all-asphalt Rally Catalunya, the 30-year-old American saw opportunity in his plight.

“I couldn’t do a whole lot else, so I used the down time to watch a ton of Catalunya onboards – even more than usual,” he says, now back on his feet and preparing to head to Spain for the Oct. 15-17 event when RACER calls in. “Getting familiar with the stages and checking out the lines the top guys are taking is incredibly useful preparation for a rally we haven’t competed on before.”

“We” being Johnston and his co-driver, Alex Kihurani, who form the only all-American crew competing regularly in the WRC. Johnston’s behind the wheel and Kihurani calls the pace notes that define the road ahead – corner types and speeds, crests, jumps, and potential hazards, all delivered in a succinct semi-code that primes the driver without disrupting his flow – on the multiple special stages that make up each rally’s competitive mileage.

Today’s WRC is a flat-out sprint from start to finish, with rallies frequently won by just a handful of seconds, meaning the relationship between driver and co-driver has never been more crucial to ultimate success or failure. A mistake by one has repercussions for both, often delivered in crunching style when the roadside furniture can be trees, walls or precipitous drops.

“It’s an art form to describe the road in a way that’s so concise – giving me enough information to let me know what I need to do, but not overloading me,” says Johnston of Kihurani’s role. “Alex says that he’s driving the car through his voice – not just from the information he’s giving, but in the timing and intonation of his delivery. There’s so much goes into making a good set of notes, and that’s just one of the challenges I love about rallying. For sure, the drivers get most of the spotlight, but rallying’s a sport that’s all about teamwork, and the relationship between a driver and co-driver is a truly special one.”

Johnston and Kihurani’s partnership began in 2018 in the German-based, all-asphalt ADAC Opel Rallye Cup one-make series. The following year, they made the massive leap to the WRC, finishing fourth overall in the Junior World Rally Championship, before moving up to the all-wheel-drive machinery of WRC-3 in 2020 with an R5-spec Citroen C3 run by the French Sainteloc Junior Team.

Staying with Sainteloc and Citroen, the duo’s climb up the WRC pyramid continued in 2021 with a move to WRC-2, just one level below the full-on World Rally Cars driven by the likes of seven-time and reigning WRC champ Sebastien Ogier and 2019 title-winner Ott Tanak.

It’s been a rapid ascent, especially given the relative inexperience of Johnston in a series where the mix of gravel, asphalt and snow-based events puts experience at a premium. Philly-raised but London-based Kihurani began co-driving on American rallies in 2003, joining the benchmark Subaru Rally Team USA in ’08 before relocating to Europe in ’12 to chase his WRC dreams. But for Johnston, that 2018 season in Germany was his first in a rally car. Prior to that, he’d been pursuing a career in sports car racing, albeit from an unconventional entry point.

“It started out just watching Champ Car with my brother,” says Northern California native Johnston, “and he took me to my first race [at Portland] when I was seven. Alex Zanardi won the race, did donuts right in front of me, and that’s the moment it became crystal clear that motorsports is what I needed to do with my life. But coming from Mt. Shasta, a super-small town, we didn’t have a kart track, so my way to live that passion as a kid growing up was through video games.

“During my junior year at Cal Poly San Luis Obispo, they brought the Nissan GT Academy to the U.S. I’d been aware of it happening in Europe, and when I saw it was coming to the U.S., I ditched a lot of classes, did the bare minimum of homework, squeaked by with a 2.000 GPA that quarter, but ended up being number 15 in the United States in Gran Turismo, which got me into the reality TV show. And it was through some exposure in the TV show that I was able to raise some personal sponsorship to do the 2012 IMSA GT3 Cup Challenge.”

Johnston dominated the series’ Platinum Cup, claiming eight wins and six other podiums from 15 races. Such domination gained the attention, and support, of Porsche Motorsport North America. So far, so good…

“Talking to people in racing, the consensus was, if you can drive a 911 fast, you can drive anything fast,” says Johnston, “and that GT3 Cup season was just a fairytale year. After winning it, [PMNA] sent me to Germany in 2013 to do Carrera Cup Germany and Porsche Supercup (below, in 2014).

“But I think I had too much confidence coming off such an amazing season, and jumping in proved to be too big of a leap, I’ll be the first to admit it. To do just Carrera Cup Germany was probably the right pace, but to go from eight weekends of racing to 15, including five in a row at one point, definitely rocked my confidence. I got off on the wrong foot and never recovered. Plus, I was teammate and close friends with Sean Edwards, who was unfortunately killed in a terrible coaching accident, and that hit me hard, too.” 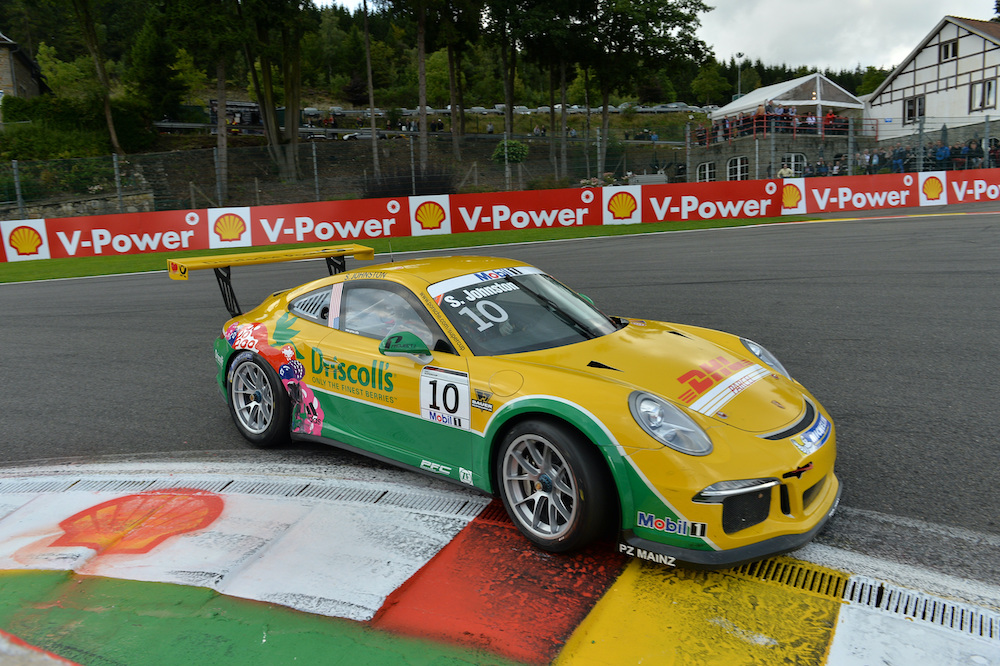 After three sapping seasons, Johnston returned to the U.S. planning on rebuilding his sports car career on home turf. IMSA Prototype Challenge outings in the 2016 Rolex 24 at Daytona and Twelve Hours of Sebring set the ball rolling, until a bereavement for his personal sponsor saw Johnston take a step back from racing – “I couldn’t keep accepting his money under those circumstances” – and, in some respects, from the wider world.

“I went and lived in a zen center in New Mexico,” he says, “which I have to say was an incredible life experience. Because the world of professional motorsports is kinda crazy, it just allowed me to reconnect with myself.”

At the end of 2017, Johnston also reconnected with his sponsor, the pair determining they wanted to do something together again. But here’s the twist…

“I wanted to go rallying,” says Johnston. “In 2015, I’d started playing Dirt Rally on my sim, having a lot of fun with it, and then I spectated on my first WRC event at Rally Germany and was just blown away by the sport, the experience and the humanity. It’s incredible motorsports, but instead of being in this sterile, contained environment, it’s out in the world, in beautiful locations.

“Plus, I was getting a little jaded with sports cars,” he adds. “When you’re so close to a good result, then get taken out by somebody trying an ‘overly optimistic’ move, that gets old. Whereas rallying, it’s all down to you. What you put in is what you get out. Here, it’s me competing against myself, and it’s this thing that Alex and I create together. The prep on the notes, the work on the driving, the commitment you bring – that determines things, rather than some crazy guy going side by side with you.