Haas team principal Guenther Steiner became an unexpected television star when his efforts to keep battling Haas drivers Kevin Magnussen and Romain Grosjean under control became one of the centerpieces of the Netflix Drive to Survive series. While the duo had a good relationship outside of the occasional clashes, the one benefit of losing the experienced, accomplished duo at the end of last season was that these moments were seemingly behind Steiner.

But with Grosjean now thriving in IndyCar and Magnussen a frontrunner in the IMSA WeatherTech Sportscar Championship, Steiner’s headaches have actually intensified with Nikita Mazepin and Mick Schumacher clashing both off track and on it. What is billed as a learning year, driving-wise – Haas is only the eighth team in the last 40 years to go into a season with an all-rookie line-up – has certainly been educational, but perhaps not in the way that was hoped.

One of Steiner’s famous Drive to Survive lines after Magnussen and Grosjean clashed on the opening lap of the 2019 British Grand Prix, a race where the priority was data gathering as the team attempted to troubleshoot the problematic Haas VF-19, was “I’ve had enough of both of you”. We don’t know exactly what he’s said in private to Mazepin and Schumacher recently, but it would be no shock were he to have reprized a stronger version of that sentiment.

Before getting into the lengthy list of incidents, let’s look back at the recent Italian Grand Prix. The Haas drivers headed into the weekend with the shadow of what happened a week earlier at Zandvoort hanging over them. There, Mazepin was furious with Schumacher for overtaking him on the out lap of their final qualifying runs, and accused him of deliberately ruining his lap. The rationale was that Mazepin reckoned he was fundamentally quicker – and it’s true his underlying pace has improved since the August break – but that as Schumacher was ahead at that point, it was a deliberate gambit to ensure he was ahead by spoiling Mazepin’s lap.

Mazepin had a point, but only insofar as the team’s communication was poor. Schumacher had asked for, and been given, permission to overtake, given his need for a faster out lap to get the tires up to temperature, but nobody informed Mazepin. The depth of the problems were laid bare by the fact that Mazepin, having been told what had happened and that if he blamed anyone, it should be the Haas team, continued to attack Schumacher.

Inevitably, the row flared up again on race day. Mazepin pulled off a superb passing move on Schumacher on the first lap. No problem there. But when Schumacher fought back heading towards the line at the end of that lap, Mazepin made a late jink to the right to block him. Schumacher was forced towards the pit entry and had to edge back to the left to avoid a bollard, resulting in contact.

In the build up to the Italian GP, both said they didn’t want to reveal the nature of the behind-closed-doors talks, although Mazepin claimed he wasn’t in the team’s “bad books” and suggested maybe Schumacher should have lifted. When the pair raced cleanly on the first lap of Saturday’s sprint race despite being in close proximity, Steiner dared to dream that lessons had been learned.

Monza only served to widen the fracture that has developed between Schumacher and Mazepin. Charles Coates/Motorsport Images

“Maybe they now think that there is nothing to gain, but just to lose for both of them,” said Steiner after the sprint race. “But if it comes from the talks or not, I don’t want to say ‘it was a good talk, now it’s all sorted’ because it could happen again. They’re race car drivers. Hopefully it doesn’t happen again, but I cannot guarantee it. You can ask them, because maybe they realize it’s better being a little bit cautious, and today they both made some small gains. So it’s fine for me what happened today.”

Steiner was right to caveat what he said, because 24 hours later, the duo had two scrapes in the Italian GP. The first came on the opening lap when Mazepin defended in the run between the two Lesmo corners, then moved to the left to take the conventional entry to the corner and clipped Schumacher, who had retained a slight overlap. Mazepin then booted Schumacher into a spin later in the race – although he did take full responsibility for his mistake afterwards, albeit mentioning that he had been caught out by Schumacher braking early. Schumacher largely remained diplomatic at this point.

All of this followed a year of incidents between the pair. In Azerbaijan, Schumacher suggested Mazepin was trying to kill him when he chopped him on the straight heading for the line. In Austria, Mazepin felt Schumacher had disregarded the no-overtaking-on-out-laps rule. At Silverstone, Schumacher appeared to believe Mazepin’s incisive overtaking maneuver shortly after the pitstops was at a time when both were under instruction to protect the tires, which happened a day after Mazepin spun when he made contact with Schumacher in the sprint race. There have been endless flashpoints. The question is, why?

Given the occasional clashes Grosjean and Magnussen had in previous seasons, it’s logical to look at the common thread, which is the team. As the team principal, it’s Steiner’s job to keep the drivers in line, so should the finger of blame point at him? Possibly, but as Steiner himself has pointed out, the team’s situation is a powerful factor, and it’s important to note that the team boss can only do so much.

Since the start of 2019, Haas has struggled. That season, a fundamental aerodynamic problem led to a problem of the rear aero stalling in medium-speed corners, which accelerated the tire degradation. This problem was exaggerated by a major upgrade package at the Spanish Grand Prix, and took a long time for the team to diagnose. While that was fixed for 2020, there was still an under-powered Ferrari engine and the COVID-19 pandemic, which forced development work on the car (some of which was completed but never manufactured), to be suspended due the economic uncertainty. And with the all-new technical regulations coming in for 2022 and the limited upside of this year’s car, the 2021 car was simply adapted to the minor rules tweaks and has remained unchanged for this season.

When there’s so little to fight for, with Haas not having scored a point in the last 20 races, all there is left to battle is your teammate. While the Grosjean/Magnussen flashpoints were a concern, they didn’t occur with the frequency of the Schumacher/Mazepin ones, suggesting this year’s situation is at another level. 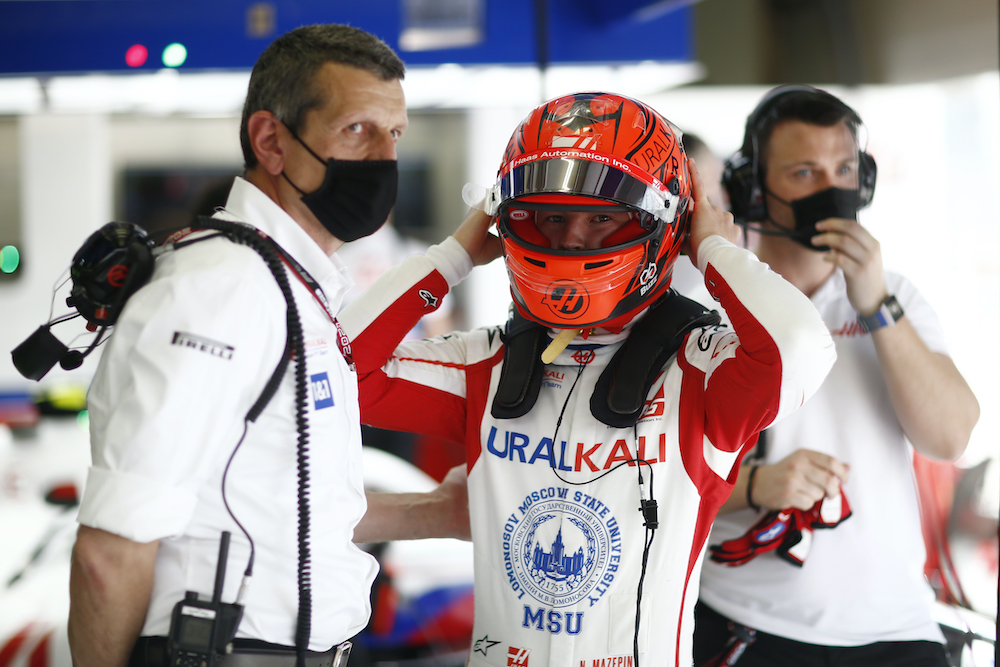 Mazepin’s father owns the team’s primary sponsor, but Steiner insists there is no conflict of interest. Andy Hone/Motorsport Images

There are also political problems. Mazepin’s place at the team is owed to sizeable income from Haas title sponsor Uralkali – run by his father, Dmitry. Steiner has consistently shrugged off any suggestions this has created a conflict of interest, although the fact Mazepin has been the more fractious of the two drivers makes it difficult to imagine this hasn’t been invoked behind the scenes. Equally, Schumacher is contracted to engine supplier and Haas technical partner Ferrari, and there has been lobbying to switch him to fellow Ferrari customer team Alfa Romeo for 2022.

But with Schumacher set to stay on – although that is still not officially confirmed – this does appear to be a long-term problem. This means there are two ways this situation could go in the future.

The first is that Haas is more competitive next year, Mazepin and Schumacher have more midfield rivals to race against, and therefore they cross swords less often. While this might seem unlikely given the team’s recent travails, it’s worth remembering Haas finished fifth in the championship in 2018 despite having produced what was, on average, the fourth-fastest car. So it does have the pedigree to be more than a backmarker.

The second possible scenario is that Haas keeps having problems, regardless of where it is in the pecking order. Given that the most that has been at stake so far has usually been positions in the mid-teens, with the best result having been a single 12th place for Schumacher at a Hungarian Grand Prix that featured six early retirements and a disqualification, things might potentially get even worse if points are up for grabs.

Realistically, it’s down to the drivers. Situations like this are never exclusively down to one individual, but while Schumacher will have played a part, it does appear Mazepin has a larger share of the responsibility. What happened at Zandvoort, where he went after Schumacher following qualifying even when it was clear permission had been given to overtake on that fateful out lap, makes that very obvious.

Both drivers are trying to prove themselves, and Mazepin is the one who has the more to prove given that Schumacher has been the better performer during the season so far. But Schumacher has actually made more significant mistakes, with crashes in Hungary and Monaco keeping him out of qualifying on both occasions, and Mazepin’s pace has improved since the summer break. If anything, Mazepin’s aggression is shrouding his improvement.

Mazepin has credited a switch to a brand-new chassis at Spa for his upturn in performance. Haas carried over its two remaining chassis from 2020 (the third was destroyed in Grosjean’s monstrous Bahrain shunt), meaning there have inevitably been some repairs made for wear and tear. Interestingly, Mazepin himself and the team seem to disagree about the impact of this – another piece of evidence that all is not smooth with that relationship.

It’s inevitable that two rookie drivers with nothing to fight for beyond beating each other will have some fractious moments. But what’s happened at Haas, with the pair apparently barely talking to each other of late, has gone too far and is counter-productive for a team that’s already having a trying season. Mazepin, in particular, would be better off focusing on himself to ensure the recent signs of improvement translate into result.

Steiner will doubtless do what he can to keep them in line and prevent further disruption to the team’s season. But as the saying goes, you can lead a horse to water, but you can’t make it drink. The best chance of the situation being resolved is the recognition by both drivers that this cannot go on.