Home / Racing / INSIGHT: How WTR is unlocking the full potential of Acura’s DPi

Acura’s former IMSA partners at Team Penske made fast work of developing the new ARX-05 DPi as it prepared for its 2018 debut in the WeatherTech SportsCar Championship. Working in concert with Honda Performance Development, the ARX-05, with its chassis built and supplied by ORECA and powered by a twin-turbo V6 engine produced by HPD in Southern California, showed immense potential during its first season.

A win by Dane Cameron and Helio Castroneves just four races into the 2018 season gave a glimpse of the car’s potential, but Cadillac and its DPi-V.R were dominant as the Michigan-based brand was victorious at 40 percent of the events. One of the lingering issues that was spoken of with the ARX-05 that year – and even through 2019 and 2020, when Acura Team Penske took command of DPi and won back-to-back titles – was found at the back of the machine.

Despite being wrapped in quality rubber from Michelin, the Acuras had a familiar story arc arise at too many rounds where, due in part to the car’s natural tendencies and the frequent application of balance of performance penalties, the ARX-05s were prone to wearing out their rear tires before they needed to pit for fuel. Race after race, the comments — often shared in private — spoke to the car’s blinding initial pace and eventual loss of speed as the tail started to wag the proverbial dog.

It was here where Acura Team Penske and HPD invested heavily in time and money to find cures that would make the ARX-05s more consistent performers during every stint. And while gains were made, near-perfect chassis setups were often elusive and the cars remained tricky to drive.

Even with the aforementioned challenges, and the pair of championships in hand, the quest to continue improving the ARX-05s continued as Acura shifted its program from Team Penske to Wayne Taylor Racing and Meyer Shank Racing for 2021. Of the two single-car teams, WTR has taken the baton from Penske and elevated the ARX-05 to new heights, earning three wins in its first season with the car, including the Rolex 24 At Daytona, which eluded Acura since it entered DPi.

The Acura Team Penske Acura DPi was no stranger to finding Victory Lane, but tapping into the full potential was difficult due to rear grip issues. Jake Galstad /Motorsport Images

The one constant between ATP and WTR has been reigning DPi champion Ricky Taylor, whose renowned racecraft is matched by an uncanny set of chassis development skills. Coming off WTR’s latest win last weekend at WeatherTech Raceway Laguna Seca — from pole — in the No. 10 ARX-05 with Taylor and Filipe Albuquerque at the controls, the state of happiness with the car between the American-Portuguese combo spoke to how far it’s come this season.

“I think we did have a great starting point at the beginning of the year; there was quite a bit of information shared from the previous program,” Taylor told RACER. “And I think that a lot of it comes from the respect that everybody in the Wayne Taylor Racing organization has for what Team Penske did with these cars. You have to treat it with respect.

“I also know our team worked really hard over the off-season to learn about this car and see where we could continue advancing it. And they’ve actually evolved the car this year. In fact, when you look at the task of the Rolex 24, that was just proof of the level of preparation that the team puts together doing all the little things right. One thing about the Acura is, it’s about the details.”

WTR learned one thing early on with the ARX-05: By dedicating more time than usual on the chassis setup pad and chasing absolute perfection with every suspension adjustment, aerodynamic change, and drivetrain tweak, the car would reward its drivers with greater handling consistency. Finding the optimal chassis setup window has always been a proper hunt for the ARX-05’s operators, and in the first of WTR’s educational moments with the car, extra time on the pad has delivered extra performance on the track.

“It’s fractions of millimeters that we’re working in with some of the adjustments, and normally, you don’t give the mechanics enough credit for how finely they set the cars up,” Taylor said. “But the Acura really wants the setup to be so precisely done to get the most out of it. And it’s how they install things and how they set the car up where a team of this caliber makes a difference. I’m not saying that it wasn’t happening in the previous Acura program, but I am saying that there may be a reason why we’re able to pick up working with a new car to us, and run it at such a high level.”

Although Taylor wouldn’t be drawn on the exact details of where WTR and HPD have improved the rear of the ARX-05 to alleviate its high tire consumption habits, the 32-year-old acknowledged this is the second big area where the team has improved the car from his three seasons with ATP. 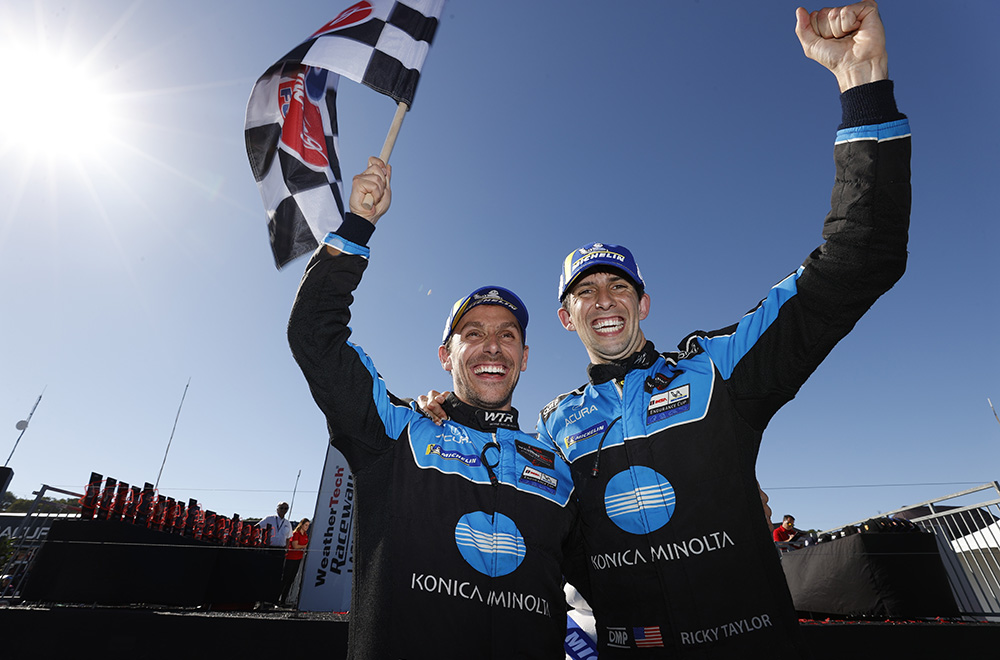 Winners of the last two visits to Laguna Seca with Penske, Taylor says WTR’s victory for Acura on Sunday confirmed the advancements they’ve made with the ARX-05 this season.

“It’s the biggest thing that we’ve done,” Taylor said. “And I think Laguna Seca is probably a good example. Although we were on pole, this is a track that favors the Acura where it will take as much downforce as you can put on it for those few laps in qualifying. But in the race, when we transition to a race setup, the Cadillacs were right there with us on ultimate pace. But it was the stint performance that made the difference, which is something we never saw when (Acura Team Penske) won there in ’19 and ‘20.

“And it’s the same car, the same track, the same competitors we’re up against, but I think the engineering philosophy behind the Acura changed. I think we just took a different look at the same problems and took some fresh perspectives. We know now how to get the ultimate pace in qualifying and for the entire stint in the races, and Laguna showed to us, or maybe more to me, how far the car has come since Helio (Castroneves) and I won there last year. It makes you really proud of all the engineers and mechanics who’ve taken a car they’d never seen before, and taken it to the next level.”

Taylor, Albuquerque, and the WTR team have a decent lead in the DPi championship standings as IMSA heads to Long Beach for the category’s penultimate round on September 25. After Long Beach, the title will be settled on November 13 at Petit Le Mans in Georgia, where WTR will look to earn its first championship since Taylor and his brother Jordan captured the inaugural DPi crown in 2017.

To do so, their engineering group will need to continue calling for the right changes on a complex prototype.

“We’ve been able to take that next step of making the Acura work over long runs, but it’s a really interesting puzzle,” Taylor said. “It’s not just like one change will put the car in the window; it’s interesting how it works in packages. It’s like, you can’t just make a weight distribution change, or you can’t just make a (differential) change and get it there. It’s looking at how one thing goes with another, and then there’s another thing to do at the same time, so you can end up with chunks of changes all at once, which isn’t really how you go about making setup changes with most cars I’ve driven.

“But that’s what the Acura likes, and so that’s what our team has put a lot of energy into understanding the setup change packages and what combinations of changes go together best. It’s taken a while. We weren’t there at Daytona, not at all. Even by Detroit, we were still getting on top of things. But by Watkins Glen, Road America, and now Laguna, I feel like we’re really gaining some momentum.

“Historically, Long Beach has been a Cadillac track. But in the back of our heads, we’re wondering if it might be a little bit different this year. It’s Acura’s home race, so that’s a big one for us to try and get for them. Hopefully, we can take what we keep learning about the Acura and maybe turn Long Beach a little bit more our direction.”