When it comes to Formula 1’s pecking order, who knew that keeping more stuff the same would make it so confusing to understand?

To be fair, perhaps I should have seen this coming. With just three days of pre-season testing there was always going to be a different shape to this weekend, but so much of the cars had been carried over from last year it felt like there would be a clear picture emerging by the end of three days, After all, we can normally tell the competitive order at any track during the season simply based on the two Friday practice sessions.

But with sandstorms, high winds and both day and night conditions, Bahrain threw up a number of different challenges and anomalies over the past three days that has left even more question marks than usual.

Or as one team engineer put it: “There’s no evidence to prove or disprove (the order at the front). It’s not a number, it’s a feeling…”

And the feeling is, Mercedes is set for a genuine challenge from Red Bull based on this, err, lack of evidence.

The bit on Red Bull’s part is obvious. Max Verstappen jumped in on day one and duly went fastest while also posting the highest mileage. Combining reliability and speed is certainly not a bad thing, especially from the start of a shortened test, and he backed it up with another quickest time on Sunday when he next drove the car, taking over from Sergio Perez at lunchtime after his new teammate had — you’ve guessed it — gone quickest in the morning.

And while this was happening, Mercedes faced a slightly different picture. A gearbox issue on the first morning was far from ideal, but also not something that could trip up such a dominant force when there’s a 23-race season ahead. But it was the struggles once the car did run that were more telling.

The car was not planted, and not running metronomically like we’re used to seeing. Plenty of winters have seen Mercedes pounding round for lap after lap, achieving huge mileage while never showing pace. On this occasion, the team wasn’t getting the mileage, and the pace wasn’t there either.

Neither Hamilton nor his Mercedes team looked in their customary commanding position during testing. Mark Sutton/Motorsport Images

That was actually most evidenced on Sunday afternoon, when Verstappen set the benchmark and Hamilton was over a second further back on a softer tire compound. There was never a Mercedes sector that caught the eye in a good way, but Red Bull appeared to keep finding time as it made changes to the car.

And two moments in particular summed it up, as Verstappen — on the medium C3 tire — ran properly wide at Turn 11 when on a flying lap and still managed to go quickest at the time with a lap that could have been comfortably faster, while Hamilton spun out of the final corner trying to start a lap on the softest tire.

This looked like a Mercedes with a genuine headache, and while Hamilton wasn’t willing to call Red Bull the favorite, his team’s trackside engineering director Andrew Shovlin certainly was.

Raikkonen on Sainz clash: ‘I guess he was pissed off’

“We’ve made a bit of progress with the balance on higher fuel and the car was more predictable but we can see from the data we’ve collected over the last few days that on race pace, we’re not as quick as Red Bull,” Shovlin said.

“The lower fuel work was a more confusing picture — we didn’t gain enough and we need to go and look at our approach as far too many cars were ahead of us on pace today. We’ve had issues in recent years with pace in winter testing and managed to make good progress before the first race but we may have our work cut out this time.

“We’ve not got long before we’re back here for the race, so we’ve planned a program of work to try and understand some of our issues and will be leaving no stone unturned in our efforts to find some more speed over the next 10 days.”

Mercedes will at least get to run the car again before the first race as it carries out a filming day in Bahrain. That comes after question marks over its decision to be the only team not to complete a shakedown prior to the test, but Aston Martin hit both gearbox and turbo issues having carried out two days of promotional running, so there are no guarantees it would have helped.

But there are also no guarantees that the filming day will allow significant progress, given the limitation on mileage and use of specific Pirelli tires. That said, it will be just one small part of a massive Mercedes effort to be the benchmark come qualifying in two weeks. 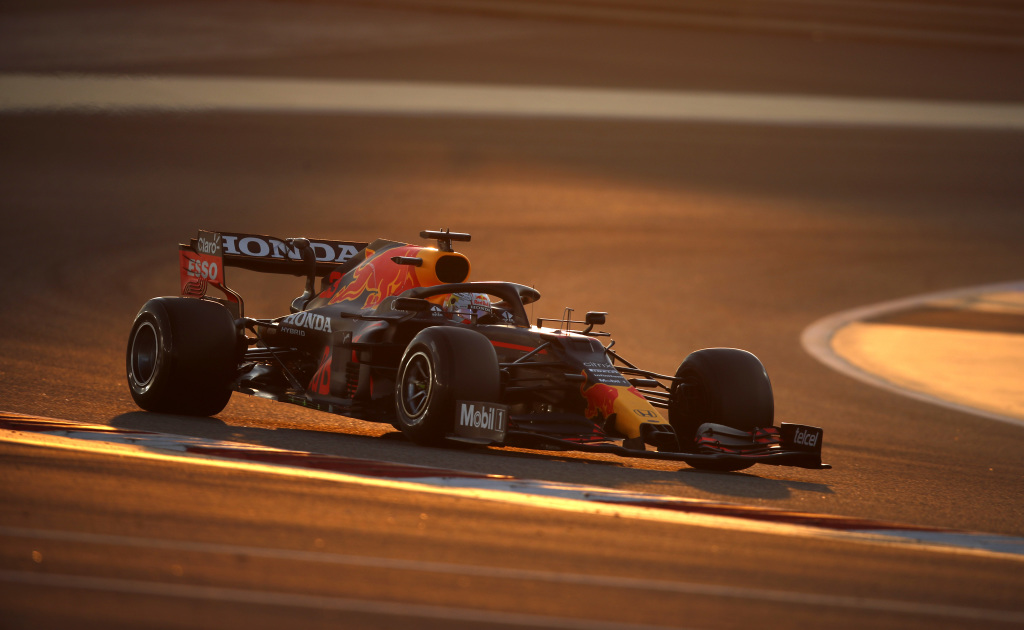 Consistency as much as pure speed throughout the the three-day test had Verstappen and Red Bull in an upbeat mood in Bahrain. Charles Coates/Motorsport Images

It’s a bit too easy (and unnatural given recent history) to not call Mercedes favorites based on the past three days, but then it’s so hard to ignore the feelings that are generated by the visual evidence.

Neither Mercedes nor Red Bull will have turned things up from a power unit point of view, but that’s where further question marks remain. There were signs of pace from McLaren in the morning when it appeared to push its Mercedes engine a little more — Lando Norris setting fastest mini-sectors on the straights — while Yuki Tsunoda was very impressive in the AlphaTauri, but basically matching Verstappen? Surely that is related to power unit and fuel load too.

And while Mercedes obviously won’t have been standing still from a power unit point of view, we know that Honda brought forward its 2022 plans to this year, so the reliability that left AlphaTauri with the highest mileage is an encouraging sign.

Make no mistake, Mercedes is on the back foot, and Red Bull is on the front foot. But there are multiple reasons why one has won the past seven drivers’ and constructors’ titles and one hasn’t. The title isn’t won and lost here and now, and Mercedes has shown it can quickly recover from setbacks in the past. But you’d rather be Red Bull than Mercedes right now.

At least, that’s the feeling.