NASCAR senior vice president of strategy and innovation Ben Kennedy believes the collaboration between industry stakeholders and fan feedback led to the creation of “what we think is ultimately the best Cup Series schedule that we’ve had so far.”

NASCAR rolled out the 2022 schedule, which includes two new stops, on Wednesday morning. The first will be the Clash exhibition race to be run on a temporary short track built inside the Los Angeles Memorial Coliseum, and then a visit to Illinois and World Wide Technology Raceway. The full schedule features 39 race events.

While WWTR is the only new points-paying race, there are notable highlights for next year. NASCAR returns to competition on Easter weekend for the first time since 1989. The event will be the second on the dirt at Bristol Motor Speedway, and that race is moving to prime time.

“We learned that it’s important for us to make sure that dirt event is into the evening or under the lights, and we were able to secure that prime time window on Fox,” Kennedy says. “You think of all the other sports leagues with NFL on Thanksgiving, NBA on Christmas. This our opportunity to run on Easter Sunday and drive a lot of momentum for fans who are watching at home through Fox’s season and NBC’s season, from start to finish.”

The inaugural Bristol dirt race earlier this year was rained out and pushed to Monday. It was well-received, but there were lessons learned with tire wear and visibility issues. Moving the race to prime time should keep the surface in better racing condition, which in turn should help with better visibility.

Pocono was the only track to lose a race. For the first time since the early 1980s, it will not host two Cup Series dates. While acknowledging a race had to come from somewhere to provide for the addition of WWTR, Kennedy praised the partnership between NASCAR and the Mattioli and Igdalsky families that own the Pennsylvania track.

“We look forward to having them on the schedule in 2022,” Kennedy said.

A significant change is that teams will only have one off weekend next year. That will be after the June 12 race on the Sonoma road course. There have routinely been two weeks off during the Cup season for Easter and then one in summer. This year added one more because, in addition to Easter, NASCAR went on a two-week summer break in August to allow for the Olympics.

“It’s something that we’re certainly looking at, and (we) know it was nice to have the two-week off week with the Olympic break, and I think it was a natural break for our season this year,” says Kennedy. “That said, if you look at our schedule overall, starting on President’s Day weekend as we traditionally have with the Daytona 500 and ending our season at Phoenix with the championship race, by the time you lay out the entire schedule, really ultimately, it leads to only one off week if we’re running on Sundays and weekends.

“With that said, we felt it was important, especially for our fans that are sitting at home watching the event or coming out to an event, to have a lot of momentum from the start of our season at Daytona all the way to Sonoma — where Fox will close their portion of the season — and then from Nashville Superspeedway where NBC picks us up, all the way to the championship race at Phoenix. I know we’ll only have one off week between Fox and NBC; that said, I think it’ll drive a lot of momentum for our sport and for our fans. But something we’ll continuously look at as we think about future iterations of the schedule is where those off weeks are located.”

California’s Auto Club Speedway is back on the schedule after being shuttered during the COVID-19 pandemic, which means teams will again run the West Coast swing after the Daytona 500. There are six road course races on the schedule, five of which will be during the regular season. 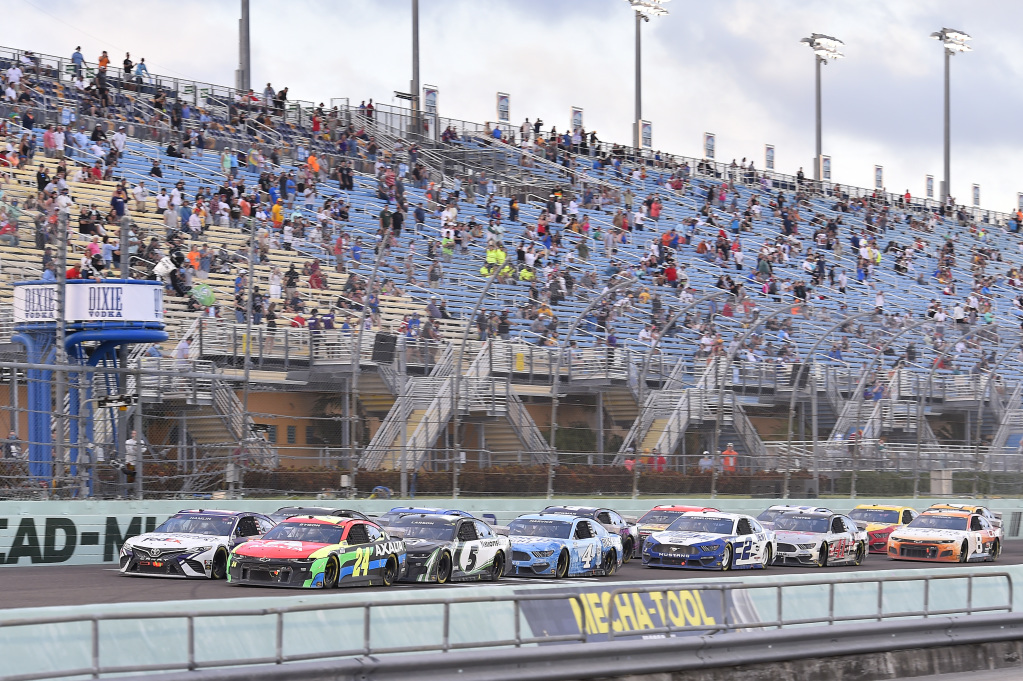 After trying a June date in 2020 and February this year, Homestead is back in the playoffs next season. Rusty Jarrett/Motorsport Images

NASCAR also shuffled dates around late in the year, such as Watkins Glen being before the regular-season finale, and Texas and Kansas swapping postseason dates. Homestead is also back in the playoffs. But the key point for Kennedy is a diversity of venues aimed at showing off the hoped-for added competitiveness of the new Next Gen race cars.

“First and foremost, the Next Gen car is not only going to bring a lot of relevance back to our vehicles, but it’s also going to create what I think is going to be the best racing product we’ll have in our sport’s history,” Kennedy says. “The cars look fantastic. In seeing some of the data and research they’ve done, the racing product will be better than ever. I think as it speaks to the schedule, we have several charts that we look at of the evolution of where we were in 2020 – the mixture of intermediates, road courses, superspeedways – to where we’re at today (with) the dirt race on the schedule, you have a handful of superspeedways, you have a handful of intermediates, a handful of short tracks… a little bit of everything.