The NTT IndyCar Series is making progress on solving the problem of rain pooling at the front of its aeroscreen.

Highlighted as an issue in the latter stages of May’s rainy Indianapolis Grand Prix, a number of drivers described an odd aerodynamic phenomenon where the heavy downpour on the run to Turn 1 produced a sizable bubble of water that sat directly in their line of sight and refused to dissipate until they drove away from Turn 1 and reached areas with lighter rainfall. Returning to Turn 1 on the next lap would cause the phenomenon to happen again, and again.

With the onrushing air pinning the mass of water to the face of the aeroscreen on approach to Turn 1, some drivers — in particular, those running close to each other — said they were all but blind as a result of the bubble and resorted to looking out of the sides of the cockpit as a temporary workaround.

According to Tino Belli, IndyCar’s director of aerodynamic development, the process of identifying the source of the issue and finding a solution to prevent the problem from recurring has been in play for months with support from Dallara, IndyCar’s official chassis partner.

“After the GP, we talked with Dallara about whether windscreen wipers could work, which they said was impossible for a number of reasons,” Belli tells RACER. “One of them is the shape, but it’s not only the shape; we’re short of electricity and we’re very short of space. We also invited Honda and Chevy into solving this problem with us and Dallara ended up doing most of the work.

“So what they wanted to do was to look at this bubble of water on the aeroscreen in CFD (computational fluid dynamics), and no one had ever done this before. Both Honda and Dallara use ANSYS (software) for their CFD and they presented this possible way of checking whether we could see what’s happening through a technique of placing a five-millimeter thick water film onto the aeroscreen and then blowing the air over it virtually.”

Before fixes could be sought, Belli and Dallara needed to understand how the 5mm layer of water was being affected by the airstream flowing over and around the aeroscreen. Using the virtual model of the Dallara DW12 in CFD, baseline tests were run to determine the water film surface velocities across the face of the aeroscreen.

Rendering of the baseline water film test which revealed the source of the pooling issue. Image courtesy of IndyCar/Dallara

Those initial runs revealed slower air speeds were present in the middle of the aeroscreen — right in the area where drivers complained about the bubble of water — while higher speeds were found outside of the bubble, which helped to clear the water away from the surrounding areas. In the blue areas, the water film was shown to be on the lower end of movement by the airstream, somewhere at or below five meters per second.

Lighter and darker shades of green were more promising, with the water surface velocities registering in the range of six to seven meters per second, and in the yellow and red, the speeds increased to eight to 10 meters per second. The baseline runs created a clear path to rectifying the pooling problem: Make aerodynamic changes somewhere on the chassis — ahead of the aeroscreen — and possibly to the aeroscreen itself that will raise the airspeed in the middle of the device.

In simpler terms, Belli, Dallara and Honda were tasked with turning the slower blue and green areas into yellows and reds.

“The blue ones were something like 4.95 meters per second. And then as you go around the site where it gets greener, and then yellow, you see the speed of the water film speeding up,” Belli says. “That told us that we can see something and we could quantify it. And we’d also been looking into ventilation.”

Heading into the new season, IndyCar teams will continue to use the same aeroscreen model that was introduced in 2020 before a new and lighter version will be introduced in 2024. A thinner, lighter polycarbonate screen from PPG has been in development and a lighter titanium frame — the halo — is also in the works from Pankl that uses a new manufacturing process that, when combined with the new screen, is expected to carve 10 pounds from the unit.

The development of the aeroscreen 2.0 has also allowed Belli to try both virtual and real-world tests aimed at improving cockpit cooling and ventilation that, in turn, have given some direction on ways to improve air speed in the problem area found in the water film CFD experiments.

“The thought is for when we do the lightweight windscreen, we wanted to gather data on places on the aeroscreen where we might increase cockpit ventilation,” Belli says. “We tried some things during the March 29 2.4-liter (2024 engine test on the IMS road course) with Scott Dixon where we cut some apertures in the screen in areas that wouldn’t diminish its safety in any way and had Scott give us feedback on what he felt worked the best.

“The was a rectangle we cut near the base of the aeroscreen where the 4.95 meters per second happened to be, and he said he could feel that considerably more than most of the other holes.”

In modeling the various holes, rectangles, and slits cut into the aeroscreen for the CFD tests, Dixon’s favorite one near the base of the aeroscreen also helped to improve air speed. Virtual vortex generators were tried along with numerous iterations that are currently being evaluated. 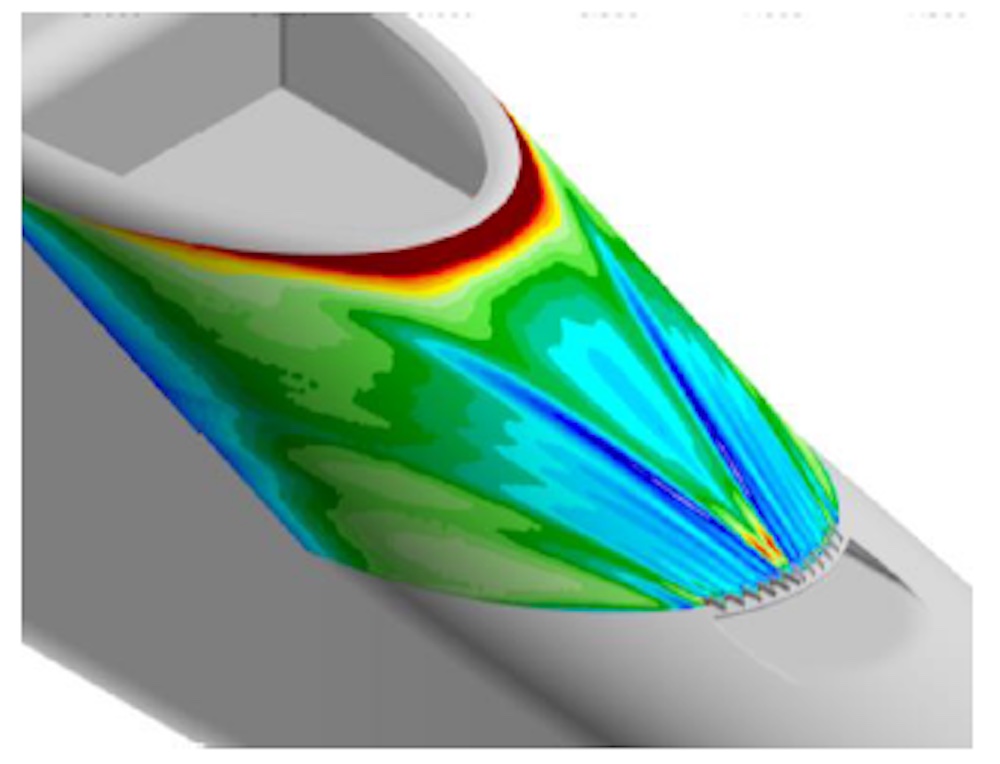 Although the striations created by the introduction of vortex generators look cool, the rain vision problems were exacerbated as the central pool turned into warped slivers water moving at different speeds. Image courtesy of Dallara/IndyCar

Altogether, 22 significant solutions to resolve the water bubble issue have been run in CFD. Those findings went into a 39-page report for all parties to review, and as expected, many of those 22 ideas were tried and found to be unsuccessful. The most impactful concepts went forward for further testing that have helped the series to find answers that are likely to be implemented in 2023.

Separate from any aeroscreen venting that might be done in the future, Dallara and the CFD team fashioned a small pair of virtual curved vanes that sit atop the shock cover which have done wonders to accelerate the air and aim it right where it’s needed as it hits the aeroscreen at something close to 10 meters per second. From all the concepts that have been tried in CFD, the shock cover vanes are the leading solution to resolve the water pooling issue.

“We’ve also looked at, only in CFD, what the aerodynamic effects are like for how much downforce you lose, how much drag you gain,” Belli says. “And remember, this is only for the road courses where we’re in higher downforce configurations. The changes are pretty small. If we did implement what we’re looking at, it would be the same for everyone.

“From the CFD figures, you’d lose nine pounds of front downforce, you’d lose six pounds of rear downforce. and your overall (center of pressure) balance changes by 0.1. So it’s pretty negligible at a 14-pound downforce loss with no drag change and a very slight change in balance. So that’s where we’re at right now. And Dallara is making a pair of the vanes for us to see in person.” 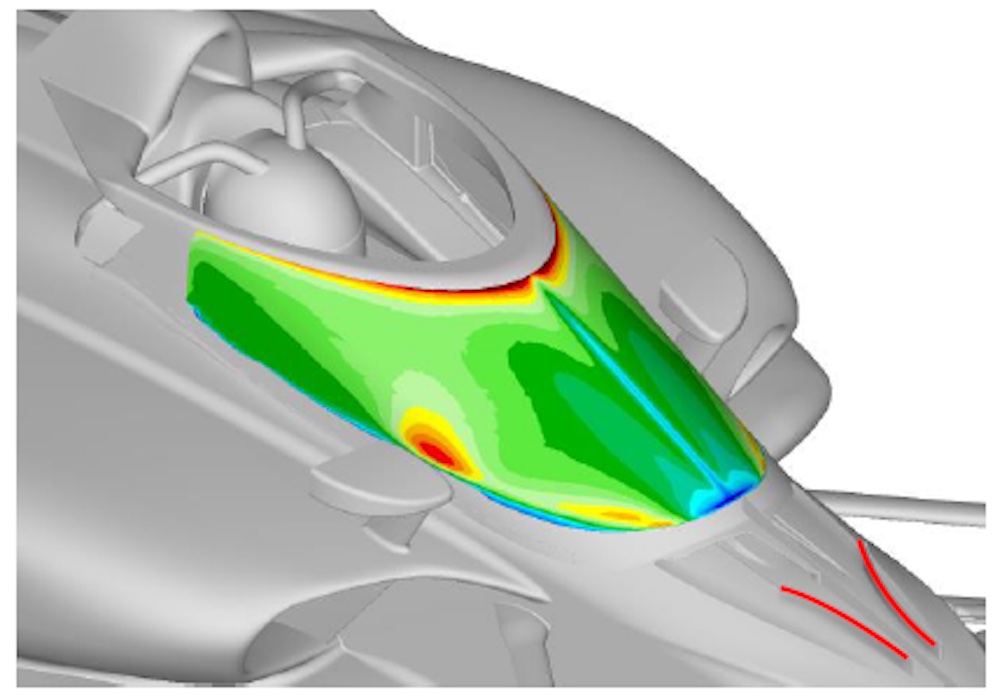 A look at the turning vanes — in red — atop the shock cover during one of the early CFD tests where optimal air speeds had yet to be discovered. Image courtesy of Dallara/IndyCar

More testing needs to be done before IndyCar is ready to commission Dallara to manufacture 60 pairs of vanes for paddock-wide use in 2023, and if all goes according to plan, the proof of concept will be done outside of CFD.

“At the end of this process, you’ll see that we are trying to see if we can actually take this to a wind tunnel with water,” Belli says. “That’s a completely new phenomenon. So lots and lots of configurations we’ve gone through to get close to what could be the answer, and now we’re starting to narrow it down.

“The next step is to try and find a wind tunnel where we put a camera inside the cockpit and take a driver with us for the test and spray water at high speed at the car. It’s not as easy as it sounds, because nobody’s ever really done this with an IndyCar fitted with a screen. So we’re working at the moment with Honda and their new Halo tunnel in Ohio about possibly testing this with water.”

A final call is expected to be made by IndyCar in December regarding how the aeroscreen water bubble solution will move forward. Input will be solicited from its team owners and team managers on whether the vanes and any other fixes should be made mandatory at every round, or installed and later removed after wet road and street course sessions are experienced.

“We’ve got to massively credit Dallara for taking the lead on this and putting in an extensive amount of time and resources to get us to where we are right now,” Belli says. “And Honda, which has been increasingly supportive of the project. Many months have gone into creating the 22 configurations and both Dallara and Honda deserve the lion’s share of credit for advancing this towards a solution.”