From the long track layout to the legendary concession stands (Double Brat Egger, anyone?) Road America, the host of the IMSA Fastlane SportsCar Weekend, is always a favorite of drivers and fans. For the drivers in the IMSA Weather Tech SportsCar Championship, where all classes will be in action this weekend on the 4.048-mile, 14-turn road course known as “America’s National Park of Speed” for a 2h40m race, the long straights make traffic less of a problem, and the fast nature of the circuit is welcome as well.

“Road America is perhaps one of the nicest tracks for any racing driver,” says Pipo Derani, the defending DPi champion still looking for his first victory of 2022 in the No. 31 Action Express Racing Cadillac with Olivier Pla. “It’s very, fast, very technical as well, and presents a big challenge for the teams to be able to do a perfect setup.”

And when the setup is good and the drivers nail their marks for each section of the track?

There are a few things that make Road America a unique challenge. The first is that it’s the longest circuit on the WeatherTech Championship schedule. The second is the variety of corners. On paper, the track has a lot of near-90-degree bends; but each of those is somewhat unique in character, ranging from fast turns to slower corners like Turns 6 and 8. And while the long straights alleviate traffic concerns, the long, fast Carousel exacerbates them. Finally, there’s the tire degradation, which can be high at Road America, but isn’t as predictable as it is at some other circuits.

“I think Road America will be interesting,” says Bryan Sellers, driver of the No. 01 Paul Miller Racing BMW M4 GT3 in GTD with Madison Snow. “I think it seems that it’s a track that’s changed a lot over the last couple of years in terms of grip levels, tire degradation. And some of the reports we’ve heard this year is that it’s it’s even kind of worse than it has been in previous years. So I’m not sure how it will all unfold.”

Antonio Garcia, driver of the No. 3 Chevrolet Corvette C8.R in GTD PRO, echoes those concerns. He and Jordan Taylor are looking for their second victory of the season for Corvette Racing, having last won at the Twelve Hours of Sebring. Like Sellers and the other BMW teams coming to the circuit with a new car that has yet to be tested by Road America, Garcia and Taylor face an additional challenge in that their mount is in a rather different configuration than the last time they raced the circuit in the GTLM category.

“This will be a little different Road America than we’re used to with the GTD Corvette and the cars we are racing now — both GTD and GTD PRO,” Garcia says. “You have to think about attacking the track in different ways given weight, power and other differences that are part of the GTD configuration vs. GTLM. We also don’t know about tire degradation, which was quite severe there in past years. We don’t know how it will be this year on this tire but it can open up several different strategies for the race and can play a big role in the outcome. So we’ll see.

“One thing that hasn’t changed is how enjoyable it is to drive around Road America and in the area. It’s a highlight visit every year, but hopefully this year that includes a good result or win for us.” 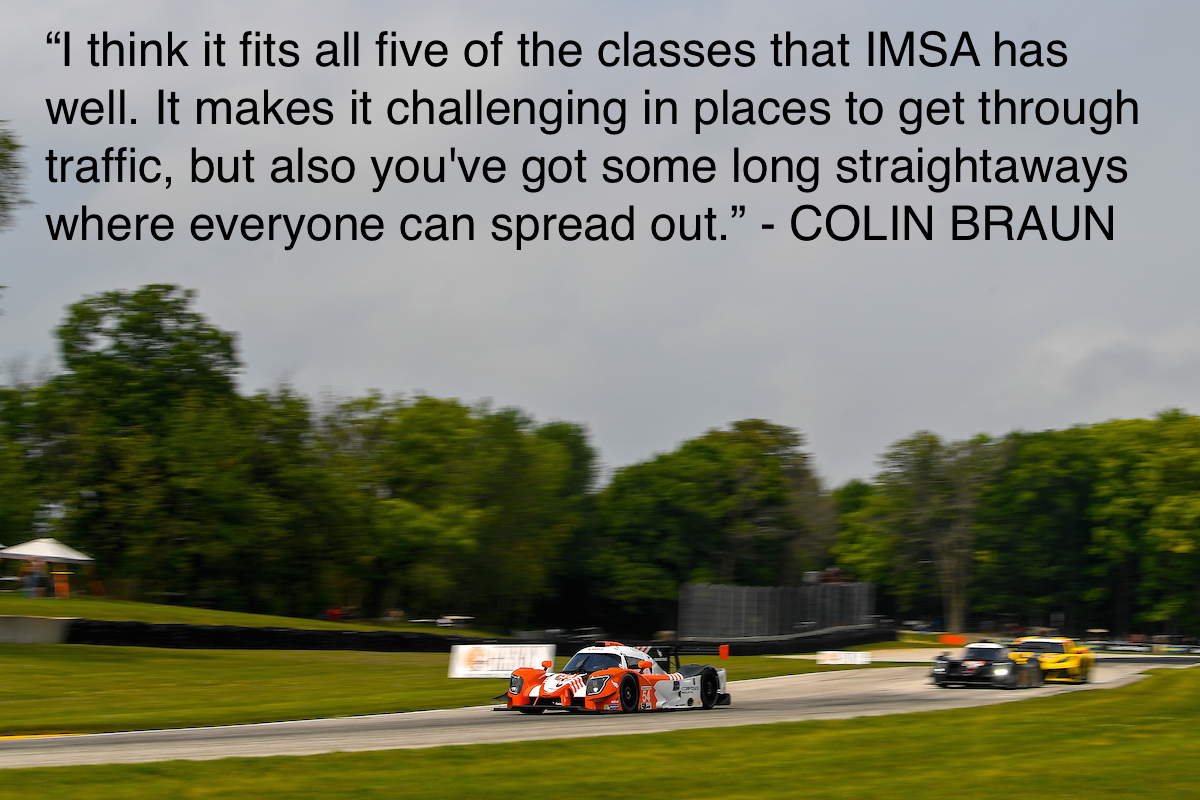 Sellers and Garcia will be part of the traffic — along with drivers in the LMP3 and LMP2 classes – that the DPi drivers such as Derani and Bourdais must contend with. While on most of the circuit, slower cars can be dealt with swiftly, there’s one place a driver definitely doesn’t want to catch a slower car.

“The difference in speed [at Road America] is perhaps a bit higher than the others,” explains Derani. “For example, if you take Mid-Ohio, or even Laguna, the difference between a GT or a P3 to a DPI is not as big as as Road America. That makes it very interesting as well for us, approaching them sometimes at speeds that it’s even shocking for us inside the car. You have the kink, and you look at the car from afar, and you think it’s this far away from you. But very quickly, you’re already right behind them. So it’s an interesting place in that regard.

“You have quite a lot of space to overtake, especially with the straights; but then you have a very tricky corner, which is the Carousel, that if you catch GT or a P3, there is a massive difference and you end up losing a lot of time. As the race progresses, perhaps you can be a little bit lucky and get the other guys on the straight. But if you’re not that lucky, and you get it right before the Carousel, then then you’re stuck for a long, long time.”

Fans might get stuck for a while in the concession lines, and could even find themselves, like Derani, stuck behind an LMP3 driver.

“I think my favorite thing might be hitting the concession stand there at the racetrack, the food is so good,” says Colin Braun, who, with Jon Bennett in the No. 54 CORE Autosport Ligier, has a fairly solid lead in the WeatherTech Championship LMP3 standings. “I love it up there. My dad and my mom are from not far from the area, so a lot of friends and family that’ll be coming out. Certainly one of my favorite tracks to go to on the schedule, for a lot of those reasons but also it’s just an amazing facility. Really fun whether you’re in a GT car, DPi car, P2, P3… it’s just a great, great track.

“I think it fits all five of the classes that IMSA has well. It makes it challenging in places to get through traffic, but also you’ve got some long straightaways where everyone can spread out and make it a little bit easier for the different groups to to get through.”

There are 37 cars entered across five classes for the race that will start at 11:40 a.m. Eastern on Sunday, part of which will be broadcast live on USA beginning at noon Eastern. The WeatherTech Championship will be joined this weekend by the Michelin Pilot Challenge, which contests one of its two four-hour races for the season; the Porsche Carrera Cup North America; and Lamborghini Super Trofeo.