Race day at the GMR Grand Prix, go inside the action and ride along with your favorite NTT IndyCar Series drivers on the INDYCAR Mobile App Powered by NTT DATA.

Saturday’s race has 13 drivers carrying onboard cameras for the 85 laps of Indianapolis Motor Speedway’s 2.439-mile, 14-turn road course, and you can live-stream all of them.

Think Barber winner Pato O’Ward’s will make it two wins in a row? Then climb aboard. Or could 2021 GMR Grand Prix pole-winner Romain Grosjean take his first IndyCar race win? Ride along and find out. Or how about strapping in with Graham Rahal for one of his trademark charges through the field? That could be a wild one.

And did we mention that it’s free? If you haven’t already, find out how to download the INDYCAR Mobile App here.

The 13 drivers to ride along with in the GMR Grand Prix are:

The breakout star of the season so far. Took his first NTT IndyCar Series win at the St. Pete opener, and sits only three points off the championship lead. Qualified fifth for last year’s GMR Grand Prix, so could this be another big weekend for the Penske sophomore?

After winning at Barber (below), he’s looking to back it up at on the IMS road course. It’s a place that hasn’t been kind to him, but when you’re on a tear, confidence can do the rest.

He’s yet to post a top-10 finish this season, but the Swede has been a Firestone Fast Six qualifier for the last two races. Is the IMS road course the place he puts it all together?

The reigning NTT IndyCar Series champ leads the 2022 points after three podiums in four races. No wins yet, but the GMR Grand Prix would be a good place to start.

Will Power, No. 12 Team Penske Chevrolet, carrying the Verizon onboard camera.

With five wins and five poles on the IMS road course, Power comes in to the weekend as the favorite. A super-consistent start to 2022, never finishing outside the top four, sets him up for another big one at his favorite road course.

Practically lives in the top 10 at the IMS road course. Made a habit of qualifying low, then racing through the field here last year. After fireworks at Barber, will itbe payback time if he comes across Romain Grosjean?

After dominating the closing stages of last year’s NTT IndyCar Series, Herta’s yet to put a real run together in 2022. Could the IMS road course be the start of something?

Rossi’s usually in the mix on the IMS road course, and heads here after back-to-back top-10 finishes at Long Beach and Barber.

The Frenchman won the pole (below) and finished second in the GMR Grand Prix in his 2021 rookie campaign with Dale Coyne Racing, then added another second-place finish in the series’ second visit to the IMS road course. Can he finish one place better this time? 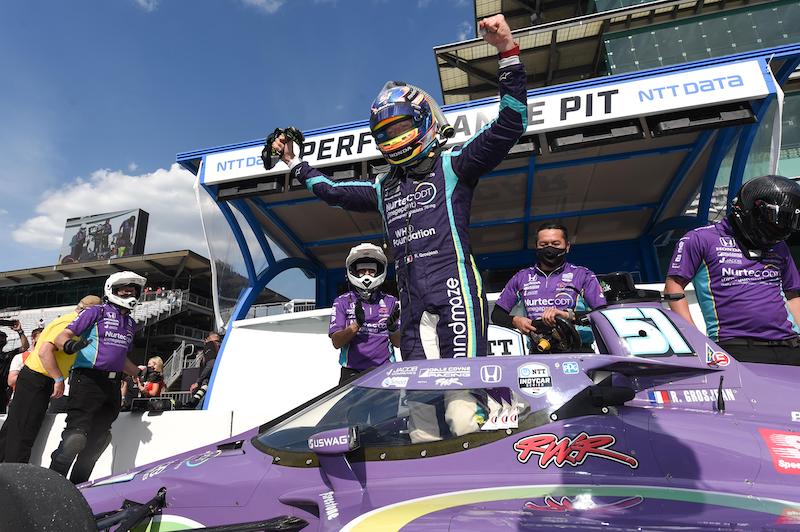 First time in an IndyCar Series car, the Dane qualified a sensational fourth on the IMS road course last year. He hasn’t started the 2022 season so hot, but the rookie could be the driver to watch on his second start here.

Scored his only NTT IndyCar Series podium in the 2019 GMR Grand Prix, and has earned IMS road course top 10s since. Will this be the weekend it all clicks for the Brit at RLL?

Still learning the nuances of an open-wheel car, the NASCAR legend and IndyCar sophomore gets quicker on every return visit to a track. This will be his third IMS road course start, so watch out for some serious progress.

Pagenaud won the 2019 GMR Grand Prix, then went on to win the Indianapolis 500. He’s not had the greatest of starts in his switch to Meyer Shank racing, but a strong IMS road course showing would get things rolling nicely.

Saturday’s warmup is at 10:30am ET, with the 85-lap GMR Grand Prix – including all 13 onboard cameras streaming live – taking the green flag at 3:45pm ET.

For the ultimate deep dive, and to choose your best seat in the house, make sure you sign up for the INDYCAR Mobile App Powered by NTT DATA, the official mobile app of the NTT IndyCar Series. It’s packed with great features, and it’s free. Don’t miss out – click here to get started.