Fifty years have elapsed since Ferrari last competed with a factory team in international endurance racing, when the 312P was withdrawn from competition after the 1971 season. Six years before that, Ferrari scored its last of nine overall victories in the 24 Hours of Le Mans with Jochen Rindt, Masten Gregory and Ed Hugus in a 250 LM.

In 2023, Ferrari will once again compete on the world sports car racing stage, entering the World Endurance Championship and Le Mans with its 499P Hypercar. Powered by a turbocharged 2.9-liter V6 with architecture common to the engine in the 296 GTB/GTS road cars, along with a hybrid system built with knowledge from the Ferrari Formula 1 team and driving the front wheels, the 499P exists because of the Hypercar regulations. Ferrari chose the Hypercar ruleset over LMDh for the the same reason: Ferrari can build the entire car itself.

“We chose this moment because after many years, the rules have changed,” declared Antonello Colletta, head of Ferrari Attività Sportive GT. “We sat at the table from the first day of the new discussion with the FIA, ACO and IMSA. And we realized that Ferrari had the chance to create 100 percent of the car with a lesser budget than the past.

“We chose LMH because for Ferrari, it’s important to make all the car and all these parts. Ferrari is a constructor, manufacturer of the cars, and our philosophy is to create the cars. This is a manifesto of the technologies of Ferrari, and for this matter, we need to create 100 percent of the cars.”

The number of manufacturers already in or coming into WEC for 2023 and 2024 was a factor as well. Toyota, Peugeot, Glickenhaus, and Alpine (currently) on the LMH side, and Porsche and Cadillac bringing LMDh cars in 2023, with BMW, Lamborghini and Alpine (with a new LMDh car) and perhaps Acura joining in 2024.

While Colletta was noncommittal on a North American program in IMSA’s WeatherTech SportsCar Championship, he notes that convergence of the rules played a big part in Ferrari’s decision, and that the 499P was designed with North American circuits beyond Sebring — home of the season-opening WEC 1000 Miles of Sebring — in mind.

The name of the car evokes Ferrari’s winning past, taking the single-cylinder displacement and using the “P” designation for prototype. The two cars will carry the numbers 50 and 51 — 50 for it being 50 years since the last Ferrari factory effort in worldwide endurance racing, and 51 that has adorned many successful Ferrari racing cars.

Drivers have not been named, but the company says they will come from the Ferrari family of drivers. Ferrari GT drivers Alessandro Pier Guidi, Nicklas Nielsen, James Calado, Antonio Fuoco, Miguel Molina and Davide Rigon have all had time behind the wheel of the 499Ps in more than 7500 miles of testing so far, with perhaps Pier Guidi logging the most mileage.

“There are brands like Toyota that are involved (for) 10 years in this kind of prototype. So we’re not stupid — we know that everyone is doing an amazing job, and it’s difficult to compete against them. So that’s why we need to push even harder than what we are doing and try to not leave anything behind.” 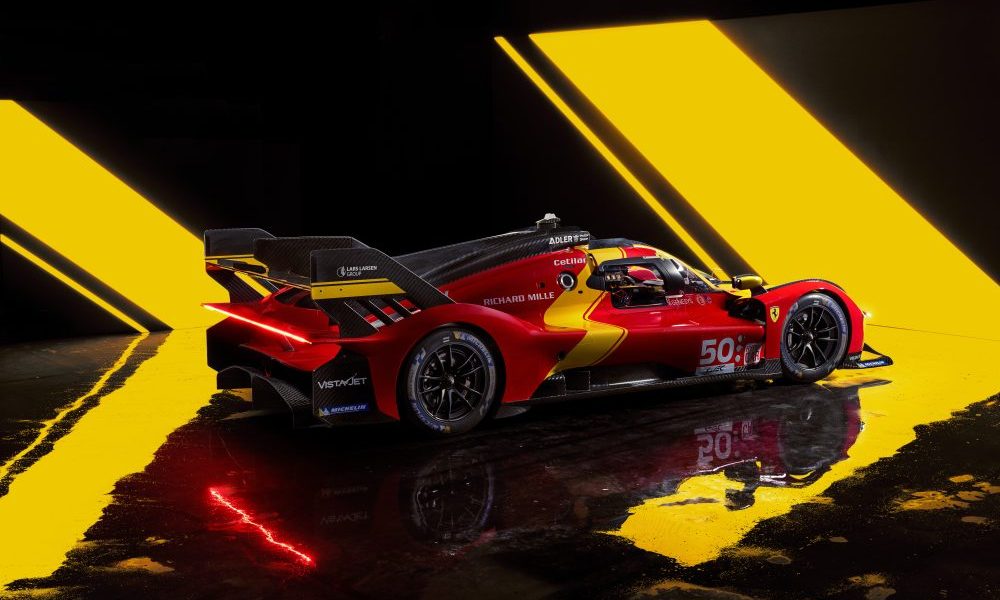 Clearly, Ferrari has no illusions about the challenge ahead of it, with Toyota Gazoo Racing having two years of development on its GR010 HYBRID and Peugeot as well beginning competition ahead of them, plus the onslaught of other manufacturers coming. However, the company is confident in its ability to make history repeat itself.

“The 499P sees us return to compete for outright victory in the WEC series,” said John Elkann, Ferrari executive chairman. “When we decided to commit to this project, we embarked on a path of innovation and development, faithful to our tradition that sees the track as the ideal terrain to push the boundaries of cutting-edge technological solutions, solutions that in time will be transferred to our road cars.

“We enter this challenge with humility, but conscious of a history that has taken us to over 20 world endurance titles and nine overall victories at the 24 Hours of Le Mans.”

The Ferrari 499P will be managed on track by Maranello technicians and engineers with the collaboration of AF Corse. The partnership continues the streak which began in the 2006 FIA GT season with the F430 GT2 that secured team, driver and constructor titles in its debut season. The vast majority of GT successes in recent years have been the result of the partnership between Ferrari and AF Corse, including all those achieved in the World Endurance Championship since its inception in 2012.

Ferrari reports that it has received a number of inquiries from potential customers for the LMH car, but has not indicated that it has any intention of the 499P being run as anything but a factory effort.

The 499P, bearing a livery with a version of the renowned 312 P color scheme from the 1970s to visually underscore the historical connection, will makes its competition debut in the 1000km of Sebring, run as part of the “Super Sebring” weekend with IMSA’s 12 Hours, on March 17. WEC will conduct its Prologue pre-season test, at Sebring the weekend before.