Ray Evernham will likely devote some of his time in the coming weeks dissecting the inaugural season of the Camping World SRX Series, which wrapped up its six-week run Saturday night at Nashville Fairgrounds.

The made-for-TV series pulled in over one million viewers and ran all six races without weather issues. It was a hit with everyone, from those competing to the ones watching. Although Evernham admitted there were things like car maintenance and travel he could have done differently, he seemed pleased with the overall presentation of a new racing series.

“The part of it I’m really impressed with is how well this team has adapted, came together to prepare our cars, and how much fun the drivers have had, which is something I was really hoping because if the drivers have fun, the fans have fun,” Evernham said. “It’s very humbling the way this has been supported by the fans. We’re big (on) social media, and you get one person on Twitter that bashes you, and you’re ready to jump off the building, but we’ve been 99 percent favorable. So that tells me we’re doing something right.

“For me, if the drivers are having fun, and I believe they sincerely are telling me that they are, we put on a good show. I feel like we’ve done a good thing for some of the short tracks across America and some of those towns that needed a little bit of an economic boost. Just the support we’re getting … telling me it’s good. I’m happy. It didn’t matter whether or not I thought it was good.”

Chase Elliott (No. 94) battled his father, Bill Elliott (No. 9) on multiple occasions before taking the victory in the SRX season finale at Nashville Fairgrounds. (Dylan Buell/SRX via Getty Images)

In a one-off appearance, Chase Elliott won the finale at Nashville while Tony Stewart earned the championship. Driver resumes for those who competed regularly ranged from champions across the racing landscape (Stewart; Helio Castroneves; Paul Tracy) to youngsters like Hailie Deegan and local stars Doug Coby, Brian Brown, and Luke Fenhaus.

“That’s something that’s humbling,” said Evernham. “That those superstars would believe in you enough to come in and say, ‘Hey, we’re going to do this deal, it’s going to be fun.’ (And for us to say,) ‘I’ll keep you safe, and we’ll keep you in good cars.’ They trust in you.

“Honestly, I don’t think that I could have had all that credibility to make those phone calls if it wasn’t for Tony Stewart being a partner because once Tony was a partner, that gave some serious credibility from the driver’s standpoint.”

The series also helped give attention to drivers looking for opportunities. Coby won the first race at Stafford Speedway and then landed a Truck Series ride for later this season at Bristol Motor Speedway with GMS Racing. Ernie Francis Jr. emerged as a star, winning at Lucas Oil Raceway, finishing second in the championship, and openly expressing his hopes of an open-wheel shot.

“That was one of those things that I was hoping and may have exceeded expectations,” Evernham said. “I know that every Saturday night or Friday night around the short tracks of America, there are guys and girls racing around that deserve to be here and are good enough to be here that either may never have gotten the shot or it’s going to be tough for them to get a shot. So, to go into their hometown and their home track and have a guy like Doug race with these guys, and they say, ‘Wow, he’s good.’ Or Luke Fenhaus, that kid made a huge impression on a lot of people. Again, the fact that we are making short track racing – I don’t want to say healthier – but at least getting people to notice that ‘Wow, I can go down the street and these are people that are good enough to race with these superstars.’”

SRX was designed to be IROC 2.0, which Evernham has always admitted. Mission accomplished in attracting drivers from all over, promoting racing across the country, and doing so while keeping the speeds down and drivers safe. 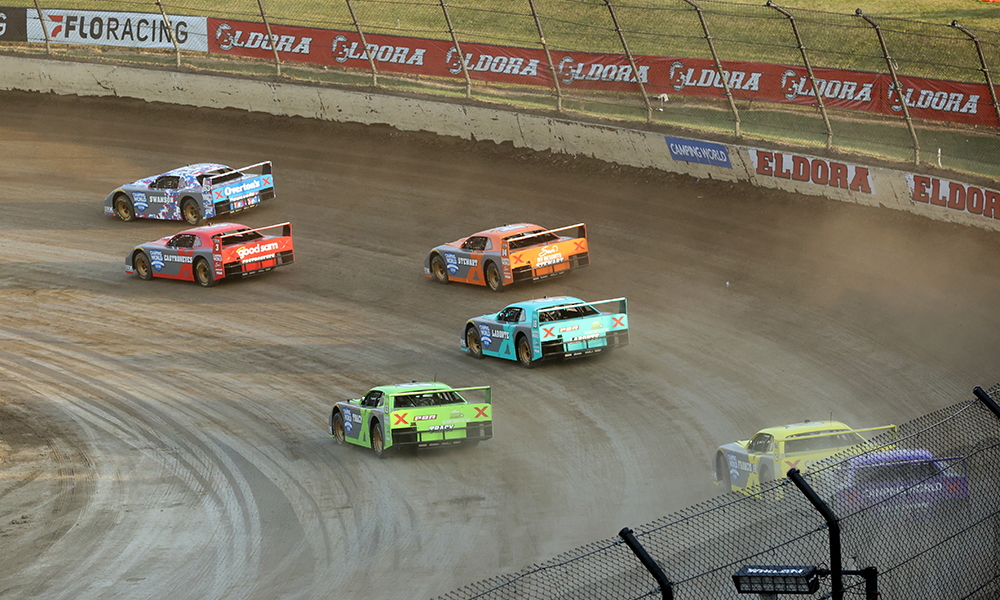 The six-race schedule featured a blend of dirt and pavement racing, only competing at various local short tracks. (Dylan Buell/SRX via Getty Images)

So what comes next? Going into next season, Evernham would like to get some drag racers on the roster and has even told Brian Deegan he needs to compete against daughter Hailie. But don’t expect the car count or the schedule length to change.

“We have to focus on entertaining the fans,” Evernham said. “And trying to run more than six races and (doing) more than 12 cars, then suddenly it comes trying to manage a race, and even though they call it a race series, this is not a race series. We’re a television show.”

Fans and television will play a part in what the track schedule will look like going forward. Evernham doesn’t want to run the same tracks each year, and he wants to add a road course or converted road course to the mix.

“So, we can give better opportunities to some of the other people that we want to bring (in); some of the F1 guys coming over and stuff like that,” said Evernham. “But how do you not go back to a place that sells out for you and gives you a high TV rating? Obviously, there will be some partner input, but most sponsors and partners are interested in TV ratings and attendance.”