Derani posted a best lap of 1m45.354s in the No. 31 Whelen Engineering Cadillac DPi-V.R, which led all three sessions on Thursday.

Taylor topped the charts briefly after reeling off a lap record 1m45.464s, before Derani answered the challenge with his pole-winner.

“This is a track that I enjoy so much, with so much history,” said Derani, a three-time winner of the 12 Hours. “Qualifying was great, confirming what we had in practice. We were quick, but you never really know once everyone starts pushing. We knew that it was going to be tight – and it was, as expected. This confirms what we knew it practice, but we know it’s going to be a tough race. You never know what can happen in a 12-hour race.”

Johnson, meanwhile, will start seventh, +1.289s in the Ally Cadillac shared with Simon Pagenaud and Kamui Kobayashi. One lap after notching his best lap of the weekend and on his final lap, Johnson spun harmlessly in Turn 16. Regaining control, he spun again in Turn 17, resulting in major damage from an impact with the tire barrier.

Johnson was uninjured, with the damage appearing to be repairable.

“I’m certainly disappointed that I tore up the car for the team, putting them in a difficult position,” Johnson said. “They seem eager and ready for the challenge to get the Ally Cadillac back together for tomorrow. I spun in Turn 16. I was trying to get up and going to catch another flying lap before the session ended. Sadly, I had some debris on my tires as I entered 17 and tagged the outside wall. I learned a couple of lessons there – call them rookie lessons.”

Corvette Racing captured the front row in GTLM qualifying, Antonio Garcia earning the pole with a fast lap of 1m54.910s in the No. 3 C8.R (now silver with red trim), edging teammate Tommy Milner (in the silver with white trim No. 4) by +0.034s.

“It was very stressful,” admitted Garcia after taking his eighth career and second-consecutive pole at Sebring. “With the new rules, we were sharing the track with the GTD category, so that brings a little more excitement into the qualifying. You have to place yourself in the right position to pass them. On my fast lap I had to pass a car into Turn 17, but he didn’t seem to disturb me too much. Sorry if I destroyed his lap, but I had to go.”

The four-stage session included the debut of a unique two-tier qualifying session for the GT Daytona competitors which opened with a 15-minute session for bronze- or silver-rated drivers. Tim Zimmermann, in the No. 19 GRT Grasser Racing Team Lamborghini Huracan GT3, was fastest in the first session following a back-and-forth duel with Jan Heylen (No. 16 Wright Motorsports Porsche 911 GT3R). Zimmerman initially won out, but the No. 19 failed post-qualifying technical inspection and will start the race from the rear of the field. (The car had a Wi-Fi hotspot installed, which is a violation of IMSA’s GTD telemetry regulations.)

Therefore, Heylen’s 2m00.077s claimed the Motul Pole Award – the second straight at Sebring for Heylen. The No. 16 went on to win November’s season-ending Sebring Twelve Hour. 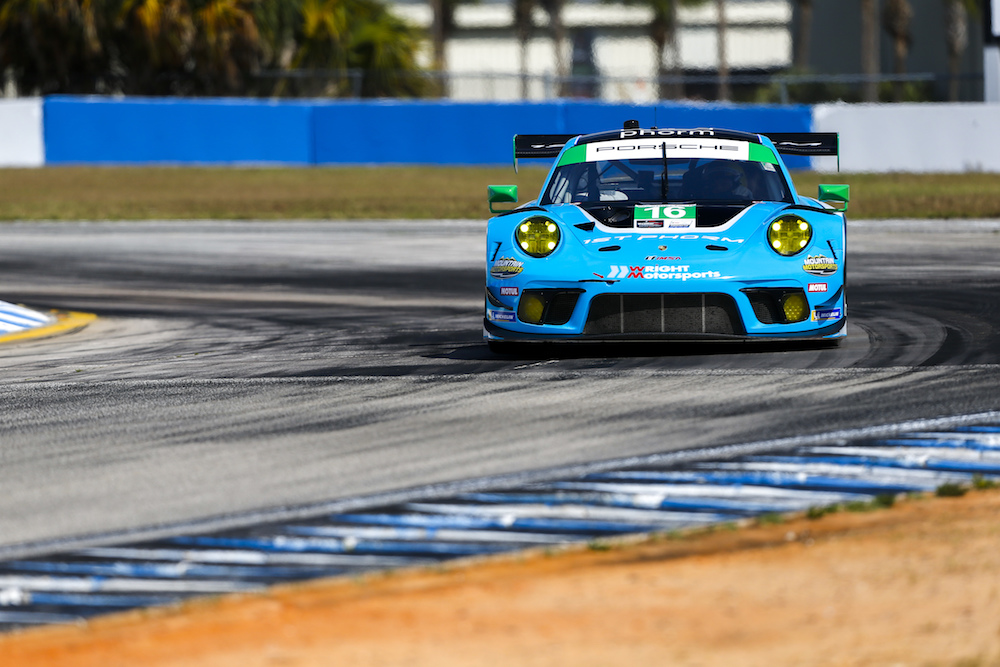 Heylen’s Wright Motorsports Porsche wound up with the GTD Motul Pole Award when the GRT Lamborghini was DQ’d for a telemetry violation. Galstad/Motorsport Images

“That’s a nice surprise,” Heylen said when told he was the pole winner. “Well, you take these things when they come. Unfortunate for the Lambo but we’ll take it anytime. There’s no better way to start the race than from pole position. More than anything, it’s good for the morale; it’s good for everybody in the team. Really looking forward to getting the race started tomorrow.”

Heylen, whose co-drivers are Patrick Long and Trent Hindman, will be joined on the GTD front row by the No. 28 Alegra Motorsports Mercedes-AMG GT3 shared by Daniel Morad, Michael de Quesada and Billy Johnson. Aaron Telitz will start third in the 14 No. Vasser Sullivan Lexus RC F GT3, and teammate Frankie Montecalvo fourth in the No. 12 Lexus, edging Robby Roley in the No. 96 Turner Motorsport BMW M6 GT3 by 0.001s.

Zacharie Robichon went straight in Turn 13 on his opening two laps with ABS failure in the No. 9 Pfaff Motorsports Porsche 911 GT3R. He nosed into the tire barrier, continuing without apparent damage, then went off in the same location moments later, but managed to avoid the tires. He wound up 13th of the 13 competitors.

After a short break, the pro drivers in GTD joined the GTLM competitors in a 15-minute session. The pro drivers were not running for starting position, but would be awarded WeatherTech Championship points for fastest laps. 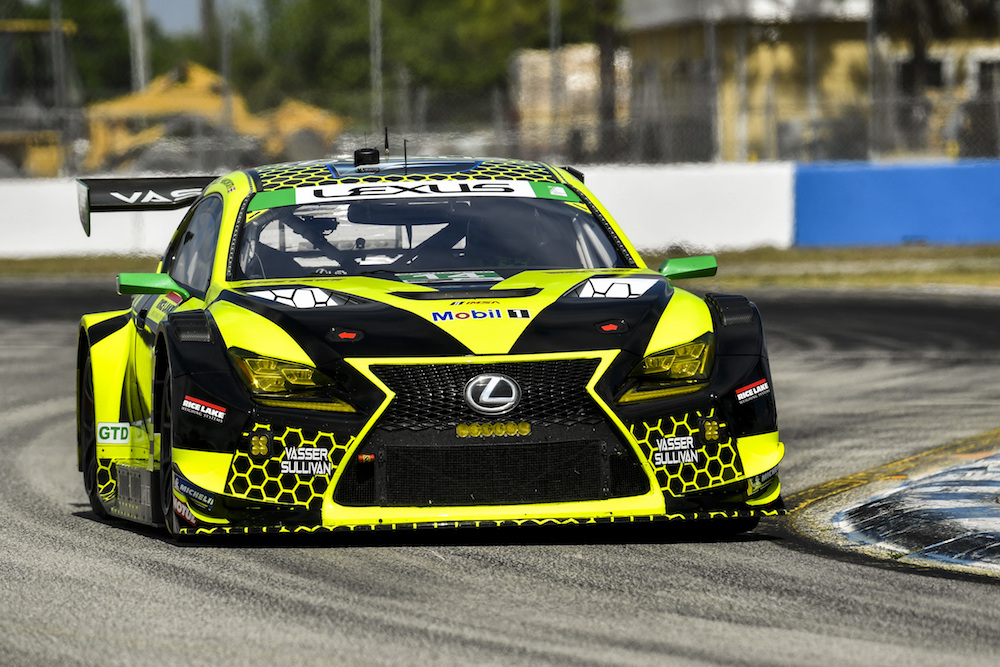 Jack Hawksworth was fastest in the second session, running 1m59.247s in the No. 14 Lexus to earn the maximum 35 points. Second was Laurens Vanthoor, +0.370s in the No. 9 Pfaff Motorsports Porsche, followed by Franck Perera, +0.464s in the pole-winning No. 19 Lamborghini.

“It is a pole, right?” Hawksworth asked. “Obviously, we scored points, and I’m happy with that. I felt we played very straight, but I didn’t see that through the rest of the field. It seemed there were a lot of games being played.”

LMP3 competitors ran for both starting position and points. Performance Tech Motorsports gained the pole, with Rasmus Lindh turning 1m56.001s in the No. 38 Ligier JS P320. Oliver Askew made a flying attempt on his final lap, coming up just 0.065s shy in the No. 7 Forty7 Motorsports Duqueine M30-D08, followed by Rolex 24 winner Gar Robinson, +0.973s in the No. 74 Riley Motorsports Ligier.

UP NEXT: Saturday’s on-track activities begin with a 20-minute warm-up at 8 a.m. ET.

The 69th Mobil 1 Twelve Hours of Sebring presented by Advance Auto Parts will start at 10:10 a.m. on Saturday.