Home / Racing / Countdown to the Rolex 24 at Daytona: GTD

GT Daytona enters the season with what is perhaps its stoutest field in years. As the 2023 IMSA WeatherTech SportsCar Championship season looms with this weekend’s Rolex 24 at Daytona, the full-season grid, as well as the Michelin Endurance Cup, is as strong as ever.

Starting with a review of last year’s champions, let’s take a look at the players. Roman De Angelis won the overall GTD drivers championship, alone at the top because he had different co-drivers in the No. 27 Heart of Racing Aston Martin Vantage GT3. This year he has Aston ace Marco Sorenson, winner of the FIA WEC GTE-Am championship with Ben Keating last season, as his full-time co-driver. They should make a formidable pairing. As for predictions, De Angelis says the picture likely won’t begin to become clear until it’s a little deeper into the season.

“I don’t think we’ll have a great idea until after Daytona,” De Angelis says. “There’s always really strong lineups… you have Paul Miller that’s retaining their Madison Snow and Bryan Sellers lineup, which has always been really strong. Turner always shows up with a very strong lineup. And then some of the newcomers as well, I’m sure will be pretty stout lineups and great teams. So it’ll be interesting to see where everyone pans out towards Sebring and farther into the sprint races as well.”

Inception Racing won the Michelin Endurance Cup, Brendan Iribe and Jordan Pepper taking the honors in the No. 70 McLaren 720S. Last year, Inception didn’t do the full season, but plans to do it this year with Iribe and Frederik Schandorff, with Ollie Millroy joining them for the endurance events. On the Sprint side, perennial contenders Paul Miller Racing with Sellers and Snow took the title in a new BMW M4 GT3. The team only took delivery of the car after Daytona, but wins at Long Beach and Lime Rock delivered them the Sprint title. This year we’ll get to see what the 2018 GTD champions, then with Lamborghini, do with a full season after a year of learning the BMW.

“I think that one of the best things about our program is we have very little turnover internally,” says Sellers. “And when I say very little, it’s actually no turnover. We are still basically equipped exactly the same as we have been since 2017. So  I think the strength of our program is the people behind it, our crew guys, our engineering, management, all that kind of stuff. So in that respect, I think will be very good. We still have quite a bit of learning to do, I think, on this side with the BMW, but I think we’ll be in good shape and I think we have a good grasp on it. But we still have quite a bit to accomplish before we can just say, ‘Hey, we’re showing up every single weekend (as) the car to beat.’”

The Paul Miller Racing squad heads into the season with a year of BMW experience to build upon. Jake Galstad/Motorsport Images

Frankly, any of these teams has a solid shot at the GTD championship, but there are a host of others that have shown some promise. Starting with Winward Racing, Russell Ward and Philip Ellis would have been in the thick of the fight for the title had it not been for some minor errors and bad luck. At the end of the season, they seems to have turned that around and took a couple of victories late in the year. Already off to a good start to 2023 with the pole position for the Rolex, the No. 57 Mercedes-AMG should be a familiar sight at the front of the field.

Fellow Mercedes-AMG runners Team Korthoff Motorsports should be a contender as well. Surprising everybody with their strength in the 36 Hours of Florida, Mike Skeen and Stevan McAleer kept that momentum up and McAleer was fighting for the title well into Petit Le Mans. That strength earned the team a Mercedes ace in Mikael Grenier, who will partner with Skeen for 2023 in the No. 32 after McAleer was moved to Gold in the FIA Driver Categorization.

“I think we surprised ourselves and a lot of other people here last year, and then being able to kind of continue that effort throughout the year,” says Skeen. “And we learned a lot along the way. A lot of people have changed within the program as well. I have all the confidence in Mik as a co driver this year. And I think we’ll be really strong on that front. But also more than that, we made really positive changes with the personnel, and I think our over-the-wall efforts will probably be a lot better this year. Hopefully that’ll put us in better positions to capitalize on some of the performance we had last year.”

Driver Categorization has also affected the longtime pairing of Bill Auberlen and Robby Foley in the No. 96 Turner Motorsport BMW M4 GT3. Foley is now a Gold, so Auberlen moves to the new No. 95 entry for Turner, which will be a GTD PRO Michelin Endurance Cup campaign. Foley now has the very capable Patrick Gallagher co-driving with him, Michael Dinan joining in for the endurance races.

Frankie Montecalvo had strong qualifying results in 2022, but he and Aaron Telitz couldn’t convert those into wins in the No. 12 Vasser Sullivan Lexus RC F GT3. That included getting taken out from pole position at Canadian Tire Motorsports Park. If they can turn that around, they may be a force to be reckoned with. 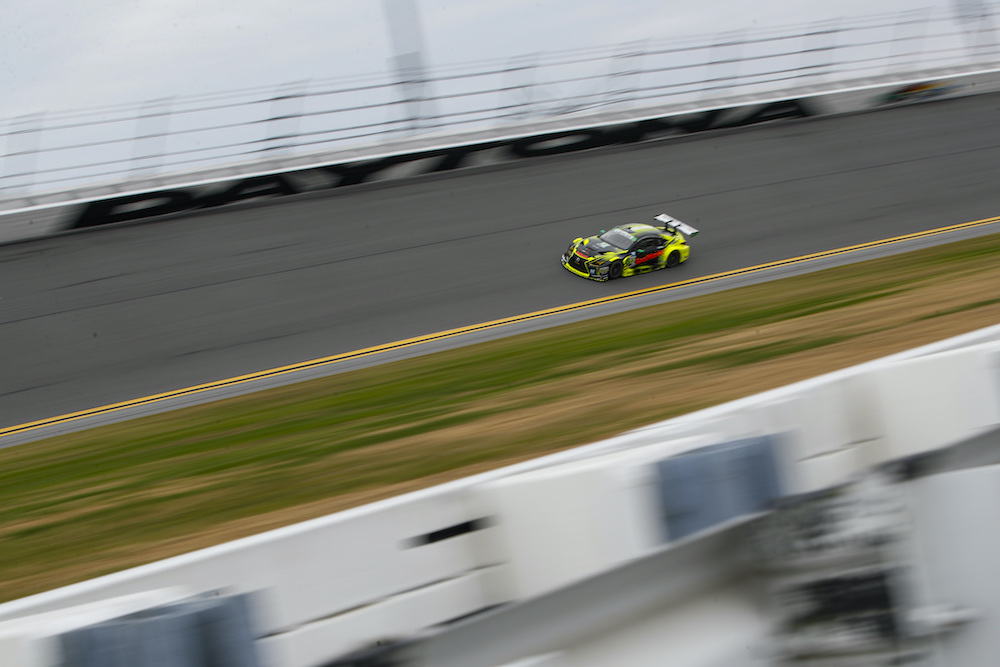 There are no concerns about the pace of the No.12 Vasser Sullivan, Lexus RC F GT3, but full-timers Frankie Montecalvo and Aaron Telitz will be hoping for a little more good luck in 2023. Jake Galstad/Motorsport Images

Jan Heylen and Ryan Hardwick, who took victories at Daytona and WeatherTech Raceway Laguna Seca last season and remained in the championship hunt all year, haven’t committed to a full season in the No. 16 Wright Motorsports Porsche 911 GT3 R. Otherwise they would certainly be mentioned among the contenders.

Last year, Wright was the only team running a full season with Porsche. This season, with the new 992-generation of the 911 GT3 R, there are at least four. Wright added a second car for Alan Brynjolfsson and Trent Hindman. If Brynjolfsson can get up to speed in the GT3 car, last year’s Michelin Pilot Challenge Grand Sport champions might make a mark. MDK Racing has the No. 53 for Mark Kvamme and Trenton Estep. AO Racing joins with PJ Hyett and Seb Priaulx in a team co-owned and run by Gunnar Jeannette. Kellymoss comes with two new Porsches, aided by Riley Motorsports, one for Carrera Cup North America star Kay van Berlo and Alan Metni, the other an MEC effort for David Brule, Alec Udell and Andrew Davis.

Another new full-season team, although familiar, is Gradient Racing running the No. 66 Acura NSX Evo22 for Sheena Monk and Katherine Legge. Former IndyCar driver Legge has been a regular in IMSA WeatherTech Championship competition and is familiar with the Acura, having driven for Michael Shank Racing when it ran Acura’s program in GTD. Monk is new to GT3, but has performed well in MPC Grand Sport, and the two have some history.

“I was part of Sheena’s first ever racing experience, when she did her first race ever in Lamborghini Super Tofeo,” Legge explains. “I coached her for a year in Trofeo and then she went on to gain a bunch of experience in GT4. I didn’t have much experience working with Sheena or what she was capable of since that time and holy moly, she’s come a long way. She has impressed everybody in the team and within HPD and Acura.”

Forte Racing comes to the championship with a new Lamborghini Huracán Evo2 run by US Racetronics and Shane Seneviratne. Loris Spinelli and Misha Goikhberg will compete the full season in the No. 78.

Then there are a host of MEC-only teams to provide a little extra excitement for the endurance races, including a couple with the new Ferrari 296 GT3. AF Corse will field the No. 21 with Simon Mann and Luis Perez Companc the core driver lineup. 2022 12 Hours of Sebring winners Cetilar Racing will also have one, the No. 47 with the Daytona lineup of Roberto Lacorte, Giorgio Sernagiotto, Antonio Fuoco and Alessandro Balzan. Iron Lynx, including the Iron Dames, will be fielding a couple of Lamborghini Huracans as they prepare to introduce Lamborghini’s LMDh car next year.

Magnus Racing returns with the No. 44 Aston Martin Vantage for John Potter, Andy Lally and Spencer Pumpelly. Finally, after testing the waters at Sebring last year, GT World Challenge America Pro-Am champ Ashton Harrison, along with Kyle Marcelli and Danny Formal, will race a Racers Edge with WTR-fielded Acura in the MEC.