There’s a tremendous amount of excitement brewing for the upcoming Mecum Monterey Auction scheduled to take place August 18-20 at the Hyatt Regency Monterey Hotel and Spa. The setting is on the lawns of Del Monte Golf Course, where perusing the vehicles up for auction is easy on the feet, and what an amazing selection of featured lots there are for Vintage Motorsport readers looking for that special collector car, motorcycle or race car — some 600 vehicles in total.

Two distinct and exceptional cars caught our eye, either one that could add immeasurably to any collection, cars that, ironically, were huge rivals back in the day.

Can’t miss a Roman Red Corvette, especially one with wider wheels and small hubcaps, and Fuel Injection emblems on the fenders.

Let’s look first at Lot F36, a matching-numbers, 1961 Big Brake, Fuelie Corvette, resplendent in factory Roman Red with red interior. Fitted with the Auxiliary Hardtop, what is immediately apparent to Corvette aficionados on this car is the lack of full wheel covers. That’s because this Corvette was ordered with RPO 276, wheels that were one-half inch wider than stock, necessitating the use of small 1960 Chevy passenger car hubcaps.

In 1961 Corvettes got four taillights and a new rear treatment. This one is fitted with the removable hardtop.

This “Fuelie” is all business, optioned perfectly for performance, with the ultra-rare RPO 687 “Big Brake” package, only 233 so-equipped.

Rarer still, this car features RPO 687, the Heavy-Duty Brakes and Special Steering package. This consisted of special front and rear shocks, air deflectors to route air to the front brakes (known as elephant ears), scoops for both front and rear brakes, a front suspension unit that included a quick steering adapter, segmented front sintered-metallic facings, finned drums, and cooling fins in each brake. The price of the option in 1961 dollars was $333.60, and just 233 Corvettes were so equipped.

All red, the twin-bucket interior features a 160mph speedometer and 4-speed shifter, and not equipped with a radio.

From bumpers to bumpers, this rare Corvette passes muster in every way imaginable, as close to perfection as any Corvette connoisseur can imagine.

The 315hp, 283cid V8 is detailed as it came from the factory, with all correct components and labels. 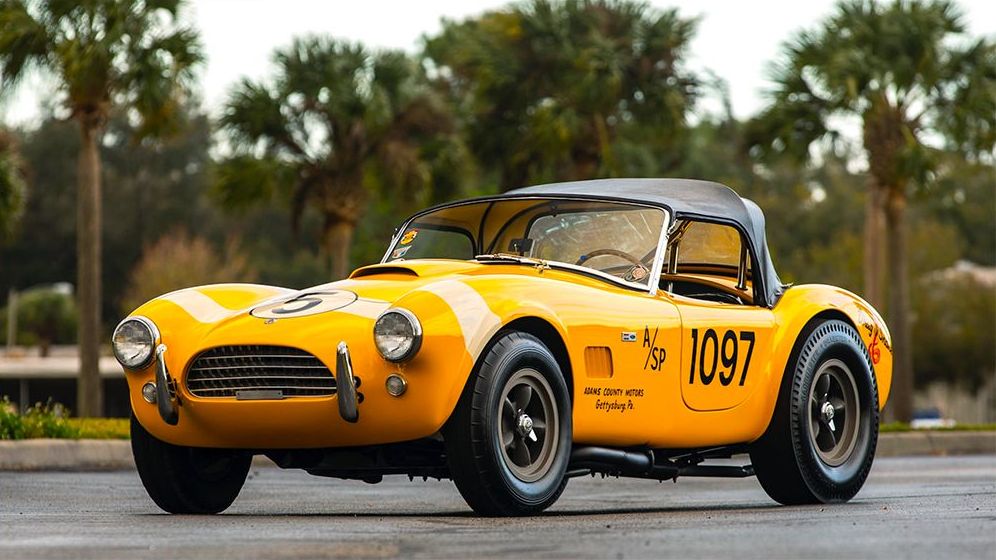 Cobra CSX2427 is impeccably restored to its original, 1965, as raced condition.

Shelby Cobra enthusiasts think mostly of Cobras as ferocious, road-going sports cars, with world championship racing heritage, winning on road courses from coast-to-coast, and in Europe and the UK. From 1962 to ’66, Cobras were the nemesis of Corvette racers.

Yet, Cobras also dominated a very specialized form of racing in attacking the quarter-mile, soon winning and setting national records in both NHRA and AHRA drag racing. The rare Cobras built for this competition were called Dragonsnakes, and Shelby built five with this factory package. In early 1964, interest for this within the company arose when three production department shop employees desired to have a racing program of their own. Hot rodders at heart, Jere Kirkpatrick, Tony Stoer and Randy Shaw had bugged Carroll Shelby enough about a drag car that he finally relented, allowing them to build a Cobra for the drag strip, and a well-used promotional Cobra (CSX2019) was provided. It was modified for drag racing use, with re-arched leaf springs, radiused rear-wheel arches and a full house 289 with Bellanger exhaust headers. 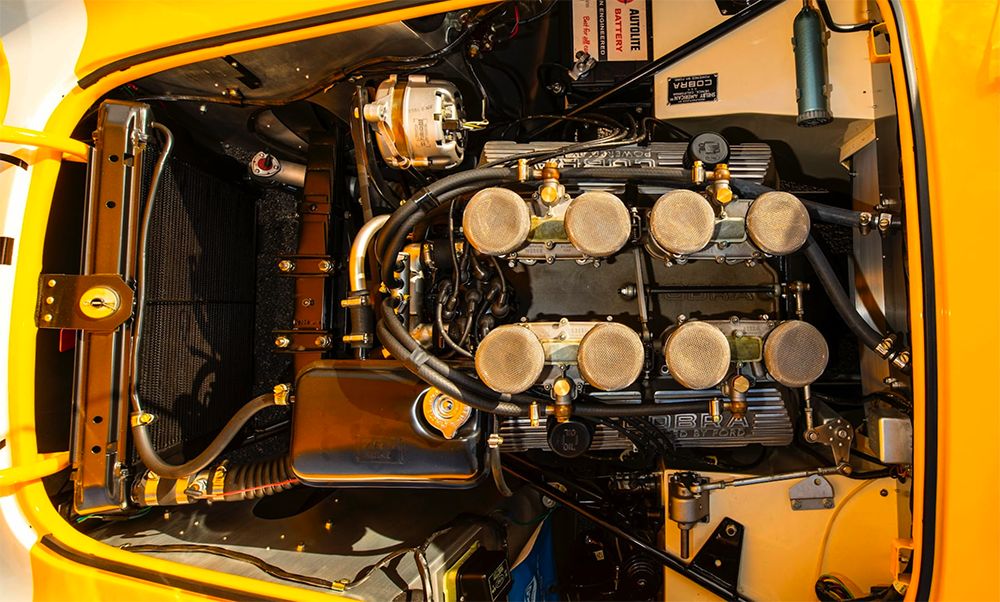 The one and only Stage III, high-performance 289cid V8 propelled this car to high-11 quarter-mile times running in NHRA A/SP and A/MP classes.

Success was immediate, and mid- to high-11 second times at about 115mph were typical quarter-mile times for the Dragonsnakes. Wherever they raced, the Dragonsnakes dominated the A/SP class of drag racing.

One of the most special of these cars is CSX2427, a factory-prepared customer Dragonsnake, the only “Stage III” ever sold, and also the only yellow Cobra ever built. 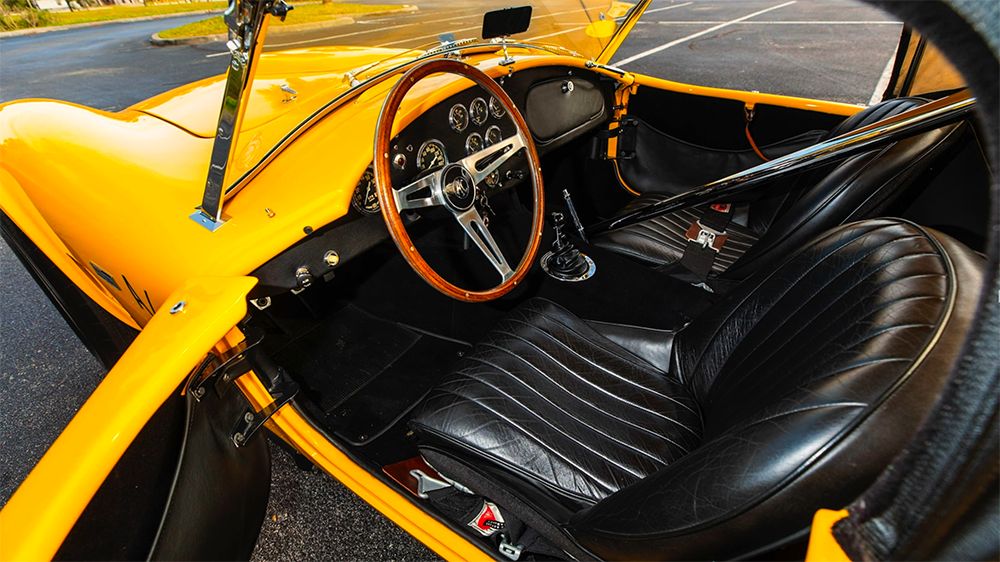 Interior is stock Cobra, and for safety at the strip, a chromed roll bar with support was added.

From new, when Don Reimer of Gettysburg, Pa., took delivery at the local Adams County Motors on August 3, 1964, paying $8,695 plus a $305 freight charge — the car’s history has been fully documented. Reimer and his younger brother Mike had only one goal in mind for the only “Stage III” Dragonsnake Cobra ever sold — to campaign the Cobra in drag racing, with its special suspension, 4:56 rear axle, M&H Racemaster slicks, drag shocks, Hurst shifter, and quadruple “Stage III” Weber carburetors.
They had ordered it in special-order yellow to match the color of their Thunderbird tow car.

Just over a year later, CSX2427 was sold to its second owner in Indiana, later going to its third owner in July of 1966, when it was converted for SCCA road racing. Repairs after a crash saw it refinished in candy apple red, but by the time it was sold in May of 1969, it was yellow again. 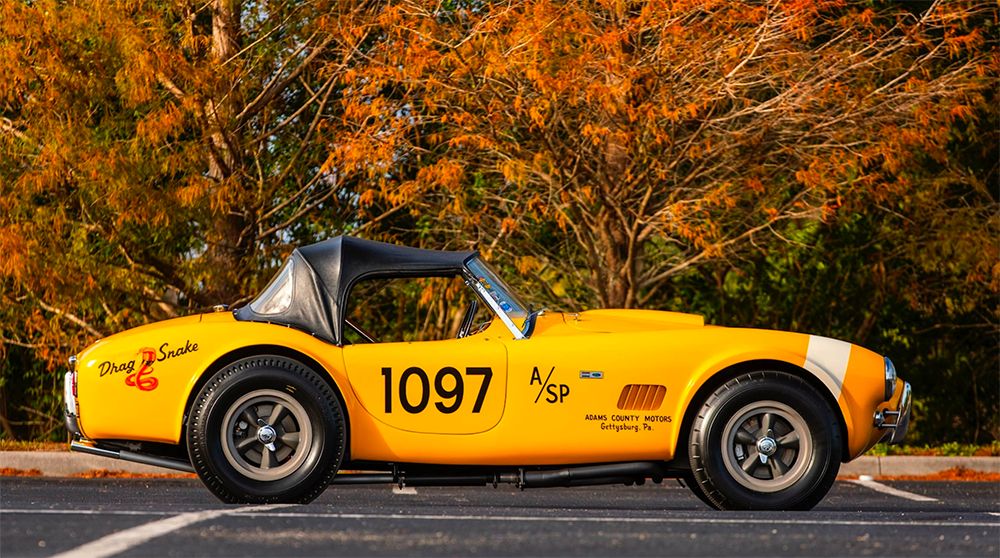 It’s ninth owner, Steven Juliano, was its salvation. He began a concours-level restoration on the way to returning it to its original Dragonsnake configuration. Original owner Mike Reimer was consulted to assure maximum authenticity, right down to the exacting, hand-painted lettering duplicating its original racing livery.

Since that time, the Cobra has won many awards, scoring the highest points score in Shelby American Automobile Club (SAAC) judging history to that point, back in 2009. It has also been extensively featured in books and numerous magazine feature stories. This has to be one of the most extraordinary Cobras in existence.