My search was on for the perfect road-trip vehicle, I just never anticipated the answer being a pickup.

The trip was a one-week round tripper, hustling from Los Angeles, Calif., to Lincoln, Neb., as quickly as legally possible to attend the 2021 Tire Rack SCCA Solo National Championships. Door to door, Google Maps claimed the journey would come in at 1,536 miles each way, although Google’s estimates are often down a few miles due to road-trip excursions for gas, food and a place to rest. I also only had two days to get there, and I wanted to arrive in Lincoln early enough for a good night’s sleep before heading to the event.

My plan involved a first-night stop in Denver, some 1,053 miles away, leaving me to knock out an easy 483 miles on day two. Google’s estimate put day one at nearly 15.5 hours of driving, meaning if I hit the road at 7 a.m., I’d reach Denver at 11:30 p.m., given the time change. Doable, but I wanted to shave time, and one way of doing that (without speeding) is stopping for fuel as little as possible in order to maximize the mile-per-hour average.

Bizarrely, while I originally started my search for a hybrid to achieve this, I didn’t think I’d end up with this hybrid.

I’ve been performing a series of new-truck towing evaluations this year, and one thing that caught my eye was Ford’s F-150 PowerBoost Hybrid, which sports a 3.5L twin turbo V-6 motor with 430hp, 570lb-ft of torque (thanks in part to a supplemental hybrid-electric powertrain), up to 12,700 pounds of towing capacity (if correctly equipped) and – what drew me to it for this evaluation — an astounding single-tank range.

Optioned for maximum distance, which largely means a 4×2 version, the F-150 PowerBoost Hybrid is rated at 26mpg freeway, meaning the truck should be capable of traveling about 780 miles before burning through its 30.6-gallon gas tank. So I called Ford for a loaner.

The PowerBoost that was available for evaluation purposes was a loaded 2021 Ford F-150 Limited 4×4 SuperCrew. This tester came with nearly every bell and whistle you could imagine, which was wonderful, but that also meant the truck sported a 24mpg EPA freeway rating. But 24 x 30 = 720, thus my mileage goal was still on, since that meant only one fuel stop on day one of my trip, and no stops come day two.

Incidentally, due to the fact that the F-150 PowerBoost is a hybrid, it’s also rated at 24mpg in the city.

All of this was in theory, as real-world application often yields different results. My specific real-world trip for day one involved heavy elevation gains, starting at roughly 800 feet above sea level and traveling to Denver’s 5,280-foot elevation, passing through the 11,013-foot-elevation Eisenhauer Tunnel in the process, plus elevation gains and losses along the way. Also, speed limits north of Las Vegas are largely 80mph, which combined with headwinds through Utah didn’t help the truck’s mileage.

Along the way, I wanted to test the F-150 PowerBoost’s absolute range, so I filled the truck to overflowing on day one, tossed a plastic five-gallon jerrycan in the bed, and ran the truck dry. A tick over 583 miles later, I rolled to a stop at the side of the road somewhere in Utah. This is far short of the theoretical 720-mile range, but it should be noted that I was also going uphill at the time, and had been for a while, at a hair over 80mph.

That day, I averaged 76mph, knocking nearly 1.75 hours from Google’s estimate, which was operating on the assumption of a 68mph average. Had my vehicle’s range been limited to closer to 300 miles, I would have hit the pumps at least two additional times compared to this F-150, and Google’s estimate would have likely been correct. Instead, my head was on the pillow early, and I’d barely run over the speed limit to do so.

One week and some 3,000 freeway miles tallied, my mile-per-gallon average came to 19.7 per the vehicle’s trip computer. Comparing my full-to-empty experiment, I also discovered that Ford’s in-dash mileage estimator was correct, down to the tenth.

What about the rest of the truck?

I’ve been reviewing a lot of trucks for towing this year, and I discovered on this cross-country adventure that my “needs” and “wants” for a road-trip vehicle differs drastically from when I’m pulling 6,000lbs for just a few hours. 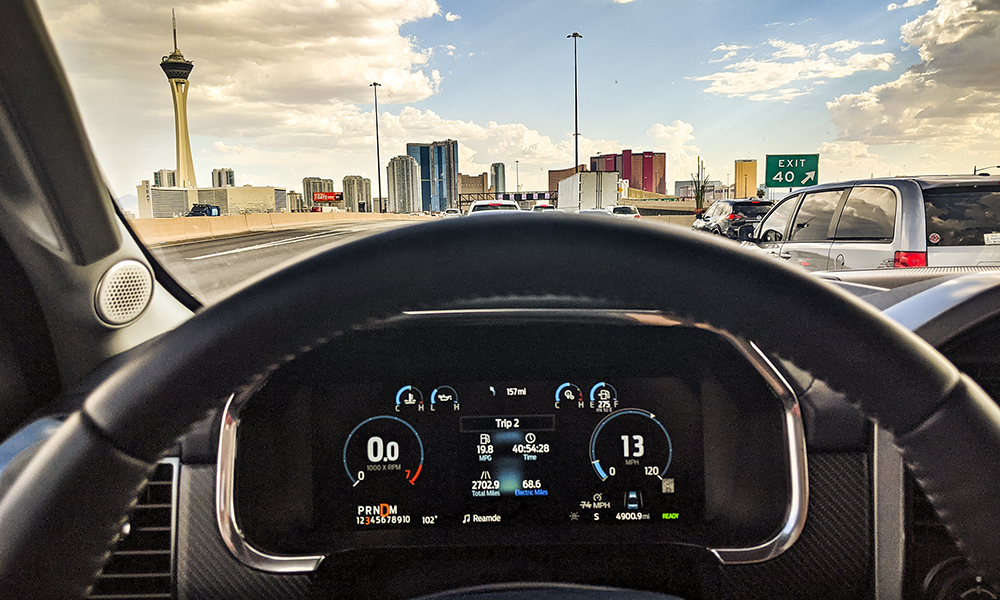 For one, I’ve never considered air-conditioned seats a necessity even on the hottest of days, but when bathroom breaks come earliest at the 6.5-hour mark, my butt tended to warm in the seat quite a bit. The cool air flowing through Ford’s perforated leather, for lack of a better expression, saved my behind.

Similarly, the F-150 Limited I tested came equipped with an upper back angle adjuster on the front seats, and I used the heck out of that to dial in my ideal seating position. Combining that with the adjustable pedal box and steering wheel that would extend so far toward the driver that you could almost steer from the rear seats, and getting comfortable was not a concern.

I’m no fan of lane centering or self-driving controls, still, I gave both a shot on this journey. When I was fresh, Ford’s Co-Pilot360 features made me nervous, so I drove old school. As daylight dwindled and I had logged well over 10 hours behind the wheel in one day, I suddenly appreciated Ford’s Active Drive Assist hands-free driving – it offered just enough help to keep me safely underway.

I’m old school, and consequently, mechanical gauges are more my jam. That said, I loved the digital cluster in the Mustang Bullitt I tested a while back, and the F-150’s digital display was every bit as good. Also of benefit was the fact that the speed limit would appear on the speedometer, even getting construction zone speed limit changes correct. Nothing dings your average speed more than a ticket.

Oddly, the turn indicator arrows would shift on the dash depending on whether navigation was activated or not. Initially, this was concerning, then I got used to it.

The 12-inch center screen was a homerun in every respect. I’m no infotainment aficionado, but even I appreciated the intuitive Sync 4 interface. In fact, I chose to use Ford’s navigation over Android Auto, which says a lot about Ford’s system.

Slots were aplenty on the center console, with ample places for receipts, cell phones, beverages, hand sanitizer, and various whatnot. When parked, the gear selector could also retract into the dash to allow for the center to fold open for a workspace. Or, in my case, to offer a dinner table while searching the web for nearby hotels. This turned out to be a surprisingly thoughtful feature. 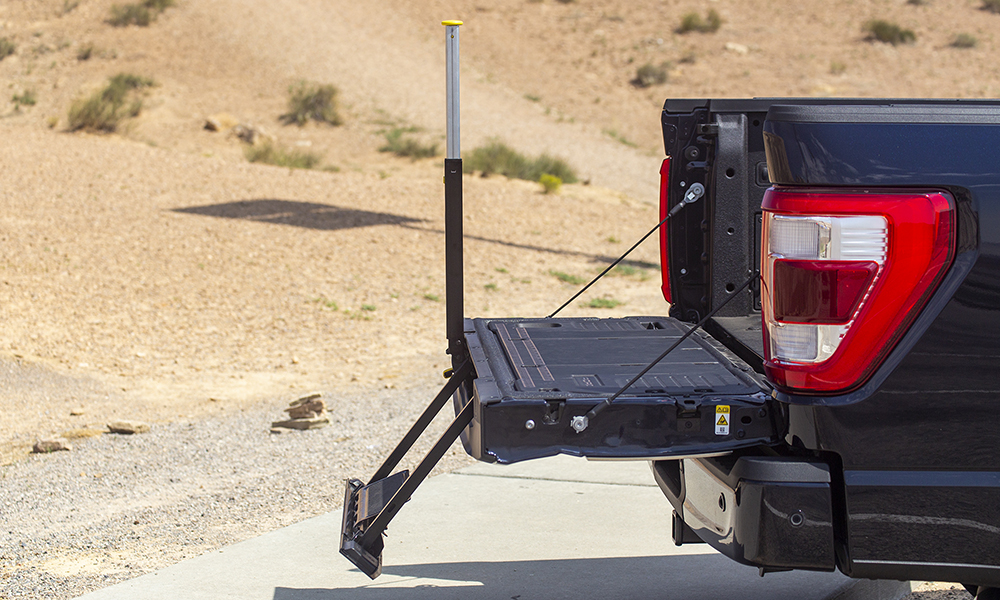 And arguably most important for a road trip was that the F-150 PowerBoost Hybrid, despite being a powerful twin-turbo setup, will run on just about any grade fuel. Should I be pulling a heavy load, I’d be filling the tank with premium. But blasting down the freeway unloaded, 87 octane was the least expensive, so that’s the fuel that flowed. It may have impacted my fuel economy, but I also ran through a tank of 91 octane as a test and didn’t notice an appreciable difference.

With insane half-ton towing capabilities and an unladen freeway range between 580 and 780 miles (depending on options and driving conditions), the F-150 PowerBoost Hybrid was impressive. But is it worth the $79,145 sticker price my 2021 Limited 4×4 SuperCrew came with?

Catch your breath. It’s alright. The PowerBoost Hybrid doesn’t really cost that much. In fact, it’s only a $3,300 option over the XLT trim’s $41,965 base price.

Meanwhile, a Lariat built to my road-trip specs – which includes upgrading to the 7.2 kW Pro Power Onboard and adding the surprisingly useful tailgate step, but excludes the twin panel moonroof I didn’t find very useful – rings up just under $65,000. Or, for $10,000 less than that, you can build a somewhat comparably equipped XLT PowerBoost Hybrid, be it without some of the creature comforts I quite enjoyed after 3,000 miles on the road.

Modern half-ton trucks are not what they used to be. Through the years, many have noted that their tow capacities meet or exceed what you had to buy a three-quarter-ton truck for just 20 years ago. But today, I’m also surprised to find that modern half-tons like the Ford F-150 PowerBoost Hybrid are not just ideal tow rigs, but also wonderful for road trips.