Home / Basketball / Nick Lagios: The GM of the first Mexican team in the G-League dreams of working in the EuroLeague

It’s not often that we see a European GM doing the rounds in the NBA G League and the case of Nick Lagios is it particularly interesting one. Eurohoops spoke with the Greek-American GM who has worked with the South Bay Lakers for the past five years, as the man behind the evolution of the young Lakers players. Lagios has now taken GM duties in the Mexico City Capitanes, the first-ever Mexican team in the G League.
31-year-old Lagios talks about winning the championship for Kobe Bryant, working with Kostas Antetokounmpo, while he gave props to Nick Calathes and stated that he dreams of working with a Euroleague team sometime in the future.

Eurohoops: How did you decide to take on this journey?

Nick Lagios: I always had a passion for basketball and I wanted to become a GM even though I didn’t think this would be possible. Ever since I was in college at Stanford, that was my goal and I was working towards it. Then I went to work in Australia and in the last five years, I was in the Lakers organization. There were times when I thought I wouldn’t make it. You know, here in the USA and in many places in the world basketball doesn’t pay well, so I had to work in other places, but I reached my goal to become a GM.

I have seen that you posted on Instagram a picture with the championship ring with the Lakers. How was this experience?

In general, in the United States, your family is linked to basketball. To win a championship with the Lakers was something incredible. it was a dream come true and it was the best transition, to win a ring with the Lakers and then move to the Capitanes. And to have Kostas Antetokounmpo with us was really great as well.

2020 began tragically with the loss of Kobe Bryant. It seemed as if there was an “obligation” for the Lakers to win the championship in order to honor Kobe. Have you felt that?

You’ve worked with Kostas Antetokounmpo in the Lakers. How is he as a player and as a person?

He’s a great player for someone to work with. I remember him in the pre-draft training and I see and how far he’s come. Of course we also have the Greek connection which is really nice. He’s a great person and it was a pleasure to work with him. Every year he becomes better and he’s one of the players that can get a stable or role in the Lakers.

How did you get in contact with the Capitanes?

When I first learned that there would be a Mexican team I knew I wanted the job. My passion is basketball but I also love learning about new cultures and civilizations. To work in another country and to learn its culture, its language is something really great. I talked with the G League, with a few agents, and a few people who knew the owners. I just wanted to get my CV through them. I never thought I would get the job because there were many people looking after it and I didn’t speak Spanish. When I booked an interview I knew I had chances due to my experience in the G-League.

Do you watch any European or Greek basketball?

I watch many players in Europe. One of my key tasks with the Lakers that I will also Implement with the Capitanes is to find players that already are professionals and can live up to our level. Every day I check out players for one or two hours. I don’t watch games, but many videos with players. I would love to work in Greece and Spain, or in another basketball country. Many people call me crazy because my dream job is to work as a GM or president in the Euroleague. I think it would be a great experience working in a European team or a top-notch Greek team and I would love that in the future.

Do you have a favorite Greek player?

He’s Greek American, but I’ve always loved watching Nick Calathes and how far he has evolved. We also have the same name! He’s one of the players that you truly love to watch. He’s my favorite Greek player.

Rick Pitino is the head coach of the Greek national team. Do you think that he can transmit his triumphs in college basketball to the NT?

It’s interesting that there is no other American coach in Europe. I really believe he can achieve great things with the NT. He’s one of the greatest coaches in college basketball he was very successful with Panathinaikos and I think he can make it with the NT. 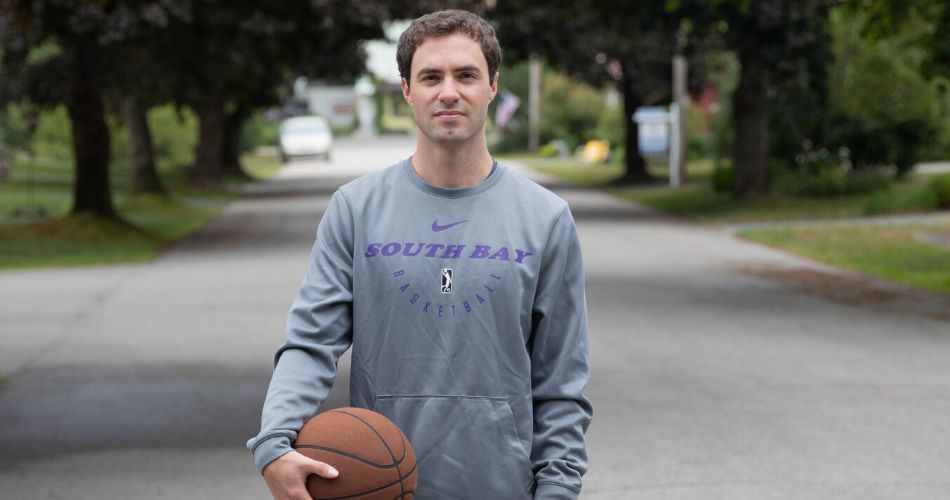 How is the situation with Giannis in the USA? We see flags everywhere he plays and the Greeks living there show their support in every way.

What happens with Giannis is really beautiful. Even in Los Angeles, where there are not many Greeks, you will see Greek flags in the stands. It’s really awesome to see that for me as a Greek American. I never thought I would experience that. I know basketball is big in Greece but to see this impact in the United States as well it’s a great thing. It makes you tear up.

One last thing. we have a Greek MVP, a Greek champion, a Greek DPOY, isn’t it time for a Greek GM to work for an NBA team?

I hope so! And why not a Greek coach as well. There are top-notch Greek coaches all around the world, so it would be possible for some to be in the NBA. I say the same for GMs. A Greek can make it to this position.

The post Nick Lagios: The GM of the first Mexican team in the G-League dreams of working in the EuroLeague appeared first on Eurohoops.