Rucker Park, famously known for producing some of the top basketball players in history, underwent $520,000 renovations funded in part by the National Basketball Players Association (NBPA) and reopened on Saturday.

“I want to thank the community of Harlem, we don’t view this as a gift we are bringing to Harlem, we view this as a thank you for giving us the gift of the Rucker. This is a place that created, encouraged, and inspired the best basketball players in the world,” remarked NBPA Executive Director, Michele Roberts, who grew up in the Bronx not too far from Rucker.

Renovations began on August 26, 2021. The refurbishing of the Greg Marius Court at Holcombe Rucker Park upgraded the pavement and repaired all cracks, all new asphalt and paint on the court, bleachers, custom baskets donated by Spalding, backboards, and scoreboard. Also, team benches were added to both sides of the court. The NBPA Foundation will fund for three years a new park manager position to work directly with NBPA grassroots and facilitate events at the park for the community members.

Funded by the NBPA, the renovation of Greg Marius Court at Holcombe Rucker Park began in late August with the intention of preserving the rich history of the park. pic.twitter.com/5OKiw4bYTI

The artwork on the actual court has been designed by A$AP Ferg, a rapper and artist who grew up in Harlem and has a real connection to the park. This element shows that the NBPA is committed to keeping this renovation authentic to Harlem and its culture. 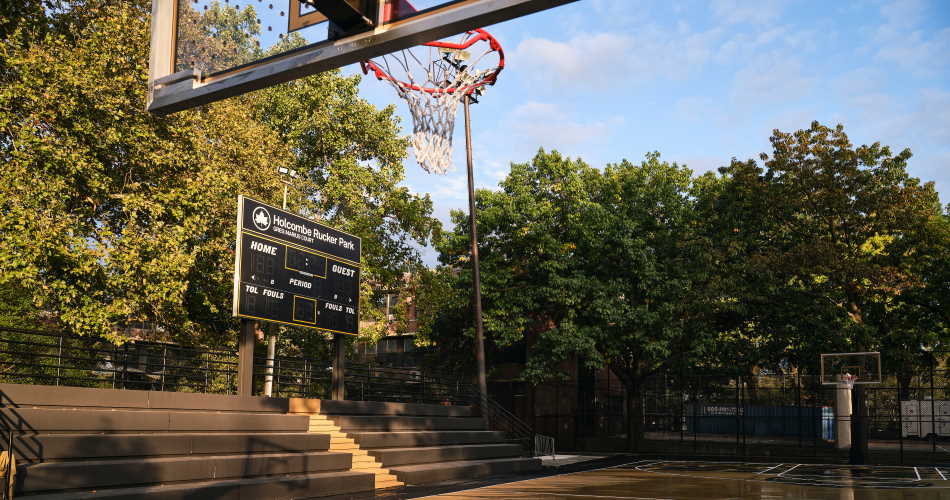 Rucker Park, located in Harlem, Manhattan, New York City, was named after Holcombe Rucker, a local teacher and playground director. In 2017, the court was dedicated to Greg Marius, founder of the Entertainer’s Basketball Classic streetball tournament held at the park. Participants of the tournament had featured Kobe Bryant, Allen Iverson, Kyrie Irving, Julius Erving, and Wilt Chamberlain, among others.

The New York City Department of Parks and Recreation partnered with the NBPA in the complete renovation aiming to reestablish the court as a state-of-the-art basketball venue for future events at the park, considered the essence of streetball.

The project celebrates the past, present, and future legends of Rucker Park, one of the most legendary courts of the world but also a key part of New York City’s basketball culture.

The post NBPA, Michele Roberts proud of the renovation of Rucker Park appeared first on Eurohoops.